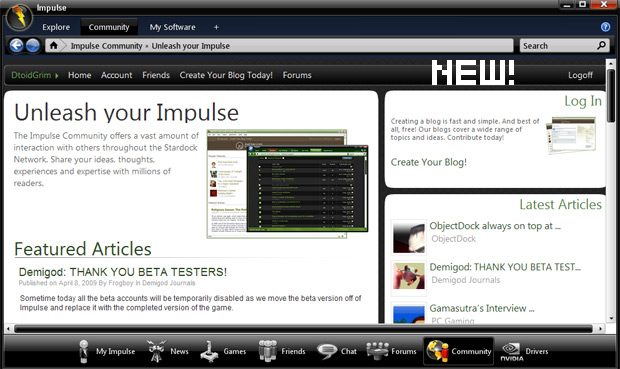 Today will undoubtedly be a day of celebration for Stardock, for digital distribution platform Impulse got its third major update yesterday, and it was a doozy. Seeing as how one of the most noticeable changes for the client is a sleeker user interface, it’s only fitting that I outline the other additions using bullet points.

Wow, that’s a lot of text. My thoughts on the new Impulse? It’s inching closer and closer to rivaling what Steam offers. Don’t get me wrong, that point isn’t coming any time soon — Impulse needs more publisher support — but it is coming, and that’s kind of a big deal.

Impulse Phase 3 includes five major new features that developer Stardock believes will be compelling to both PC users and software publishers. These new features are:

1. The Impulse client has had its user interface significantly improved and updated with features such as player rankings, achievements, intelligent match-making, and more. It also includes a new tray application that lets users track friends, receive update notifications, and much more.

2. The beta of Impulse Anywhere, a new web-based method for users whose home Internet connections are non-ideal to download their software on another machine, take the files home and install them.

3. The release of Impulse Reactor, a development platform that lets users add many new features to their games without having to re-distribute a third-party client (i.e. users don’t have to distribute the Impulse client). Impulse Reactor includes features such as intelligent match-making, multiplayer tournament support, NAT negotiation, friend lists, rankings, community features and much more. Gas Powered Games’ much anticipated PC game, Demigod, is being released next week and makes full use of Impulse Reactor.

4. Impulse Reactor Overlay, an in-game overlay that lets users instantly access chat, friends lists, profile data, micro-expansions, and more. Demigod will also be the first title to make full use of this.

5. Game Object Obfuscation (Goo) – An alternative method for developers to protect their intellectual property. Goo allows developers to associate licenses with people rather than their PCs which will eliminate the issue of “limited activations”. It also provides the underpinnings to support vendor neutral software downloads and transferring of licenses.

“One of the key things about Impulse Reactor and Goo is that it’s a win-win for users and publishers. For users, it begins the process of our customers owning their software license. For publishers, it provides the highest level of security for their software but in a way that doesnâ€™t inconvenience legitimate customers,” said Brad Wardell, president & CEO of Stardock.

Stardock is in the process of migrating from traditional activation on its digitally distributed software to Goo and working to incorporate Impulse Reactor into its existing titles.

“Stardock’s well known objection to most copy protection schemes and DRM has been that they penalize customers while pirates end up with a better experience because they don’t have to put up with the annoying copy protection. Our strategy has always focused on rewarding customers for buying our stuff. With Goo, now we can share some of the technologies that have been so successful for us with other developers,” continued Wardell.

One of the first publishers to adopt Goo is Paradox Interactive, whose titles on Impulse will soon be protected via the new technology.

In addition, Stardock and Activision Publishing, Inc. recently signed a distribution agreement which will make select Activision titles available on Impulse in the near future. Stardock expects to add additional major publishers this spring.

“With Phase 3 of Impulse completed, we are now focusing on bringing the catalog of games and applications on Impulse up to parity with what is available on other services,” said Wardell.

Stardock is one of the world’s leading developers and publishers of PC games and desktop software. Its PC games include Sins of a Solar Empire, the highest rated and best selling PC strategy game of 2008 as well as the critically acclaimed Galactic Civilizations series. Its desktop software includes Object Desktop, WindowBlinds, and a host of other programs for customizing the Windows experience. Learn more about Stardock by visiting www.stardock.com.