Simple and accessible, Zynga may be winning yet

Zynga has just released their latest social game endeavor War of the Fallen for iOS, with Android soon to follow. This new card battle game steps up to the plate with hopes of introducing casual game players to the world of collectible card games, as well as satisfying that hardcore itch for more experienced CCG players.

On the heels of Ayakashi: Ghost Guild, Zynga’s popular Japanese card battle game, War of the Fallen has thrown together practically every popular element of collectible card games available on the market in hopes that it will please all audiences. The question is, will it catch? 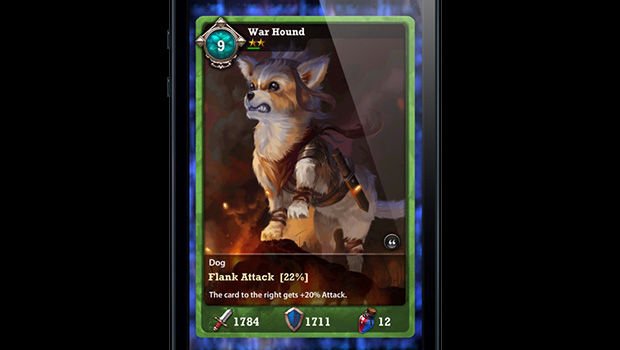 War of the Fallen contains very basic attack principles, but with the aid of 150 cards and over 100 different card skills. At first I was surprised at the gameplay — rather than the back-and-forth strategy battle model of traditional card games, WotF has the player tap on an enemy to unleash cumulative damage and special skills from the combined deck (5 cards). I thought this was insanely simple at first, but after viewing some of the card options I realized that this attack model could contain more depth than I originally thought.

For example, players can strengthen and evolve cards — strengthening involves sacrificing lesser cards to boost stats in a better card, whereas evolving combines two of the same card to create a brand new version. Developers noted that strengthening cards before evolving them tends to be for the best, as players may miss out on stats if they do not strengthen first. Each card has 4 evolution stages, and players can also add gems to cards which contain their own separate attributes. Treasures won from the main quest can also be used to forge new cards. 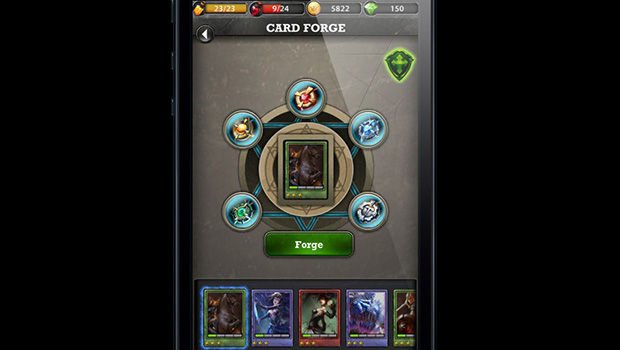 Speaking of questing, War of the Fallen boasts a rich story in which players start out as “Shardbreakers” who set free ancient gods via commanding a set of creatures against demonic beings. WotF gives a choice of three kingdoms to align with which affects the types of drops and bonuses that are won throughout the main quest. The Quest mode contains most of the story elements as well as an interactive progression-based map.

This being a Zynga game, it can’t go without saying that there are social aspects in the mix. Players can join guilds, play against each other, or team up against bosses in the main quest. My favorite thing (surprisingly) is the fact that players can steal treasures, coins, and glory from other players. War of the Fallen also contains a quick battle mode in which the truly hasty can pit their deck against another player’s and find out who won with the click of a button. 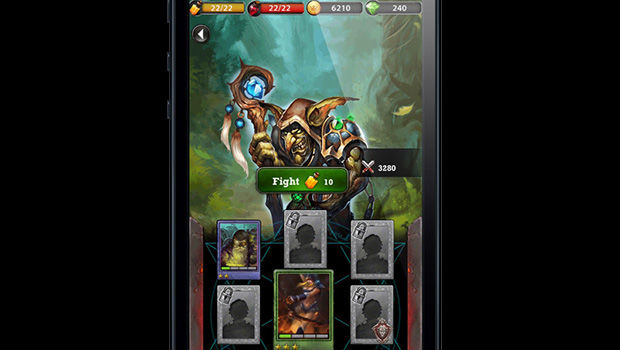 War of the Fallen is free-to-play, but the developers assured me that non-paying players will not be locked out of anything special. Things that can be bought include card packs and consumables (items that are used on cards such as attack mana, protection charms, etc), which fortunately nobody can steal from you during gameplay.

I can see this taking off as an addicting game for players who want short, quick experiences. I’m not sure if hardcore card game players will be completely satisfied, but again I’m also not sure if that’s what War of the Fallen really aims for. The game is not really meant for strategic, lengthy plays but is suited for short bursts like playing while on the subway or waiting for a cup of coffee.

I could tell that some love was put into this game — the cards have pretty decent art, and some of them are quite unique (like a funny-looking humanoid carrot). I truly can’t wait for the Android release so I can give it a spin and start stealing glory from y’all. For those lucky iOS users, give it a try and tell us what you think!