I’m not even sure where to start with Wakfu. It’s an incredibly complex MMO unlike any that I’ve played before. It immediately drew me in with its grid-based strategy gameplay, not dissimilar to Final Fantasy Tactics or the Shining Force series, both of which I have played for countless hours. I was a bit hesitant to see how this sort of tactical approach would work in an MMO setting, and there are definitely a few sacrifices made when making the genre jump.

I’ve been playing Wakfu in its open beta state on and off for the past month or so and I can say that I’ve been enjoying myself. The most recent patch addressed quite a few of my concerns with the early game, so if this article had been written a week ago, it would certainly have had a different, more negative, connotation. I haven’t been able to experience the late-game content (the max level is 200!!), but I have been keeping up with the forums, most of which have late-game complaints. 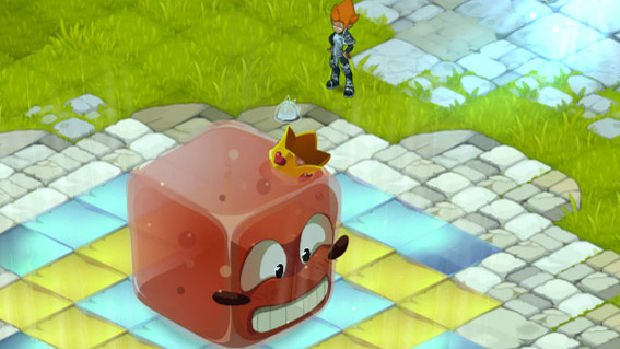 Before I get more into the game itself, let me set up my background. I have no vested interest in the game’s setting, “The World of Twelve.” I have not played Dofus, nor do I really know what that is. I also have no experience with the anime of the same name and art style. Not knowing anything of the universe didn’t prevent me from thoroughly enjoying the game world and its inhabitants, though, so don’t feel as if that would serve as a barrier.

There are two things that make Wakfu stand out from all of the other MMOs: the government and the ecosystem. Each of the four starting nations, which you choose pretty early on, has a mayor, complete with an accompanying cabinet of positions like Army General and Treasurer. Each of these positions is led by a human player who you can speak with and make demands of. Whether or not they listen to you is really up to them. The mayor is elected every two weeks by the players of the corresponding nation and he then appoints his cabinet; however, he can be impeached if his approval rating gets too low. The government also decides the laws of the nation, and what you can and cannot do. The governor can even make a law that rewards you for voting for him in the next election! If you break too many laws, you’ll become an outlaw and be sent to jail if you’re caught (i.e. beaten in a PvP battle). While in jail, you can decide to work off your time or break out, the latter of which will keep your outlaw status. 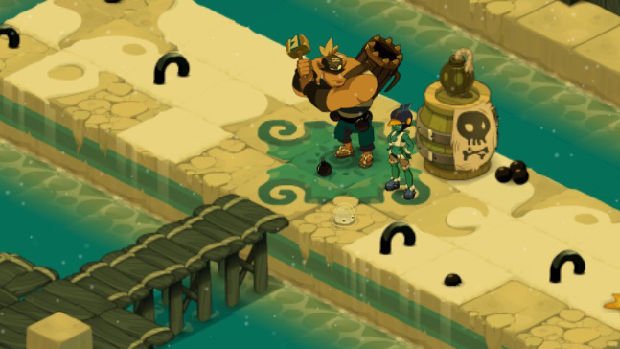 It is an incredibly interesting system, and one that has me a bit nervous. I can’t help but think that, eventually, a governor will get such a strong following that it will be virtually impossible to vote them out. Perhaps he’ll reward just the right kind of people to keep himself in office, creating a huge dichotomy within the nation: those with the governor, and those against him. Though, to the game’s credit, this same exact scenario has happened in the world’s history before and maybe that’s exactly the kind of scenario the developers expect to happen. It seems as if this is all one huge social experiment that can go horribly wrong in all the right kind of ways, but only time will tell.

The ecosystem is not infinite. If you chop down a tree, that tree is gone. If you kill a sheep (“Gobball”), it’s gone. You can make a species extinct if you kill enough of them in a certain area. The way to circumvent this is with “seeds.” Everything, including animals, trees, flowers, and even the weather has seeds which you can plant to spawn new items. If Gobballs are going extinct, then someone in the Trapper profession can harvest their seeds and plant new ones to repopulate the area; or they can just let them go extinct. This also allows players who aren’t too keen into fighting to explore the depths of war: going into a warring nation and destroying their ecosystem is just as strong a blow as fighting in PvP.

Oh, and the game only consists of money, or Kama, that has been minted by players. There are 16 professions in the game, each depending on the others. The miners can harvest ores and turn them into actual currency to be put into the economy. It creates an interesting scenario in which literally every coin you get was, at one time, minted by another player.

It’s an incredible risk. Leaving so much of the world’s fate to the playerbase is sure to result in some sort of disaster, right? Again, only time will tell, but I’m anxious to stick along for the ride and see any sort of demise that might be in store for a nation. 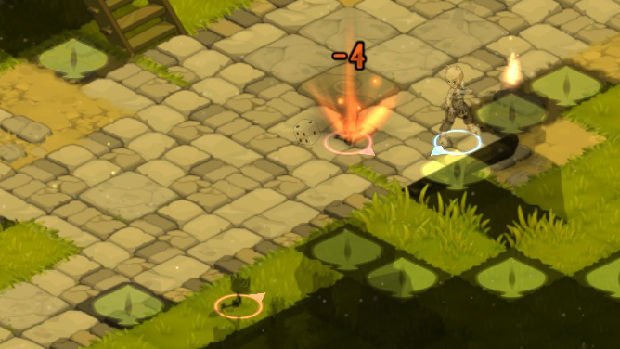 The classes are quite the mixed bag. You’ll find a lot of the traditional classes like ranger, healer, and a melee fighter, albeit with a slight twist, but there’s also my favorite class: Ecaflip. I only recently tried out this class, which depends entirely on luck. Similar to how Cait Sith from Final Fantasy VII or Lady Luck from X-2 worked, the Ecaflip relies on dice rolls and lucky streaks. It’s a very refreshing class to find in a genre that usually follows the dotted lines when it comes to character classes.

So, while keeping all this in mind, there’s also the combat to take into consideration. As I mentioned, it’s a turn-based grid-based strategy combat system that works more or less like you’d expect. The only real caveat here is that each player has a 30-second time limit which somewhat hinders your ability to strategize if you’re in a party. You’re also rewarded with bonuses if you play your turn quickly, which almost seem counter-intuitive to the tactical gameplay. In solo play, it doesn’t become much of an issue, but trying to discuss strategies mid-fight with a group starts to become difficult with the time limit. This probably won’t be much of an issue towards the later levels, but in the early game when you’re not quite sure how the other classes in your party work, it’s hard to coordinate.

Each class has three trees of elemental moves that level up the more you use them. They also have ten Specialty moves that focus on something specific to that class, five of which are always passive. For example, the Ecaflip has a passive skill that will draw a random tarot card, good or bad, in the beginning of each turn. 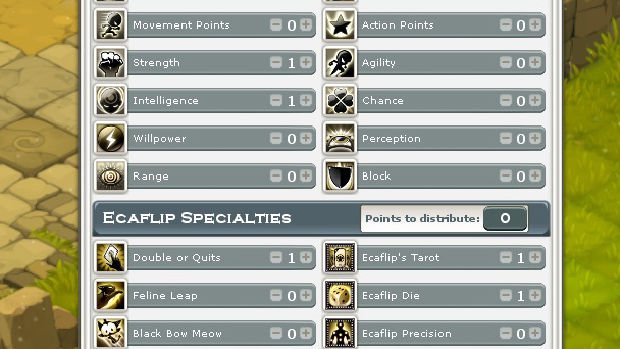 As you level up, you get five points to put into your Abilities like HP, Critical Hits, and Range, and five points to spend on your Specialties. I’ve heard complaints from a few forum-goers that, regardless of class, the only worthwhile Ability point is HP and that some dump literally every point they get into it, which is apparently completely viable. Considering that to gain one movement point takes 100 skill points and to gain one HP takes one skill point, I can see that being true. Does moving one extra square really carry the same importance as having 100 extra health points? It hardly seems so.

This is my main problem with the game; spending points often seems so insignificant. One point into Strength, which increases your Earth damage, increases it by 0.5%, so 100 points will increase it by 50%.  But again, is that better than having 100 extra HP? Even worse is that there are player skills that increase damage percentages, which work way better than spending points into Abilities. Even the Specialties are often increased by only 1% each point you dump into them, making leveling up seem like a huge grind-fest at times.

There are a lot of complaints about the balancing of specific classes on the forums, but it’s rare to come across an MMO that doesn’t have that. Although most of these complaints are likely valid, I wouldn’t expect imbalance issues to last long simply because of the nature of the genre. Overpowered classes and spells come and go as new patches are introduced. Perhaps more importantly, a huge bug has been introduced to the game: item duplicating. As I type this, I have Wakfu open in the first real area after the tutorial and there are players duplicating and giving away just about anything you can ask for. I can only hope that this is squashed immediately as it will ruin the game completely. Especially because it’s really easy to do NOT THAT I’VE DONE IT YOU CAN’T PROVE ANYTHING. 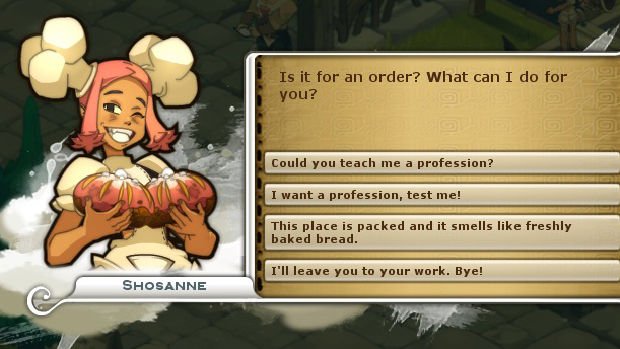 Another issue with the game is that it is often incredibly vague. The class-specific skills often have a lot going on and not everything is always clearly explained. I raised the Xelor class up to level eight and I’m still not completely sure how to use it effectively. The game doesn’t have traditional quests that you get from NPCs, but rather has a set list of achievements that act as quests. The issue here is that I’m never sure where to go or what to do for many of them. For example, the “Learn to Read” portion of an achievement apparently means that I have to get the reading emote, but how do I do that? There’s no instruction given for many of the achievements, making them difficult to attain.

When it comes down to it, Wakfu is something new and interesting all wrapped up in a beautiful package. There doesn’t seem to be any super-awesome endgame content at the moment, if the forums are anything to judge from, but in my opinion that’s not what Wakfu is about. People will play this game because they want to participate and live in its world. They want to monitor the ecosystem, run for office, or perhaps go to war against other nations.

Assuming the item-dupe bug is fixed, I recommend trying the game out if it sounds like something you’d be interested in. It definitely feels a bit grindy as you spend points that seem insignificant, but damn does the game look gorgeous enough to distract you from it!