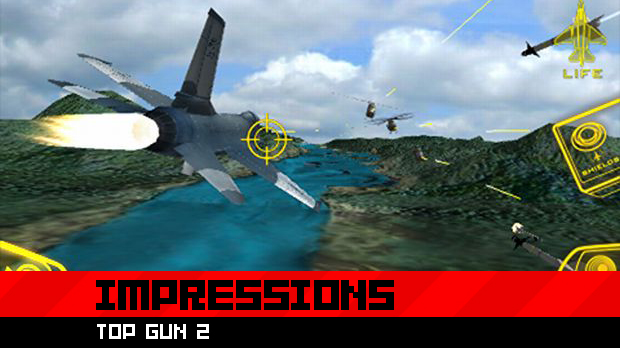 Top Gun 2 was released on iPhone and iPod Touch yesterday for those wishing to revisit that nugget of their youths when “Don’t Ask, Don’t Tell” was but a twinkle in Bill Clinton’s eye. Political agendas notwithstanding, the original Top Gun flight simulator came out a little over a year ago and Paramount has since made some notable upgrades to the game.

The storyline, however, remains the same — you’re a new recruit of the U.S. Navy Fighter Weapons School apprenticing under Maverick and Ice Man. Your mission at hand: take down enemy crafts.

The majority of new features in this version are in level design and customization options. Whereas the original version let you choose between an F-22 Raptor or a B-2 Spirit stealth bomber, you now have your choice of 3 different fighter jets: an F-14 Tomcat, F-16 Fighting Falcon, or F-18 Hornet. Each with upgradeable Vulcan cannon and Sidewinder missile systems and each capable of its own unique specialty combat attack.

You start the game off with two choices of combat: tank or jet. Defeating the boss at the end of each level opens up new modes of combat against enemy armor, fighter jets, and helicopters, and introduces new levels of terrain until you eventually run out of environments and are relegated to outer space. I’m no fighter pilot, but surely interplanetary combat is the wave of the future. Maybe.

There are seven unique environments in all and depending on how skilled you are, beating the game should take around 2-3 hours total. Not terrific for an iPhone game, but dynamic level design does give the game some replay value assuming you hate yourself enough to sit through three hours of Kenny Loggin’s “Danger Zone.”

It’s not all bad, though. The developers did intersperse the game with a few other songs written and performed by Brooklyn-based band Daredevil Squadron. It’s almost exactly what I imagine a Top Gun 2 soundtrack would sound like though I’m not really sure if that’s an insult or a compliment.

I will say this much: the graphics are undeniably great. Freeverse clearly put a lot of time and effort into making the game visually appealing. However, one important aspect I did feel was missing was the option to invert controls. Like the first version, this game is on-rails so you only need maneuver your aircraft with the accelerometer. Meaning if you’re accustomed to playing games with an inverted mouse, then steering may take some getting used to. Apart from that, it’s basically your average flight simulator game — nothing particularly innovative here, just good old-fashioned fighting for freedom.

Top Gun 2 was released on August 19 and will be available for $2.99 until August 23, after which it will cost $3.99, which I guess is reasonable if you were planning on buying “Danger Zone” on iTunes anyway. If you bought and loved the original Top Gun, then this could be worth the investment, if only for the enhanced graphics.