Only a few weeks after we first heard about Terraria, it was released on Steam. And by that I mean one day, it just appeared on the digital distribution service out of the blue — and then proceeded to skyrocket straight on to the top sellers list. It’s still there today.

Word spreads fast. Especially if you’re a budget-priced independent game, it would seem; Arrowhead Game Studios’ own Magicka had a similarly successful launch.

Maybe in this case, the strong sales were a result of the comparisons to Minecraft. That’s certainly one way to describe Terraria — as Minecraft in 2D — but there’s so much more to it. Many of you have been calling for a review. I’m not ready to do one yet, but let me tell you about this bizarre game anyway.

Without launching into a debate on this silly topic again, if such a conversation is even avoidable, Terraria does contain elements found in Minecraft and the games to come before it. Why? Because they work well. Similar to how Doom worked well, and we got a market full of ensuing first-person shooters.

More specifically, you are thrown into a randomly generated world. One of your first tasks will be to chop down trees, build yourself shelter from monsters, and begin picking away at the ground to collect minerals. Stop me if this sounds at all familiar to you — it should. In the early stages of Terraria, I wouldn’t blame you for making the such comparisons.

After a while, you start to notice a departure. Whereas Minecraft is primarily about creating and exploring, Terraria is a marriage of fighting and exploration. I’ve noticed the new trend among players is to push it as a sandbox-style Metroidvania. That I can agree with.

Let me Google that for you

It’s a strangely familiar experience starting out, especially in the way that Terraria doesn’t do a whole lot of explaining up front. There is a non-playable guide character, who has hundreds of bullet-point tips, roaming the world. But he’s not ideal. Too much information for new players.

In the early stages, you’ll do a lot of experimentation. And, when all else fails, there’s always the Internet. Thankfully, there is plenty of documentation to be found. Also thankfully, Terraria lets you craft so long as you have the necessary items to craft something — anything. No blueprints are explicitly needed.

Since you have such a large inventory, you’re allowed to screw around and keep whatever you collect, then return home to see what the game lets you build. I really dig this about Terraria. What’s more, your main items like the pickaxe, hammer, sword, etc. do not degrade. And torches are absurdly easy to cobble together. Thank eff for that.

Speaking of unbreakable items, you will be needing some of those! You’ll encounter slimes throughout the day, and zombies — among other things — during the evening hours. The creatures of Terraria are plentiful, and rest assured, they will follow you to the ends of the world if need be.

The abundance of foes is one of the things I don’t think people realize about this game. Fighting is in, creating massive structures is (mostly) out. Without giving too much away — and there’s plenty to give away, let me tell you — you can even summon boss monsters. Yeah, it goes to that level of combat. There’s also this unrelated event called the Blood Moon, which is as frightening as it sounds.

I’m glad Terraria is fairly simple looking, because it allowed the developers to cram a bunch of content into the game. One item allows you to double jump; another is akin to Samus’ Speed Booster. I’m happy to report that a grappling hook even made the cut. And guns. Terraria has guns, guys. Guns, and lightsabers, and quite a ton of other unusual items. This stockpile of goods looks overwhelming in screenshots and video, but you build up to that point slowly, and naturally.

There is a good amount of incentive to go exploring, which is key for this type of game. Falling stars are one game mechanic I really like. They strike the ground at night, giving you a reason to run around with the undead; collecting ten of ’em allows you to permanently improve your mana reserve. Similarly, but underground, there are hidden hearts for you to discover which increase your overall health. 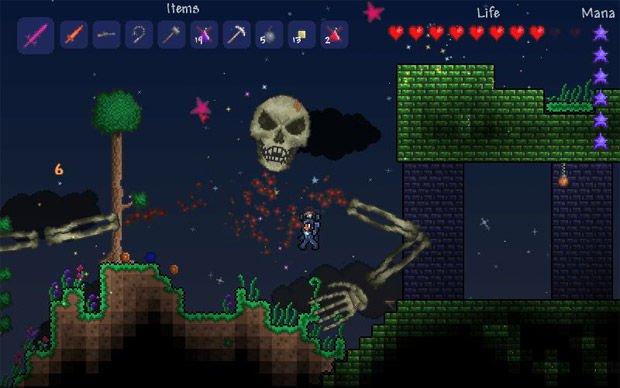 It’s dangerous to go alone, so take some friends

A common theme for exploration games is that of soul-crushing loneliness; not here. Beyond the guide character, there are other NPCs to encounter. Curiously, certain conditions must be met first. You have to actually build homes before they’ll visit your world, for starters. (No one said they couldn’t be shitty homes, though.) Expect a nurse, merchant, and dryad to eventually stop by.

I haven’t gotten much into the multiplayer yet, but since it’s more or less just an extension of what there is to do in single-player — spelunking through treacherous cave systems for loot — I’m sure it’s awesome as well. Getting my ass kicked the way I did by some of the larger enemies, it seems like teams could be a must during certain encounters.

You need to give Terraria a chance. It’s affordable, unpredictable, full of depth, and most promising of all, the game is still growing through free updates.

Forget what some comment on a blog told you about this game, and try it for yourself. Terraria is many things, and there’s something to be enjoyed by all. Oh, and if you’re only reading this paragraph because the word “Minecraft” grabbed your attention and you were also attracted to “TL;DR,” know that these two titles are rewarding in entirely different ways.

More than enough room for both. Now go read the rest of this post, you skimmer.