It’s tough to make an MMORPG worthy of note these days. People are always looking for a departure from World of Warcraft, which still towers over any other game in the genre in terms of player base. Star Wars: The Old Republic stole some of those players for a limited amount of time, but even that seems to have died down by now.

TERA has stepped on to the scene, and unlike most MMOs, it comes touting its combat system. Most MMOs simply use hotkeys and locked-on targets for combat. TERA eschews these ideas for a more action-oriented approach. The combat ends up working very well and being the bright spot of the game, but unfortunately everything surrounding it falls very flat. 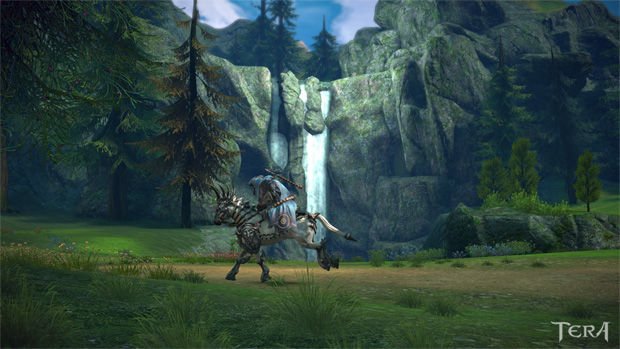 If someone were to ask me “Hey, what’s the story behind TERA?” I would reply “I have absolutely no idea.” There’s definitely a plot here, I think, but it’s poorly presented and makes no meaningful connection to the player. There’s occasionally a voiced cut scene detailing a quest, but outside of that, all lore is presented in quest details that you’ll inevitably click through without reading.

I wanted to learn more about this world. The races are diverse and interesting, and I anticipated learning more about each one. There is a series of real-life books out there, which may or may not divulge some of these details, but if those details are in the game then they are lost on me.

The opening cut scene set up a world in which all races are harmonious with each other, working together to understand and defeat a new emergent threat. It’s a shame that the game itself fails to follow up on this in any sort of compelling way. 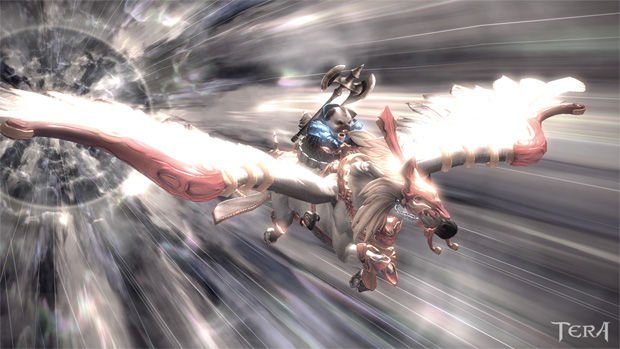 Perhaps the story would be better understood if the quest design wasn’t absolutely dreadful. Right from the get-go, TERA says to “Kill X amount of Y enemies,” and never stops. It gets to the point where it becomes hard — if not impossible — to care why you’re taking these quests since they’re all the same, mundane activities. When my character level was around the late teens, I started to wonder if there was any inspiration at all in this game beyond the combat.

They game will even show exactly where to go to kill a specific unit or click on a certain item, removing any sense of exploration. It just feels like going through the motions. Take a look at this screenshot. I have so many “Kill X of Y” quests that they’re literally going off the screen.

I kept hearing that things got better around level 20, though it wasn’t until level 23 that quests finally began to change. There are monsters called “Big Ass Monsters,” or BAMs, requiring teamwork to take down properly. The game starts flooding you with quests surrounding these monsters, but the mundane quests never quite go away.

Even though taking down BAMs can be entertaining, it’s hardly worth it to slog through almost 25 levels before getting to something that’s even remotely interesting. As someone who loves making alternate characters, the idea of going through those first 20 levels just to get to the “good part” is nauseating. Each time you’re sent to a new area, this is likely what you’ll encounter: a slew of new NPCs who want you to talk to someone or kill seven Sporewalkers. 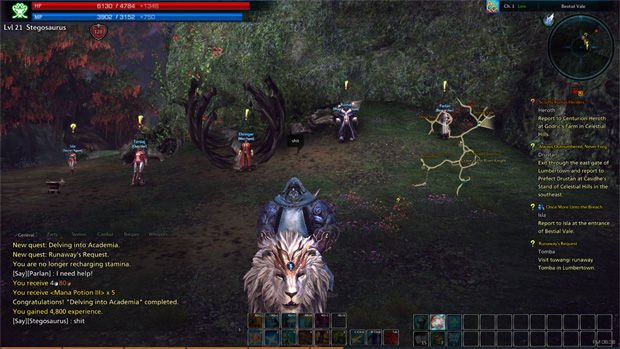 Thankfully, the combat is great. In fact, the combat is the only saving grace in TERA. Instead of locking onto targets and pushing three or four hotkeys ad nauseum, TERA has a more action-based combat system. Clicking the left mouse button will use the class’s default attack and if there’s nothing in front of you, it will simply miss. There are no dice rolls here, only hitboxes and hurtboxes. It feels really good to know that when you miss, it was your fault.

Most moves will have the ability to combo into another move, adding a certain ebb and flow to the combat. A button prompt will come up and make it easier to execute the next attack in the chain, so there’s no need to memorize combo orders. Most of this hardly matters early on, but once boss fights and team play come into the mix, the combat really starts to shine.

Each of the classes has a distinct style to their attacks, making them feel unique. Most classes seem to get some sort of movement power early on, like a short teleport, a roll, or a backwards flip. These really seem to add a nice sense of movement and controlled chaos to some of the bigger fights. The combat definitely delivers on its promise of a more engaging combat system in an MMO. 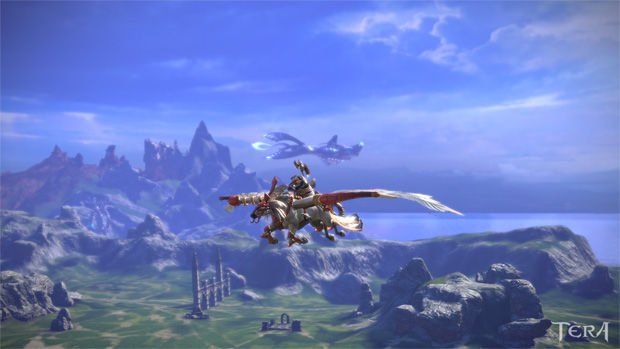 Leveling up is similar to Star Wars: The Old Republic, in that skills are bought as your character levels up. While buying skills at each level is incredibly linear, once you hit level 20, you unlock the Glyph system, allowing for more customization. In essence, this system allows you to specialize in skills that you favor more often.

Buying specific Glyphs will affect your skills, but there can only be so many active at a time. Some Glyphs will affect the cooldown, while others may affect the power or another attribute of the skill. Each Glyph has a certain amount of points associated with it, and there’s a max amount of points each character can have at a time, which goes up as your character levels up.

This adds a great amount of customization, and starting it at level 20 feels like the perfect time — you’ve gotten used to not only how your class plays, but how you like to play them. 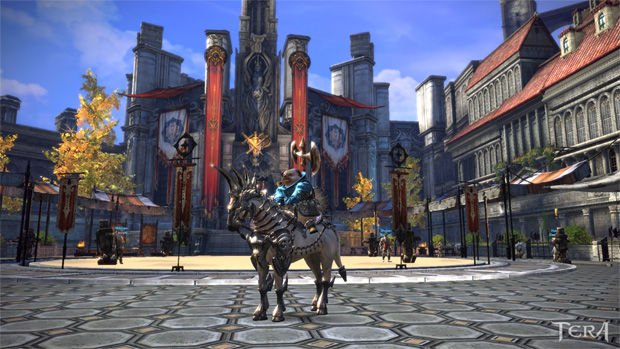 When it comes down to it, TERA will likely only satisfy veteran MMO players who don’t mind seeing the same uninspired quest design we’ve seen for a decade.

If the thought of killing enough wild deer and picking up 10 of their horns sounds like a bore, then stay clear of TERA. It isn’t worth it to have to play through over 20 levels of poorly done quests in order to get to “the good parts.” But hey, at least the game looks good, right?

The combat is great, but it’s not quite great enough to carry all of the game’s faults on its back. This game feels like it should be a free-to-play title, largely because of the “grindy” nature of the quests. If a developer can take TERA’s combat system and implement it in a game that can successfully get me invested in the world and have quests that are actually interesting, I’ll be on board.

Until then, I think I’ll reinstall City of Heroes.