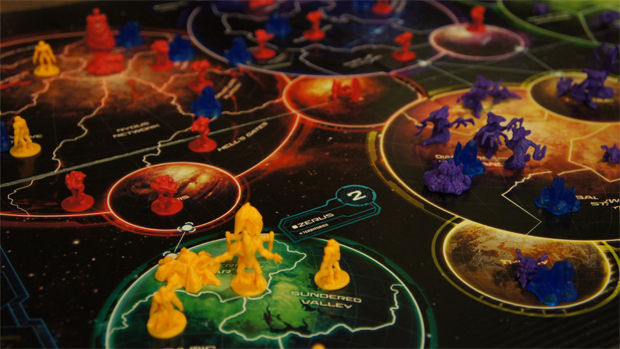 It’s Risk, but with StarCraft pieces

[Destructoid is considering adding board games (videogame-themed or not) to what we cover. Think it’s a good idea? Want us to stick to videogames only? Let us know in the comments.]

Themed variants of popular games like Monopoly and Risk have existed for a while, covering everything from cereal box characters to Nintendo. Blizzard’s dabbled in this arena before, having recently released World of Wacraft Monopoly, and now they’ve followed it up with StarCraft Collector’s Edition Risk.

Grognards who hate the entire concept of Risk won’t find much here, but those who don’t take issue with Risk‘s central premise and enjoy the StarCraft property should have fun with the game.

As with most versions of Risk, StarCraft Collector’s Edition Risk allows for up to six players. All three StarCraft races are represented, with each race having two factions. On the Terran side, you can play as Jim Raynor or Mengsk. Protoss players can choose from Zeratul and Artanis, and the Zerg can select either Kerrigan or Zagara. Each race obviously has its own figures, made of a somewhat flimsy yet durable plastic. The map should also be familiar as well — while it’s skinned with StarCraft planets and locations, it’s essentially the standard world Risk map, just flipped horizontally.

The option to play the long, standard Risk game mode with no rule changes or variations is, of course, available, and if you choose to do so different pieces and a flipped map will be all that StarCraft Risk really gives you. If you pick up this game, however, you’ll likely want to play the special mode designed specifically for StarCraft Risk: Command Room.

Many of the recent Risk variants have included game modes aimed towards shorter, tighter, games, and StarCraft Risk is no exception. Command Room still follows the basic rules of Risk, but includes a number of changes designed to make the game move faster.

Setup generally follows standard rules, with the addition of bases and mineral fields. Bases serve as your headquarters, providing you with an extra unit per turn for each base you control. Mineral fields are randomly placed across territories at the game’s start, and each territory you control with a mineral field counts as an extra point when calculating how many troops you get to place at the start of your turn.

While wiping your opponents off the map is still an option, games of Command Room are generally won by completing achievements. When the game starts, eight achievements out of a total pool of twelve are randomly drawn and laid out on the board. Some are control achievements, and require you to control an entire planet at the end of your turn. Others reward aggression, including things like controlling a certain number of opponent’s bases, or taking over a certain number of mineral fields in a single turn. You can only earn a maximum of one achievement per turn (unless you eliminate a player, in which you immediately claim all of her achievements for your own), and the first to accumulate three wins.

Each achievement also has a reward token placed facedown over it, and claiming the achievement allows you to take its reward. While some only provide minor benefits, such as allowing you to reinforce twice at the end of your turn, others provide substantial benefits, giving you an extra attack or defense die for the rest of the game. The rewards definitely are not balanced, and while the game is generally short enough that this shouldn’t be a serious issue, some may be frustrated by how powerful opponents can get if they’re lucky enough to claim two of the strongest rewards.

StarCraft Risk also contains hero units; the named characters mentioned above. Your hero is represented by his or her own figure and moves with an existing squad, and while he or she doesn’t count as an actual troop, the presence of a hero allows you to add one to your highest die roll, whether on offense or defense.

Finally, each race also has its own deck of cards that they may draw from on any turn in which they conquered at least one territory, and also did not earn any achievements. Like in standard Risk, these can simply be turned in for additional units on the beginning of your turn. However, each card also has a power or ability on it which you may choose to use instead.

While many of the abilities are shared across all three decks and just have different names, each race does have a few unique abilities in keeping with the general theme of StarCraft. The Terran card “Lift Off,” for example, makes them the only race that can pick up and move their base, even if it’s currently controlled by another player. Again, like with the achievement rewards, these abilities aren’t even close to being balanced, and a lucky card draw can quite literally turn the tide of an entire game.

Despite some of the noted balance issues, my game group had a good time with StarCraft Risk. With two of us being Risk fans and the other two generally not liking Risk on principle, all four were pleasantly surprised with how the game played. Games can be completed in roughly an hour, and the win conditions of Command Room require you to manage multiple fronts at once — if you try to sit back and build up a giant army to sweep the entire board, you’ll probably have lost the game before you can actually deploy it. As a result, the pace of the game is much faster, and even from the first turn players will likely be engaging in a number of fights with most of the other players on the board.

In a nutshell, StarCraft Risk is easy to learn, doesn’t take very long to complete, and increases the luck factor of the original game substantially. StarCraft Risk and its Command Room mode don’t change the fundamentals of Risk in the way Risk Legacy or Risk 2210 A.D. do, but there’s enough here to keep it from being more than just a straight-up reskinning of the base game.

While it won’t be making its way to my gaming table every single week, and serious wargamers will want to look elsewhere (but they’re almost assuredly not looking at Risk in the first place), Risk fans and casual board game players will have a good time.