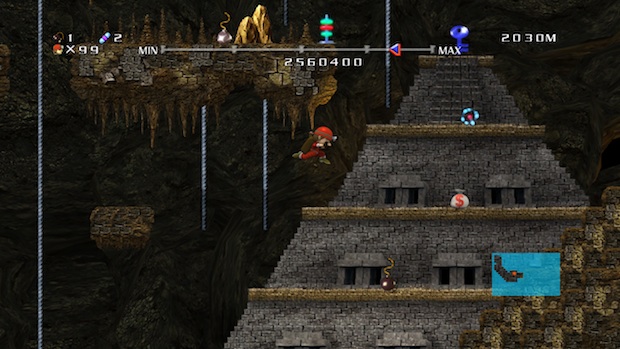 I knew Spelunker HD would be difficult, but I didn’t expect that the difficulty would keep me coming back.

It should be called Spelunker HARD. The main character is not your typical limber, high-jumping platforming star. He sucks in comparison to any of them out there. He can run and jump, but he dies from the mere touch of anything bad, even bat poop. Oh, and he can’t take a fall. Basically, falling any farther than the maximum height of his pitiful vertical jump will kill him. Hell, even some of his own items can manage to bite him in the ass.

I know what you’re thinking. How can this be fun? 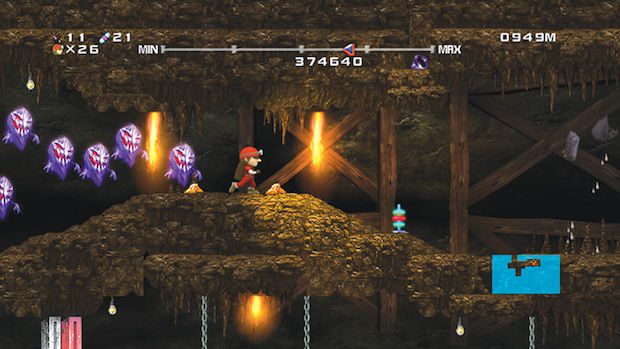 Spelunker HD manages to be fun by some force that I have yet to understand. It keeps me coming back, death after death. I’d bet my bottom dollar that first time players will die on the first jump. Yes, you can die on your very first action. And while it’s not hard to imagine most people being fine with restarting after that first jump, I don’t fully understand why I continue to…continue several deaths in. It will be a very long time before I finish this game.

The challenge of this game is high. You have to jump carefully and avoid both natural obstacles and enemies to proceed further down into the mines. The game continually keeps track of how far you’ve progressed in meters, and it also happily tracks the number of deaths you’ve piled up in your efforts. These obstacles are of the standard platform variety: fire pillars shooting up or down, bats flying overhead, and snakes slithering across the floor. Add to that the trick traps, like crumbling floors or massive boulders that follow you downhill, Indiana Jones style, and you have a game that requires you to remember where all the obstacles are and how they play out. Forget just one trap or enemy and you’ll die, forcing you to start all over. 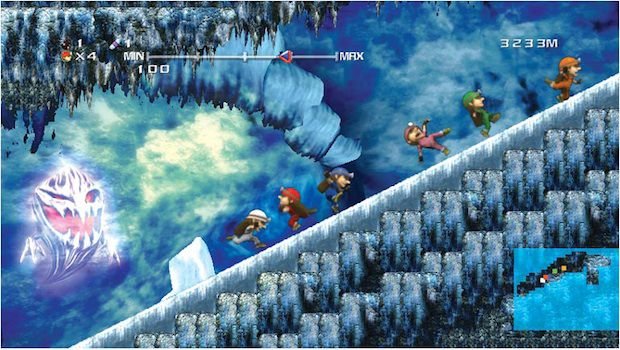 Just like in any good platfomer, Spelunker HD has you looking for keys to open doors that lead you to more areas to die in explore. The deeper you get, the more valuable the treasures are. Of course, the difficulty also increases. You do have a few tools as your disposal to help you progress. A fan will blow away ghosts that come floating by. Flares can be shot upwards to scare off bats, but if they fall back on you you’ll die. That’s always fun when it happens. Explosives let you clear blocked pathways and find hidden treasures, like gems.

So what makes it so hard? It’s all of these elements coming together all at once. Imagine hanging off a rope, working to scale it to the perfect height so that you won’t die when you jump off it and onto some rocks. On the left, on that platform, is a bat that is flying overhead. You can’t do anything about it yet as your hands are firmly gripping the rope. If you get off, the bat can poop on you. Yes, poop also kills. From the right comes a massive, screen-filling ghost. One touch and you’re dead. You could hop off on the left, shoot up a flare to move the bat, and then turn around to blast the ghost with your fan to blow it away. Oh, and did I mention that using your fan uses up your finite underground air supply that was already ticking away? 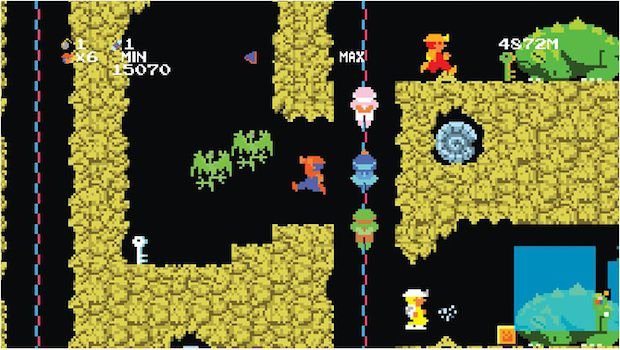 Here’s what I did in this scenario: With sweaty palms I hopped off the rope on the platform successfully. I immediately shot up a flare to move the bat, and then ran to the left a bit so that the flare wouldn’t fall on me. With a bit of time left with that flare clearance, I faced right and shot my fan at the ghost, clearing him away. With the coast clear on the left, I proceeded on only to fall into a trap hole in the ground. I died. Again.

The whole die, remember how you died, come back and try again thing really works in Spelunker HD. I’ve become addicted to dying! I must have died a couple dozen times before I even cleared the first stage. Again, it’s not as frustrating as it sounds. I usually laugh out loud when I die. As the game progresses it’s fun to see how evil the level designs become. I’ve yelled “seriously?!” at my television more than once playing this game.

This remake did really well in Japan, earning a PlayStation Network Top Sales award last year. It’s great for retro fans, as it has the option of playing with the original 8-bit graphics and sound, but it’s something that new audiences should also check out. This update adds HD graphics, 6-player online co-op, online competitive modes, and leaderboards that show your crap progress to the world. For me, it’s been a long time since I’ve played a good ‘controller thrower.’ This one ranks up there with the best of them.

Spelunker HD is available now on the PlayStation Network for $9.99.