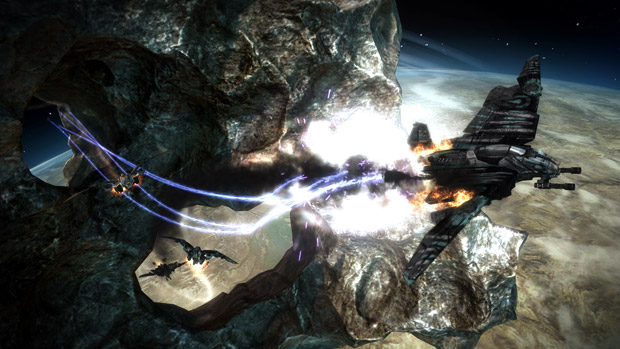 What could be better than jumping into a giant mech, blowing up some buildings, then transforming into a jet and reigning death down on your enemies from the sky? How about doing all of that in space!

Lightbox unveiled the long-awaited space combat in Starhawk for the first time at gamescom in Cologne. If you were expecting it to be Warhawk in space, you wouldn’t be far off. 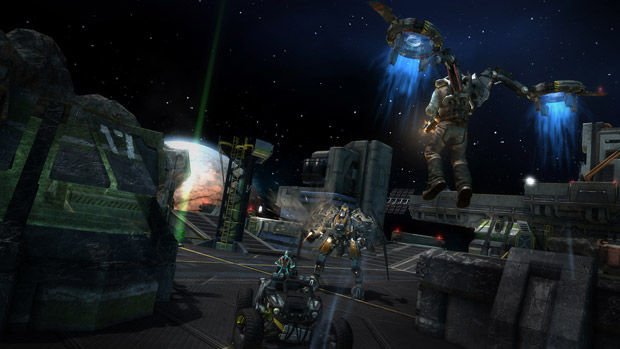 A massive space station orbits high above a planet’s surface. It is broken up into multiple disconnected platforms, floating in a sea of giant, spinning asteroids. The platforms do have a few structures on them but they consist mostly of large flat areas, allowing plenty of room for players to guide the flow of battle.

Gravity generators on the platforms mean that movement and constructing buildings works in the exact same way as on surface. However, should you fall off the platform then you can enjoy burning to death as you plummet into the planet’s atmosphere.

Hawks will be more important than ever as flying is the only way to navigate from one platform to another. So expect to see lots of intense dogfighting between the platforms, as teams battle over strategic control. However, Hawks aren’t the only way to fly in Starhawk. Lightbox unveiled that jetpacks are making a welcome return from Warhawk, only this time they won’t be relegated to DLC. 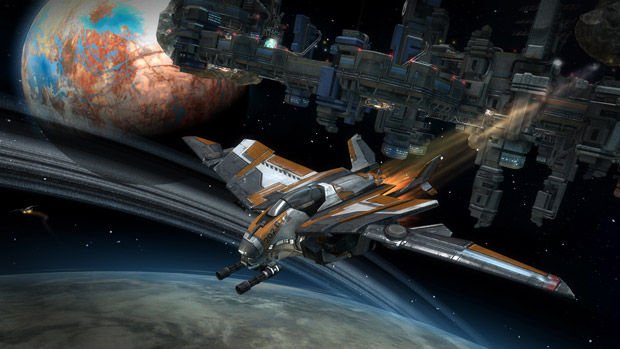 Space combat honestly didn’t seem to play too differently from the surface combat. You still drop down buildings, fight on large areas of “terrain,” and fly in Hawks. In a nutshell, space combat in Starhawk is more akin to playing Starhawk on the surface, if that surface consisted of multiple islands to fight and build on.

That said, it still looks like a blast to play and I’m sure most players will enjoy the different challenges that battling over the fragmented space station maps present. Despite not being vastly different than the combat on the surface, space combat will probably provide the variety players can use when they play Starhawk for hours on end, as they did with Warhawk.