In the first three issues of Archie Comic’s Sonic the Hedgehog and Mega Man crossover miniseries, “Worlds Collide,” Drs. Eggman and Wily met and became the best of evil bros, they constructed the Roboticized Masters using their combined technologies, and they sent their blue nemeses hurtling towards one another on a crash course of mistaken identity. The pieces were set for a grand, dimension-hopping adventure.

The next three chapters — Parts Four (Mega Man #25), Five (Sonic Universe #52), and Six (Sonic the Hedgehog #249) — find our heroes reconciling their differences and stepping into the bizarre dimensional nexus known as the Skull Egg Zone. Whereas the mustachioed docs stole the show previously, Sonic and Mega Man reclaim the spotlight here, playing their disparate character traits off one another and becoming good friends themselves.

With a change in scenery — and a rather awkward change in art style — the action ramps up going into the second act. 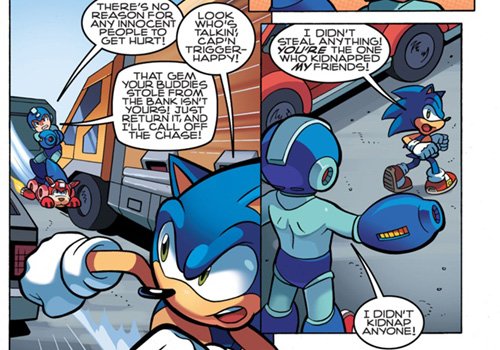 Part Four concludes “Kindred Spirits,” the first of three acts that encompass the entire “Worlds Collide” saga. When we last left off, Mega Man had successfully transported Sonic to his home of Mega City to begin the next phase of their battle. Though Sonic had managed to gain the upper hand back in Green Hill Zone, Mega is able to turn the tide with the assistance of his support units Rush, Eddie, Beat, and Tango.

The fight doesn’t last much longer as the two slowly realize that the other may not be as evil as once thought. Hoping to prevent the heroes from joining forces, Eggman and Wily order Tails Man to attack. Through their combined efforts, Sonic and Mega unknowingly exploit an anomaly in the roboticization process, reverting Tails back to his original self and equipping Mega with his first Roboticized Master weapon. Meanwhile, Metal Sonic and Bass managed to break into Light Labs and capture Dr. Light, giving Mega an even greater incentive to track down Wily and his nefarious new partner.

With the action temporarily sidelined, we finally get to see the interaction between the Blue Blur of Mobius and the Blue Bomber of Earth. Sonic’s cut-and-dry attitude clashes with Mega’s more cautious personality; sure enough, while Mega is distraught that he almost killed a living creature in violation of his code, Sonic is quick to forgive and forget as though nothing happened.

Before long, Tails manages to open up a warp to their attackers’ point of origin, thus Sonic, Tails, Mega Man, Proto Man, and Rush step through and catch their first glimpse of the Skull Egg Zone. 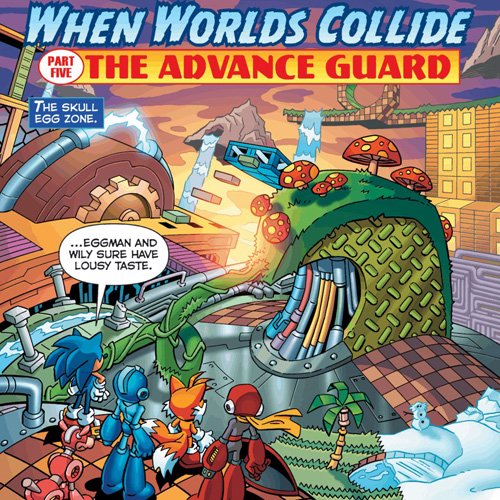 The story continues in Part Five, the start of the second act, “Into the Warzone.” The first thing you’ll notice is the abrupt change to the art. Apparently, each act will have a different penciler in charge: Jamal Peppers for Act One and Tracy Yardley! for Act Two. Tracy has had extensive experience with the Sonic comics, but this is the first time he’s handled Mega Man. It shows.

Sonic and Tails look fine, but Mega and Proto have weird proportions and noodle limbs. I can’t say I’m a fan of this abstract style, but thankfully only Mega and Proto are most negatively affected by this switch. It seems as though Tracy is still getting a feel for drawing Mega Man characters, so hopefully he’ll continue to hone the designs should he ever returns to the series in the future.

On the flip side, the Skull Egg Zone looks absolutely ridiculous. It’s a chaotic mishmash of stage elements from all the classic Sonic and Mega Man games, from the corkscrews of Metropolis Zone in Sonic 2 to the honeycomb light fixtures of Top Man’s domain in Mega Man 3. If a Sonic / Mega Man videogame ever materialized, I’d want it to be as absolutely insane as this place.

Welcoming our heroes to the Skull Egg Zone is Copy Robot, Mega’s evil clone from his first outing, and the Genesis Unit, the three Mega Man: The Wily Wars Robot Masters based off of characters from Journey to the West. They are but a warm-up, because as soon as they are taken down, the eight perfected Roboticized Masters make their grand entrance. 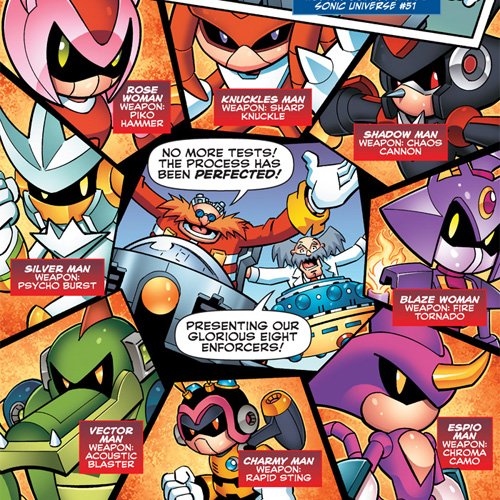 Part Three is all-out war as the Masters — with signature weapons that Mega can acquire, natch — bring the heat to our heroes. Proto decides to break from the team and head out in search of Dr. Light, hoping to draw some of the Masters’ attention away. This leaves Vector Man, Charmy Man, and Espio Man to deal with the remaining crew.

Applying the knowledge that the combination of Mega’s buster and Sonic’s spin dash can reverse the roboticization, Tails tinkers with Mega’s arm cannon to give his shots the properties of a spin dash. Sonic buys them time by taking the Chaotix on alone, all while throwing about some rather witty smack talk.

Thinking the assigned Master designations are too corny, Sonic tries to give them new nicknames, only to be interrupted before he could finish. Mega Man faithful should easily be able to fill in the blanks, though — he was going to call Charmy Man “Blast Hornet” and Espio Man “Sting Chameleon,” references to Mega Man X bosses. Vector Man, however, reminds him of a “trash collector,” a reference to the SEGA Genesis platformer Vectorman.

With his buster modified, Mega Man easily reverts the Chaotix and collects their weapons, prompting the evil doctors to draw up plans for a “ludicrously massive and over-powered vehicle of mayhem and destruction.” The final panel is of Dr. Light trapped inside one of Eggman’s prison capsule, adjacent to the capsule of Eggman’s traitorous nephew and former assistant Snively. 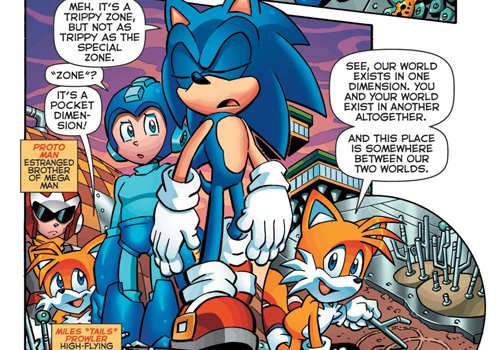 These issues finally gave us an opportunity to see how Sonic and Mega Man react to foreign elements that the other faces on a regular basis — though Sonic has had a much harder time adapting. This is typically used to humorous effect, such as when he gets nauseous after traveling via Mega’s teleport function, or when he walks nose first into one of the infamous appearing blocks as Mega looks on with twisted delight.

However, Sonic seems to be a little too inadequate next to his robotic pal. Mega continues to acquire new weapons from fallen Masters, and with the adjustments Tails made to his arm cannon, there’s even less need for Sonic’s intervention. I hope subsequent chapters better exploit Sonic’s unique abilities, because the scales are unfairly balanced at the moment.

Still, this could be seen as a necessary humbling experience for the Blue Blur. He has long regarded himself as the cock of the walk, a hero with no equal. But in the face of just such a comparable hero, one who never flaunts his own accomplishments, Sonic can’t help but crack jokes to mask his damaged self-esteem. Even Tails states aloud that it’s nice to meet a hero who “doesn’t have an ego the size of the moon.”

We have reached the halfway mark of “Worlds Collide,” and though these recent issues were a little more uneven than the first three, I’m still enjoying what I’ve read so far. I’m interested to see who takes on art duties for the third and final act, but I’m also itching to see what other terrors arise from the Eggman-Wily bromance.