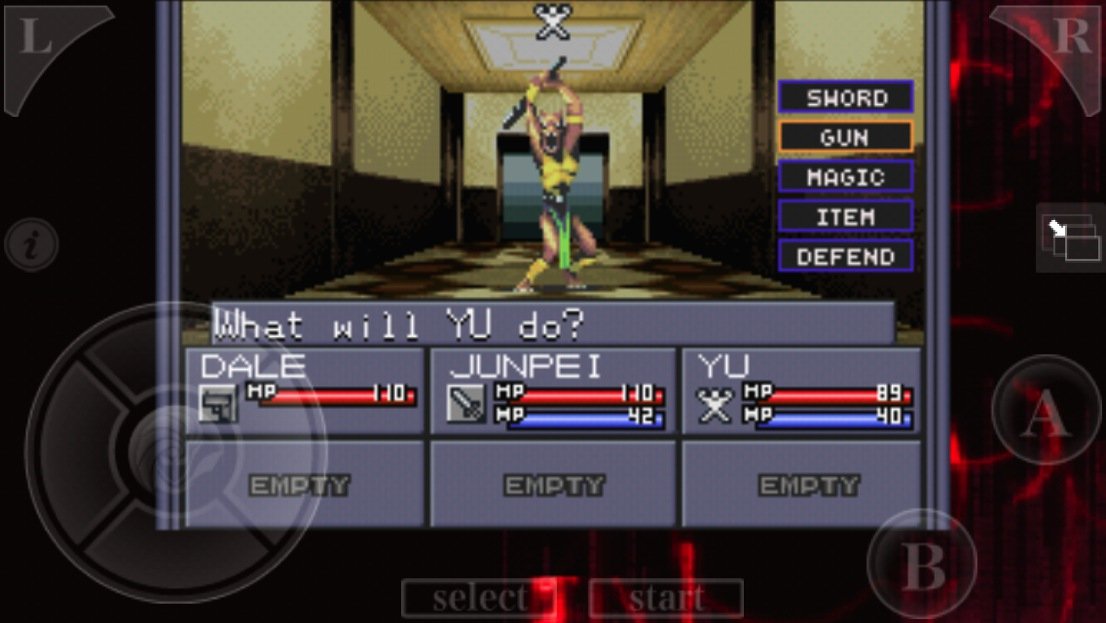 I’ve drained my iPhone’s battery a few dozen times playing Shin Megami Tensei ($5.99, iPhone, available now) these past few weeks, so I felt it was time to weigh in with my impressions on this vintage role-playing game.

I’m enough of a fan to have jumped into a Super Famicom fan translation of Shin Megami Tensei, but this official release is based on the Game Boy Advance remake, which means that it’s much smaller and less impressive. And I’ll be straight with you — it’s not impressive by any measure. It’s default portrait mode presentation has a small rectangle window of gameplay at the top third of the phone screen, with virtual buttons filling up the rest of the screen. It’s very small, the visuals are very basic, and the gameplay has a very low framerate. And I think it looks even worse when blown up for the game’s landscape mode.

While we’re on the differences between the portrait and fullscreen modes, I’ll say that I found the touch controls for the latter to be quite glitchy. The directional input seems less sensitive in this mode, and I found that it was taking me much longer to get through dungeons because of this. With the high random encounter rate and the poor map system, accidentally turning the wrong way has a high chance of getting you lost or killed. Portrait mode has worked best for me.

But for as dated as it looks, this port of Shin Megami Tensei still manages to impress in other ways. The dark atmosphere come across strongly, even out of that little box. From its opening to the synthy music, the game sets a tone that really draws you into its world. For me, the music alone is worth the price of entry.

All the things I love about Atlus’ titles — demons, summoning, dungeon crawling, weird stories — are all present and accounted for in SMT. And the localization is great so far. The game is a pretty lonely experience, but when dialogue comes up, it’s nice and spicy. It’s kind of weird to see cusswords in a 20 year old game, though.

At the end of the day, the dungeon crawling is enjoyable enough that I’m not concerned about this game’s age. That part still holds up fine. But you really have to like this particular style of corridor dungeon crawling, as that’s just about all you’ll see outside of the overworld city map screens. It’s just walls and doors in different colors, with the rare flat pop-up looking NPC appearing out of nowhere. Seriously — this game has more pointless rooms than Silent Hill. All these corridors start to look the same after awhile, and the terrible (and terribly small) grid-based map system does not help matters much. You will get lost. And again, these corridors are pretty lonely.

I’m not out to say that you’re not hardcore enough to like this game, and that I am. Nothing like that. I’m just trying to make clear that this is not necessarily going to speak to the guy that heard that Persona 4 was a good game. It’s not for everyone.

The demon summoning side of SMT games is fun for everyone, though. It works differently in the older titles, and requires more work. Here, an earned resource called Magnetite has to be spent to summon caught demons, and it continues to be spent as you use them in your travels, with each step taking a set cost out of your earned pool. I liked that I had to carefully consider the situation before calling upon my strongest (and most expensive) demons. Having to pay for power keeps things interesting.

For portability’s sake, I love that Shin Megami Tensei can just be minimized in my phone and restarted at any time I’m free. But I found that it munches away at battery life pretty quickly. A quit/save system helps out in a game that is pretty slim on save points.

I wish that this release had universal controller support, and that it didn’t eat battery charge. It would also be nice if the control wasn’t so glitchy in landscape mode. I suppose a 3DS or Vita version would have made this all better.

Shin Megami Tensei is not the kind of game that you’d rush out and buy on a console. But it is the kind of game that would interest series fans, and certainly is one worth playing. It’s perfect as an iOS release as it’s always in your pocket, ready for you at any time. It’s also a nice history lesson for those that came in later in the franchise timeline.

We’re not reviewing Shin Megami Tensei yet because I’d like to take my time and enjoy the game in this way, playing it at my leisure. I hope you understand.