The Rayman Legends fiasco has been interesting, to say the least. Initially, Wii U fans were extremely excited at the prospect of an exclusive Rayman game, that looked to trump the original on paper in nearly every way.

Life was good — until Ubisoft announced it on other platforms and delayed the Wii U game from a February launch date to September. What was once a Wii U exclusive launch title became a multiplaform game that was delayed nearly a year. Things got messy, and Ubisoft had to act fast — so they promised the release of a Wii U exclusive Challenge App as an apology.

Well, if this is the apology, it’s a damn good one. 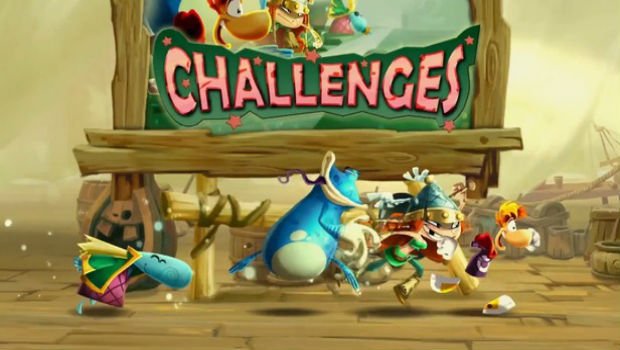 The Rayman Legends Challenge App is not a demo — it’s actually a full-on game that doesn’t utilize the “limited play” counter that Nintendo sometimes implements for trial games. In fact, the Rayman Legends demo proper is fully included in the App itself, so you can delete your old build entirely and stick with this one — without a 30 play limit.

At its core, the App has two draws: weekly and daily challenges. For either set, the game will pull randomly generated levels through a set of nine gametypes. The challenges are fairly varied in nature, ranging from endless runner parameters to “collect a certain amount of pick-ups as fast as you can.” If you dislike one of the gametypes, simply check the game every so often, and play at your leisure as it cycles them.

After playing a few of the modes, I have to say I’m pretty impressed. The core principles of Rayman‘s philosophy are upheld wonderfully here, as you punch, float, and hover your way to victory. Everything works as it should, and the simplistic, yet rewarding gameplay has a chance to shine in the Challenge App. 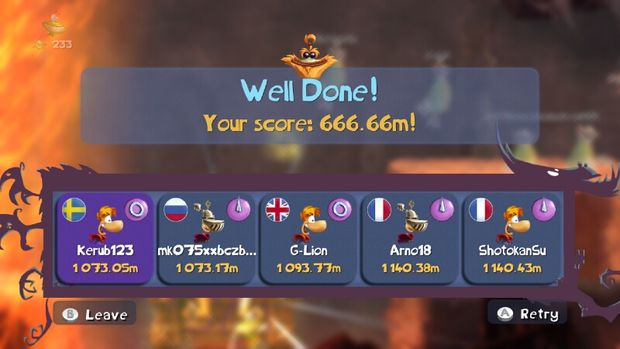 Surprisingly, the Challenge App features co-op, and for some challenges one player will control Murphy via the GamePad, with the others platforming as normal. If you’re playing the challenges by yourself, in some stages, you’ll control Murphy while a CPU automatically runs the gauntlet — in others, you’ll be in full control.

While it sounds lame that an AI is featured in some modes, it’s actually a pretty decent departure from normal platforming game conventions, as the AI is not only quite good, but playing as the GamePad can be more challenging than actually dodging obstacles. Again, the cycling in of levels helps alleviate some of the repetition of the GamePad stages. Personally, I found them to be a decent way to dice up the pacing.

The method in which Ubisoft entices players to come back to the App itself is three-fold — through offering gradual costume unlocks, challenging players to top local and worldwide leaderboards, and offering an all-encompassing “Awesomeness” score, which keeps track of all your exploits and unlocks new levels and content.

As you earn trophies through completing each challenge (and even the demo levels), you’ll start ranking up in your “Awesomeness” score, which will unlock two new sets of “extreme” challenges. It’s a clever way to keep you coming back again and again to see what the unlocks entail, as you wait patiently until the full release on September 3rd. Between this concept and the nature of some of the challenges, Rayman Legends certainly takes a few cues from both mobile game development and its own Jungle Run game, and it just works.

As I said earlier, if this is an apology to Wii U fans, I’m more than happy with waiting in exchange for the Challenge App. Although delays (especially the unusual circumstances involving Legends) are bothersome to say the least, I’ve been getting a lot more playtime from this fairly fleshed out game than I expected, and if Ubisoft truly supports it all the way up until Legend‘s release, that’s only a good thing. If you own a Wii U, make sure you pick this one up without delay.