Just in time for the PlayStation Vita’s North American launch, a trio of free games bounced onto the PlayStation Store, hoping to demonstrate the handheld’s augmented reality gameplay. You might notice that your Vita came packaged with mystical tarot cards bearing eldritch runes. Do not burn them in green fire as a sacrifice to your Gods — they have a purpose.

You’ll need those cards to play soccer, make people jump into cliffs and detonate fireworks. Surely that’s a much better hobby than all those pagan rituals of yours. 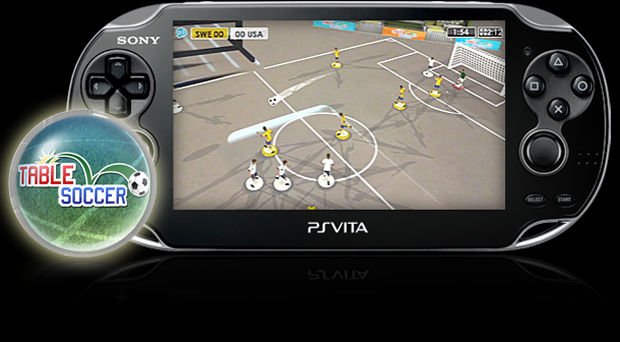 Let’s get the first game out of the way, Table Soccer. This is the most ambitious of the games on offer, and it’s also the least fun. The premise is quite interesting, as it allows you to build your own soccer field using all of the cards available. Three cards are positioned lengthways to create the pitch, a further two are required for the stands, and the final one creates a scoreboard. You can move the cards around to increase the size of your stadium, which is quite cool.

Table Soccer is, essentially, what it sounds like. It’s a table soccer game in the same vein as Subbuteo. Little toy players are scattered around the pitch, and you flick them to kick balls, move into positions, and tackle other players in a turn-based scenario. Frankly, however, I barely spent much time with it due to the controls being rubbish. Even when you zoom in, the players were far too tiny for my fat penis fingers to control. If you are Jack Skellington, you might have a better time, but make sure to wear protective gloves so that your bony hands don’t scratch the Vita!

In all seriousness, people who are really into soccer might get off on it, but it’s too much of a hassle to set up when you could just get FIFA instead. 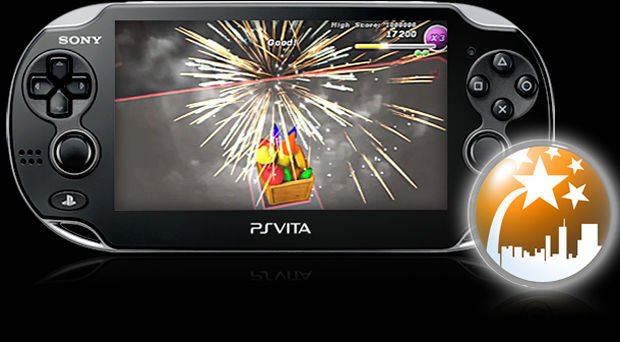 Next up, we have Fireworks. This is something of a rhythm game, although there’s no real rhythm to speak of. You set up your cards to serve as the foundation of a twee little house. Fireworks shoot from the house and your job is to tap on them so they explode in a shower of pretty flames. Fireworks can be detonated as soon as a target appears on them, but timing the detonation until the target’s curved lines are joined in a circle is the key to achieving perfect scores.

Fireworks looks quite nice, and having a miniature firework display on your desk is cool. However, the game’s biggest challenge comes from seeing how long you can keep playing until the four-note background tune drives you absolutely insane. The monotonous music — though I use the term “music” loosely — is enough to turn a sane man mad and a mad man sane, but if you are possessed of a steel will, then the actual gameplay provides some simplistic amusement that shows off the AR features in a clean, solid manner. 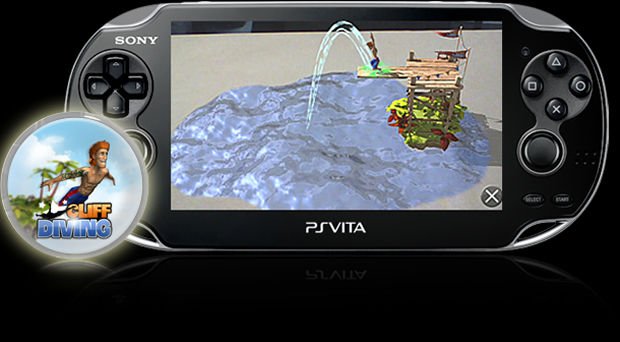 The standout game is Cliff Diver, despite how bland and unexciting its name is. Cliff Diver uses a card to erect a diving board and pool of water, and requires your timed button presses to make Diver Dan perform perfect jumps. It’s a little more involved than the other games, but it is far from complicated.

First, you have to tap the rear touchpad in time with a beeping heart monitor so that our half-naked hero can build enough adrenaline and make his jump. You’ll then have to wait until he reaches the optimum point on the diving board (indicated by a marker that flashes green at the right moment) and hold the X button. The longer you hold down X, the further Dan will dive. As he falls toward the water, he’ll pass through several hoops, and you’ll need to press one of the face buttons (shown on screen) as the hoops turn green in order to increase his score.

It’s pretty simple, but there’s enough variety in terms of diving boards and hoop patterns to make for quite a neat little distraction. If you’re going to test any of the AR games out, I fully recommend Cliff Diver as the first download. It’s barely much of a game, but it does a decent job as an entertaining little tech demo.

Besides which, they are all free, so don’t expect too much and you might end up having a little more fun than you bargained for.