Kat, Emmett, and the Fearless stage

PlayStation All-Stars Battle Royale struggles to remain relevant amidst today’s extremely competitive fighting game market. Although one can’t say the game has been a failure by any means of the word, it isn’t the breakout success Sony wanted it to be.

It’s a shame, because I actually really like the game, and still play it to this day. Let’s see if Sony can rejuvenate PlayStation All-Stars with two new characters and a new arena.

I’ve said it before and I’ll say it again — Kat is one of my favorite characters, female or otherwise, of all time. She not only exhibits strength, but she’s also one of the most charming and admirable characters to grace gaming in some time.

I’m pleased to say that her personality, and her playstyle translate perfectly here. Kat’s wavy, floaty motions, and kick-burst kicks are flawlessly executed, to the point where it feels like I’m playing a 2D Gravity Rush.

Although she doesn’t have a double jump, her Gravity Dash ability allows her to cancel mid-air and run circles around your enemies. Dusty, her trusty cat, follows her around constantly, adding to her charm.

I was able to pick up and play Kat within minutes, and her wide variety of options makes her extremely fun to play. With the Triangle button, Kat can easily escape supers with a quick air dash, or close the gap if needed.

Her powers are mainly executed by way of the Circle button, which involve powered up air dashes and flinging objects like rocks and chairs at foes, just like the game’s gravity well ability.

Super-wise, although her Level 3 is pretty boring, she has an extremely solid repertoire of level 1 and 2 powers — possibly some of the best in the game.

Although she may not fit everyone’s playstyle, Kat is one of my new go-to characters in PS All-Stars, and a solid addition to the team as one of Sony’s new mascots.

I was not expecting great things for Emmett Graves, a character from a game I mostly dismissed after a few hours of play.

Boy was I wrong.

Emmett is amazingly fun to play, as his gimmick has limitless potential for fun during matches. Utilizing the “Build & Battle system” from Starhawk, Emmett can call out multiple weapon and structure drops through the use of the Circle button. He can rain down two extra weapon drops, a super energy generator, and a turret.

The really cool thing about the weapon drops is that they stay on the battlefield, allowing you to switch gear on the go and change up your strategy at will. It’s tons of fun, and almost feels like a game within a game, deciding where to place your arsenal.

Through the use of all four of these drops, Emmett forces other players to adapt to him. Players who are prone to turtling can drop back, call down a generator, call down a turret to protect him, and grab some energy while everyone else fights it out.

Super-wise, Emmett isn’t all that formidable. While his level 1 and 2 powers adapt to whatever weapon he has on hand (a nice touch), they’re a little too similar to Radec, and can easily be avoided. Even his level 3, which calls out a giant Hawk mobile suit, can be dodged with the right escape moves.

In terms of balance, I don’t think Emmett is one of the clear-cut best characters in the game (unlike Kat, who has potential for top-tier play) right now. But that doesn’t really matter to me, as he’s still one of the most diverse characters to ever appear in a mascot fighter period.

Kat and Emmet have their own backgrounds, costumes, icons and minions too. They really went the full mile with this DLC. 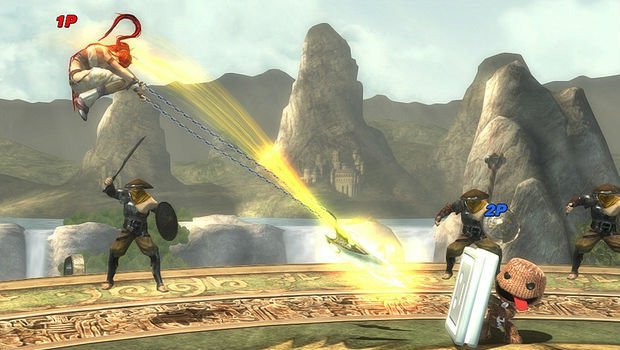 The new level, priced at $1.99, is called Fearless, and is based on a mashup of Heavenly Sword and WipEout. I won’t beat around the bush here — it’s a disappointment.

The stage starts on a giant rock in a beautiful background themed around the Fearless area of Heavenly Sword (fans will recognize it) — so far, so good. But in what feels like less than a minute, the area collapses, and you fall into a static area that’s half Heavenly Sword and half WipEout themed. Simply put, the WipEout homage is extremely disappointing.

There’s a futuristic race track on the far, far right of the map, and if you have level hazards switched on, cars will occasionally drive by on it. That’s really about it. After a quick transition, cars will sometimes hit you if you get really close to the right side of the screen. While it’s not necessarily a bad stage by any means, it’s a major disappointment.

You can easily live without buying it, because the recent update actually added it to your game, meaning you can play it online occasionally — you just can’t select it yourself and play it offline is all. 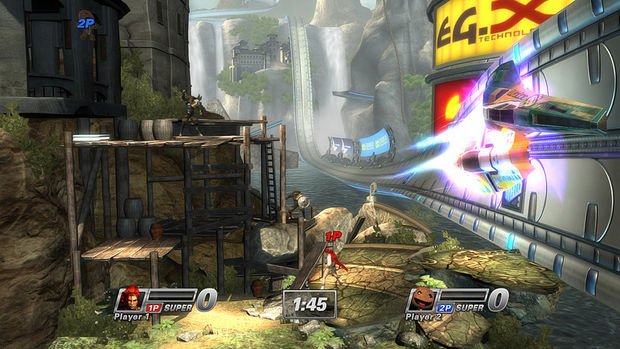 As far as the big picture goes, strictly in terms of the characters, this is DLC done right. The developers put in the effort to incorporate the new cast members into the core game seamlessly, added their own bonuses to boot, and made them freely available for a two-week period.

If Sony can keep this model up for the remainder of 2013, I’m sure more people will be talking about PlayStation All-Stars — and they should, because the core game is fantastic.