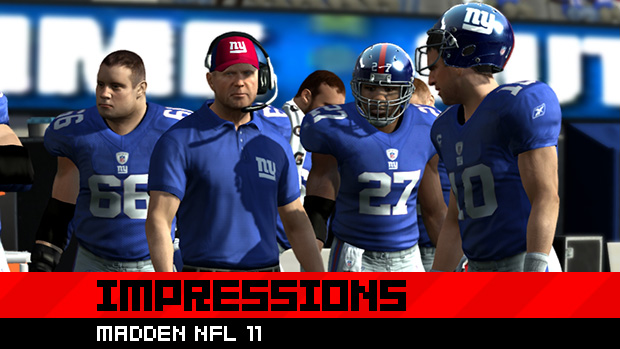 “Everything you see on Sunday, see it in Madden NFL.” That has been the mantra of the design team at EA Tiburon for the past two years, and while a TV-style presentation is great, most gamers would likely tell you that they’d prefer to see everything that happens on the field in an NFL game get replicated in Madden.

I’ve spent a few hours with a final version of Madden NFL 11 (both at an EA press event in New York three weeks ago, and at home with a boxed retail copy this past weekend), and I’m here to report on how well the game plays. Hit the jump to read about the thing I’ve never been able to do in a football videogame until now.

[Editor’s note: Look for my full review of Madden NFL 11 in one week.] 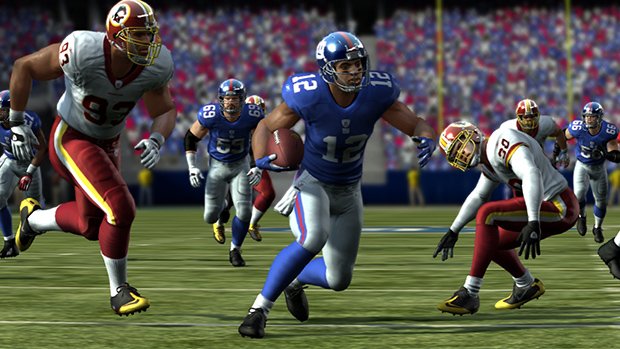 NFL fans know that pro teams run a wide variety of plays, and Madden has always been good at representing them well in its playbooks. The summer after the wildcat formation rose to prominence in the league, you could snap the ball directly to the Miami Dolphins’ Ronnie Brown in Madden. But having a play in the game only meant that you could run it; for certain classes of plays, you’d have to have been a fool to actually try to use them. Longtime Madden players are probably nodding as they’re reading this; the “don’t ever bother with this” options included draw plays, in which an offense tries to bait the defense into pushing upfield by making them think that a pass play is being run, only to hand the ball off to the running back. Unfortunately, because the blocking in Madden didn’t work properly, running a draw play was asking for a loss of yardage.

In a game of Madden NFL 11 against the Philadelphia Eagles, I broke off a 20-yard run with the New York Giants’ Brandon Jacobs — on a draw play. I had literally never gained more than five yards on a draw play in a football videogame before that moment, so the run left me ecstatic. Last year, Tiburon did a great job with pass blocking: offensive linemen actually formed a pocket around the quarterback. This time around, they’ve made a ground-breaking improvement to run blocking, and it’s evinced in the play art: you can actually see the entire blocking plan of a play, and it will change dynamically depending on defensive positioning. 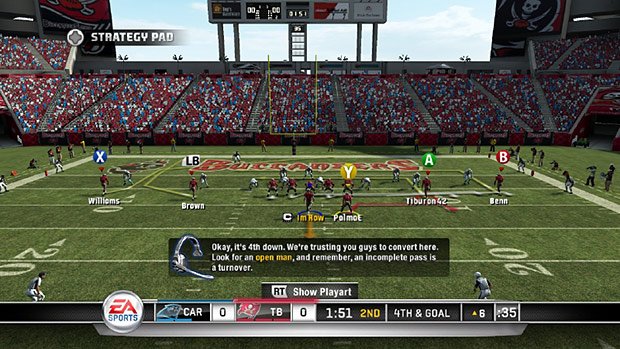 When you consider the new movement engine alongside the vastly improved blocking, the running game feels more fun than it ever has before. It also allows you to pull off feats you’ve never been able to achieve in a Madden game until now, like juking a defender out of his shoes by bouncing on your feet and then cutting in a direction. The new ball carrier controls, which allow you to perform all the moves you’ll ever need (aside from stiff-arming and hurdling) on the right analog stick, offer an unprecedented degree of control. For instance, once you’ve been hit, you can control the direction in which you fall, which will help you eke out that crucial extra yard or two.

The audio/visual presentation is top-notch this year, thanks to the addition of Gus Johnson in the booth and a variety of interstitial cut-scenes, such as shots of fans outside the stadium. (For more of my thoughts on the game’s presentation, check out my impressions of the demo.) There’s a strange hitch that occurs almost every time the game wants to show highlight replays — where it freezes for a second, as if it’s searching for and cuing up the footage — but aside from that, the game looks and sounds fantastic.

One aspect of the presentation that hasn’t been as popular, especially with longtime Madden players, is the new Strategy Pad. In the past, different button presses corresponded to different pre-snap adjustments (such as rerouting receivers or moving your linebackers). Tiburon mapped all of the options to a single location — the D-pad — and series veterans who were used to the old controls rebelled. An option to get rid of the Strategy Pad will be patched in, but frankly, I don’t have a problem with it. Sure, it takes some getting used to, but the new system isn’t any worse — and it’s more intuitive, if you think about it. 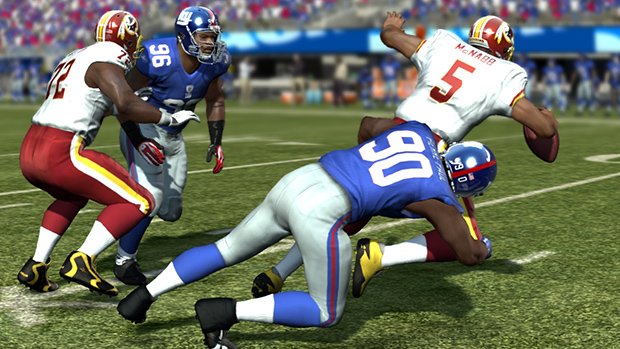 A highlight of my time with Madden NFL 11 at the EA event was playing (and watching others play) the much-improved online co-op, the Online Team Play mode. Thanks to the headsets that EA provided, we were able to coordinate like, well, a team, letting each other know that we were going to get open by heading toward the sideline, or that we were playing a shallow zone as a linebacker. If you get a group of serious Madden players together, you’re bound to make some great plays happen — and in the process, write a few great football stories.

I’ve only played Madden NFL 11 for five or six hours so far, but it’s already shaping up to be the best entry in the series yet. And I didn’t even talk about GameFlow and Gameplanning! I’m going to go back to playing the game, and I’ll have a full review for you next week.