The Darkin Blade vies for your Riot Points

I wasn’t blown away with the previous addition to League of Legends, Lissandra, but as soon as I laid eyes on Aatrox, I knew I had to take him for a spin. With a giant pulsing blade, demonic looking wings and mysterious past, the sky was the limit for Aatrox.

Yep, he plays just as cool as he looks. 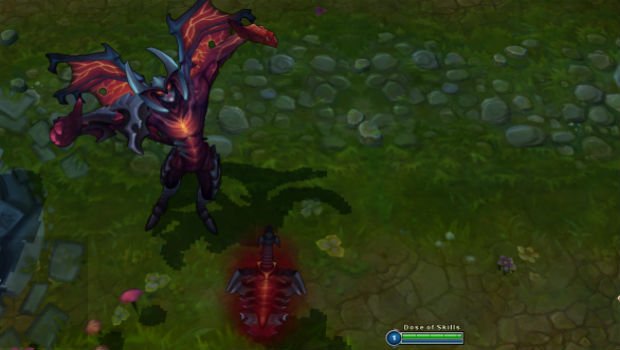 First things first — Aatrox is a melee beast with a minor escape/initiation ability, centered around leeching life and dealing extra damage at the drop of a hat. Aatrox essentially functions on a special rage meter (he needs to stay in combat to sustain it) that taps his health, so he’s perfect for early game harassment, as he hardly ever has to retreat or stop poking due to a lack of mana. His passive, Blood Well, ensures that he gains extra damage when his rage meter fills, and gives him an instant revive after death (on cooldown). In short, you play him like you’d play a Guilty Gear match — aggressively.

Of course, downtime can occur, which Aatrox takes advantage of quite well. Due to his passive life leech, Aatrox can head over to a jungle and beat on some mobs to get his health back up. Dark Flight is his his escape/initiation power, allowing him to fly up for a second and slam into the ground, enacting an AOE damage ring. You can counter this with a stun attack to help keep it from being too overpowered. It also has a quick knock-up that functions as a quick crowd control power. Due to this ability, Aatrox can be really enjoyable to play as he dashes in and out of combat constantly.

Blood Thirst/Price is easily his most fun ability, and what gives him the most depth. Just like it sounds, this toggled ability allows Aatrox to either leech or pay extra health on every third strike. Constantly changing this ability on the fly is the key to success, as you manage his health and damage output accordingly. With Blades of Torment, he can shoot a projectile in a straight line, adding a fun skillshot to his arsenal, and some ranged capabilities, which really rounds out his playstyle.

Massacre, his ultimate, instantly does AOE damage to a ring around him and grants him extra attack range and speed. Using this with Blood Thirst/Price and a quick pop-up from Dark Flight can make for some very devastating ganks. It’s not the most interesting ult in the world, but it’s incredibly useful in 5v5 teamfights near the end of the game.

As you can see, Aatrox is a great duelist, but he lacks utility outside of a knock-up. Essentially, all of his abilities are focused around dealing damage, which of course is a great thing, but without crowd control or any team buffs you may find yourself lacking in late game fights depending on your team’s composition. Alternatively, you can also carry your team in more casual games due to the fact that Aatrox is more solo oriented, and with the right team, he’s no slouch either and can serve his role extremely well.

His design is typical “fallen angel” fare. He’s a member of the very exclusive race of Darkin. A man of very few words, he appears on the battlefield when you least expect it, changes the course of a war, and quickly vanishes soon after. Think Nosferatu Zodd from the anime Berserk, but a little less interesting. I think you can probably take one look at him and see if you like him aesthetically, as what you see is really what you get here, including “riveting” dialog like “some fight for honor, some fight for glory. It matters only that you fight.” Thankfully, I’m a sucker for demonic characters, and the shoe fits here.

Aatrox is one of my favorite Champions in recent memory to hit the game. If you’re a fan of melee characters, you shouldn’t hesitate to pick up this incredibly fun addition to League, as his versatility really makes him more than just another melee character. I don’t know if I’d recommend picking up his justicar/angelic skin though, as the artwork (I’m getting Tyreal/Diablo flashbacks here) looks much cooler than the actual in-game model.

If you missed the write-up on the last League Champion, you can find it here.