The old face of the franchise returns

Double Helix’s first season of Killer Instinct is over, and here to close it all out is Fulgore, which makes eight total characters in the mix. While only two more fighters have come post-launch, they make a huge difference in terms of the meta-game, and help change things up considerably.

Spinal was a nice addition for sure, but Fulgore ups the stakes considerably. 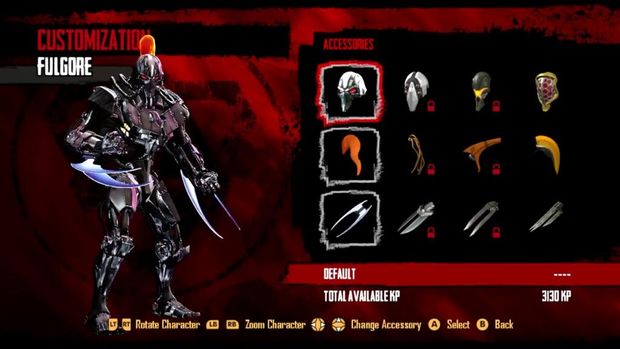 Although he’s a bit slow, it’s clear right out of the gate that Fulgore is a massive powerhouse. His signature blade dash is back (now a down-forward kick command instead of a charge move), as is his eye laser, projectile, shoryuken (plasma slice), and teleport. He’s a lot like Jago in the sense that he’s a “Shotokan” scheme that’s very easy to pick up, but difficult to master — especially in this robot’s case. Fulgore’s teleport is particularly resourceful because each command (light, medium, heavy) will transfer him to the same location every single time — in other words, it’s not relative to the opponent, so there’s no confusion in the heat of the moment.

His shadow meter runs on a charge action by way of an ability that must be used manually (down-back kick). Fulgore boosts his core like he’s going Super Saiyan. It can be extremely tough to pull off against an aggressive opponent, but it’s not too hard to pop someone up with a finisher, dash back, and boost up, even if it’s just for a few seconds. Almost all of his attacks can be modified by way of shadow — even his teleport (which adds damage)! There are 10 blocks in all, and it takes four to pull off a shadow modifier. Funnily enough a full meter boosts Fulgore’s speed a tad, so there’s an interesting risk-reward system that players can experiment with.

Where Fulgore utterly differs from the rest of the cast is his unique Devastation Beam move, which requires a maximum shadow meter and an active Instinct Mode to pull off. It’s really tough to land (and easy for your opponent to look out for), and if you attempt to mix it into a combo it will scale down considerably. All things considered it’s a wicked standalone punish, and a great option that he doesn’t even really need.

It helps that his character model is well done, and sports a heavy amount of detail down to the rocket boosts in his legs and arms when using any given move. The new look also stays true to his classic model while making his own mark on the franchise — kudos to Double Helix for pulling this off. As an added bonus, the Fulgore title update adds another arena in the rotation.

It’s far too early to see how balanced Fulgore is in the grand scheme of things (my early warning signs tell me a patch is on the way in the near future, yet Spinal seems to be a great counter-pick), but he’s a welcome addition to the cast. Not only is he absolutely essential for a Killer Instinct game as he’s one of the most recognizable fighters, but he’s a worthwhile character that you should pick up right away if you’re an active player.

Now that Double Helix is out of the picture, I hope Iron Galaxy can deliver with a possible Season 2 (Combo and Cinder, please).