Three packs in one

Halo 4 has sort of dwindled, despite the fact that I still queue up on occasion and heartily enjoy it. After three map packs that have ranged from “meh,” to “great,” the Champions Bundle came out of nowhere outside of the Season Pass, offering up three pieces of individual DLC.

Although the bundle may net hardcore fans a few extras, you’d probably be better off just buying the two new stages and calling it a day. 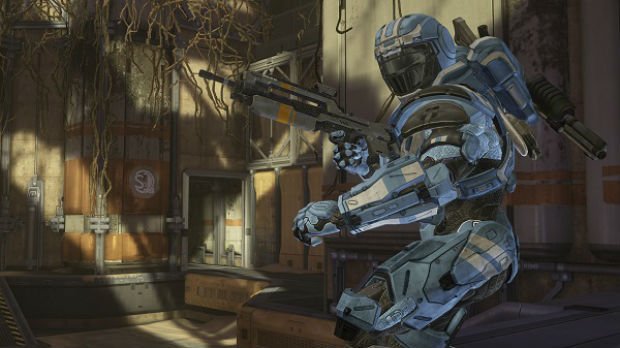 So what do you get in the bundle? Well, it’s broken down like this: the Bullseye Pack comes with two new maps and a new gametype — the Infinity Pack comes with some armor — and the Steel Skin Pack has some weapon skins.

First things first, the levels are actually pretty good. Although it’s billed as a “new” level, Pitfall is actually a remake of Halo 3‘s “The Pit.” Veterans will remember this map fondly, as it was one of the best stages on offer in the base game, and for good reason — it offers up a ton of variety. The map has long hallways, open areas, high vantage points, and essentially accommodates all types of combat.

There’s nothing really new here other than your typical upgraded visual sheen (and one gravity lift), but the layout is still as solid as a rock, and hardcore fans will appreciate it. Although it’s a bit strange to offer a two-map pack and include a remake as half of it, the fact still stands that Pitfall is a solid addition to Halo 4 matchmaking. 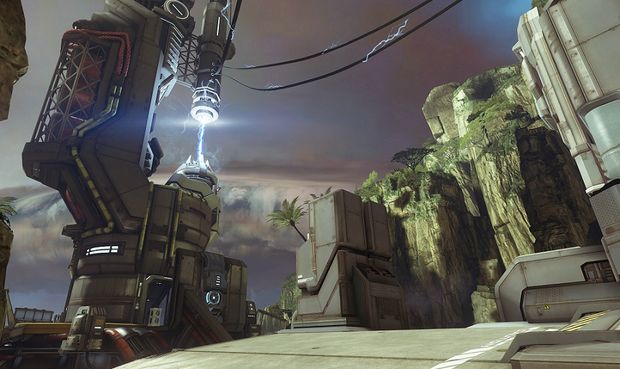 Vertigo on the other hand is a brand new map, and it’s also a very good one. It’s a small- to medium-sized map that’s rather intimate, focusing on a cliff-side retreat with two bases at the center. Interestingly enough the map actually has an environmental aspect to it, as players can shoot a trigger point on each base to overload the platform and drain enemy shields. The effect recharges every few minutes, so it’s not a one-time thing, and something you need to check on occasion.

But it also isn’t game-breaking, and won’t ruin the map for the more competitive types — which is just the way it should be. Even though I’ve never played Vertigo before testing it out this week, I felt like I have — in a good way. It’s very true to the Halo formula, yet has a new and interesting mechanic of overloading the bases.

Ricochet is the third piece of the Bullseye Pack puzzle, and it’s basically derivative of a Gravball sport that’s more like team handball or American football. Running a ball into a goal will net you more points than throwing it, encouraging riskier tactics and heated close-combat fights. Although I wasn’t crazy about it, I know some late-night sessions with friends will fall back on it from time to time, and consistent players will appreciate the variety after their hundredth consecutive Slayer match.

So how about the two other packs? Well, the Steel Skin DLC is just outright a waste of money. The weapon skins on offer (viewable here) attempt to sell themselves as a Steampunk-style add-on, but they’re so underutilized that they just feel lazy. Mostly, they’re just iron, steel, or copper-like colors, and they’re so drab that you may even pass over them entirely in the loadout menu.

The Infinity Armor Pack on the other hand (viewable here) is a pretty neat trip down nostalgia lane for big fans of Halo. For starters, it comes with the original Halo Mark V armor, as well as the ODST suit. Although the Mark V is a bit over-saturated already online (every other player uses it), it’s for good reason — it looks awesome. On top of these retro pieces of armor is the Prefect suit, a very cool piece of armor that I actually use on my character right now.

As as side note, if you buy the package altogether in the bundle you get extra bonuses, like the resistor upgrade to let you keep composure under fire, and a few new skins and avatar stances. It’s nothing major, but if you still play Halo 4 regularly, you’ll want them.

Plain and simple, if you’re a casual Halo fan who picks up the game every so often to check out the newest DLC, you’d be better off just getting the two new maps and skipping everything else. But with the sheer amount of content (albeit mostly cosmetic) that comes along with the Champion Bundle proper, Halo junkies will find a decent amount of options to last them quite a while.