After the fairly underwhelming Crimson Map Pack, which was littered with sprawling vehicle maps that not many fans asked for, the second Majestic Pack was a breath of fresh air, instead offering up a solid mix of close, tight-knit arenas that the core game severely lacked.

It seems as if a compromise was made then, as the third and final (for now) Castle Pack also has vehicles, and features fully open air environments throughout. But unlike Crimson, it consists of levels worth playing over and over, and doesn’t really go overboard with its themes. 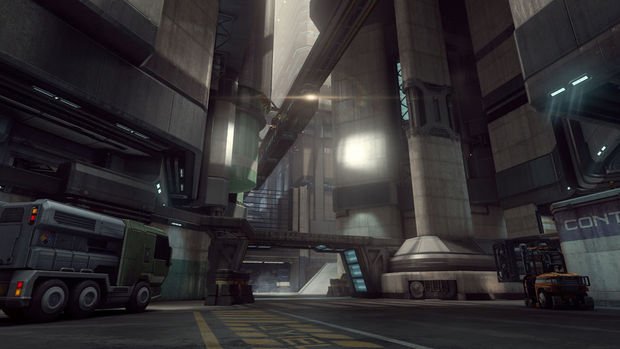 “Perdition” is my favorite of the three new maps on offer. It features an open, urban setting over the backdrop of an unstable reactor. Although the buildings look stories high, most of your firefights are going to take place on a low to medium height.

There’s a lot of cool details ranging from the reactor itself, to the air, which is littered with ships flying about. “Perdition” supports pretty much every playstyle, from close combat with the numerous indoor environments, mid-range rifle play with alleys and hills, and plenty of sniping.

It doesn’t go vehicle crazy, instead just opting to supply Warthogs and Ghosts for an enjoyable, old-school-style cityscape brawl-fest. It’s simple, extremely fun to play, and one I found myself voting for on a consistent basis. 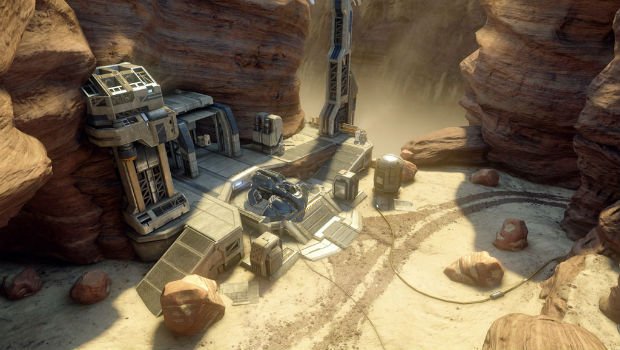 “Outcast”  is a medium-sized desert map with ground vehicles. Thematically it’s bland and inoffensive, which pretty much sums the map up as a whole. There’s some open ground but mostly it’s obscured by scattered twisted caverns (the only part I enjoyed).

This map is vehicle-heavy, and it’s even advertised as featuring “frequent Mantis vs. Wraith battles” if that’s your thing (it’s not my thing). It also has Warthogs, Mongoose drops, and Ghosts for maximum vehicle carnage. The only cool extra it has is an occasional Flying Darter ship cameo from Halo Wars.

There’s not nearly as much ingenuity in the layout or the design of “Outcast” as the other two maps, and I often times attempted to avoid it. There’s something about it that doesn’t really make it a joy to play with both objective or kill-based gametypes. Still, it’s not an unplayable map by any means 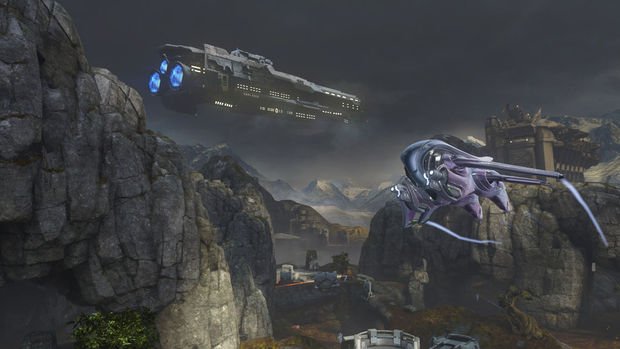 “Daybreak” is a lot like “Outcast” in that it’s a semi-hilly map on a cliff, but has a lot more personality to it. It hosts a good mix of outdoor terrain and structures — think small, Blood Gulch-style bunkers — that make objective- and slayer-based games fun.

In fact, this map thrives on objectives, as I couldn’t stop playing Extraction on it due to the massive amount of landscape variety you have to overcome — but from what I can tell, it works with any mode. The multi-tiered layout allows for plenty of sneak attacks, and can be conducive to the jetpack loadout.

I’m constantly finding myself voting for both this and “Perdition,” and it’s a welcome, yet familiar addition to Halo 4‘s stable of maps. I actually think “Daybreak” is so good that it will be the fan-favorite choice out of all nine DLC maps on offer. 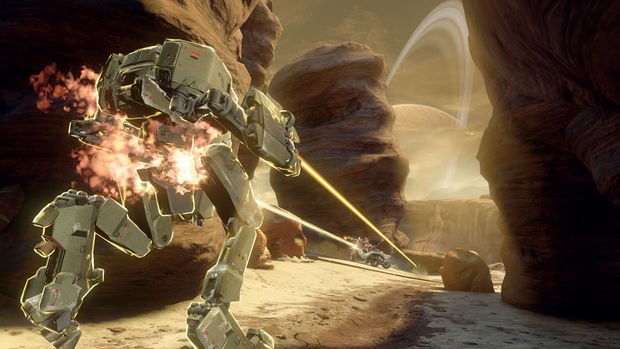 Castle is a decent compromise between the far too open and barren Crimson Map Pack, and the (ultimately superior) tight-knit Majestic DLC. It rounds out the cumulative map selection by offering up arenas that pretty much everyone can enjoy, and helps bump the Season Pass up to a solid two out of three packs, which makes it worth buying for any Halo fan.

Although these aforementioned three maps officially close out the Season Pass, as you are probably well aware, that doesn’t necessarily mean that paid DLC is done for Halo 4.