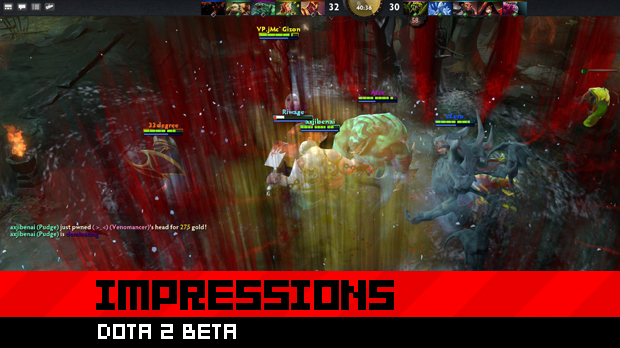 The Multiplayer Online Battle Arena genre has been fascinating to watch grow. Like many popular independent works, it started from humble beginnings with a little mod for a well-known game. I can only imagine that few could foresee just how popular the mod would get.

This appeal resulted in full retail releases of multiple games, taking the same basic gameplay and adding original spins to the formula. Some tried to refine and improve the base to be more accessible, while others went in different directions to have less-than-stellar success. A lucky few have become popular enough to find a spot within competitive gaming.

What of the original source? What of Defense of the Ancients, the mod map for Warcraft III that started the whole genre? Some still consider it the best of the bunch. For the most part though, it still remained in the realm of Warcraft mods, never seeing its own conversion to retail like Counter-Strike.

Thus, Valve shocked many when they announced Dota 2, which skips over the entire process of making a real “DOTA 1” to simply go for the sequel. The big question is, what makes this Dota 2? Is it merely Defense of the Ancients with a nice coat of paint, or is there something bringing it into a new generation of gaming? Read on to find out what I think after spending time with the ongoing beta. 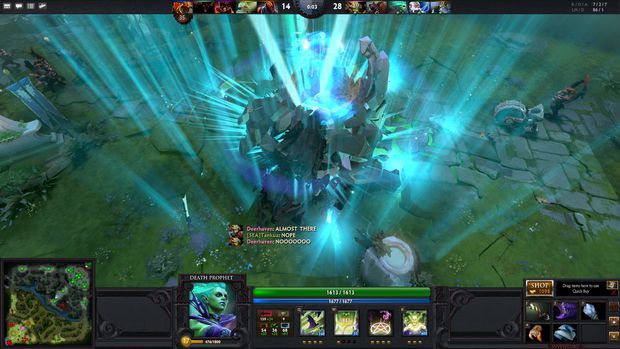 Those who follow my writing know that I’m a frequent player of League of Legends — arguably the most popular current-running MOBA game — and have covered it around the site frequently. I have never played the original DOTA though, so while not completely blind in walking into the beta for this game, I would not be able to tell you for certain what all of the aspects are maintained. From what I could tell, much was held over from the original.

The basic elements of the gameplay remain the same. There are three lanes connecting two bases on opposite corners of the map: one that curves at the top-left corner of the map, one that curves at the bottom-right corner of the map, and the third that crosses the center diagonally. Mindless and automated minions walk along these lanes, attacking the towers and enemy minions as they fight their way into the enemy base. Two teams of five players, each player controlling one hero character of their choosing, help these minions along in an attempt to skew each skirmish to their team’s favor. 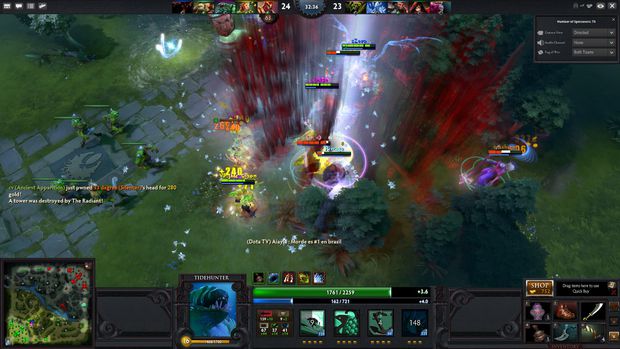 Dota 2 plays like any other MOBA. It retains the same overhead perspective, and controls much in the same way you would expect an RTS game to. It also offers some RPG flavor as your chosen hero can level up during the match, and you can allocate points into attributes and skills. Finally, there’s an obligatory shop where you can buy items to equip using gold gained from kills.

Despite so many similarities, Dota 2 still has some good things going for it. The graphical fidelity is magnificent. Valve certainly has a solid track record of making detailed-looking games that manage to have a simplicity about them, and this is no different here. There is also a matchmaking feature for automatically setting up teams of people, which works really quickly, and seems to set up fair matches.

Should there be someone who quits your team after a match has been made, a helpful rule can save you from wasting time on a loss. If five minutes have passed since said person left, then you can leave as well, and you won’t incur a penalty for doing so. Until that point, you could actually deselect your own hero and take over the one that person left behind to try an compensate for the lost player. It’s something that I’m sure could be greatly helpful for experienced players if one member of the team has a momentary lapse in their connection, or some other unfortunate circumstance. 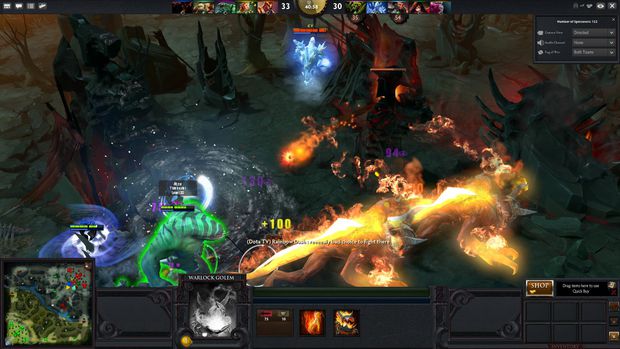 There is also a fully fleshed out Spectator Mode, in which any number of people can click on an in-progress match to watch it live as it happens. Perhaps the neatest thing about this is the inclusion of an automatic camera director, which will move your screen around to watch all the areas where the action takes place. There is also a spectator-only chat in this mode, allowing you to talk with other viewers watching alongside you. When making a private room for a game, you can disable the ability for people to watch in on you as well.

Unfortunately, there are also parts in Dota 2 that don’t feel quite so good. While the graphical quality is really nice, the general art style and the color choices feel rather bland — even borderline generic. There are a lot of dark colors, and even on the side of the map that’s supposed to be vibrant, there is drab coloring much in the same vein as first-person shooters from three to four years ago.

The character designs also don’t ring of any distinct uniqueness to them. Other MOBAs that have drawn inspiration from or pay homage to more famous icons, but here the characters all feel like they could be interchanged with anything from fantasy story-hood. This is also reflected in the lack of naming for each hero. While each character may have a name in their lore, the selection screen opts instead to name them by the closest thing to their “class.” 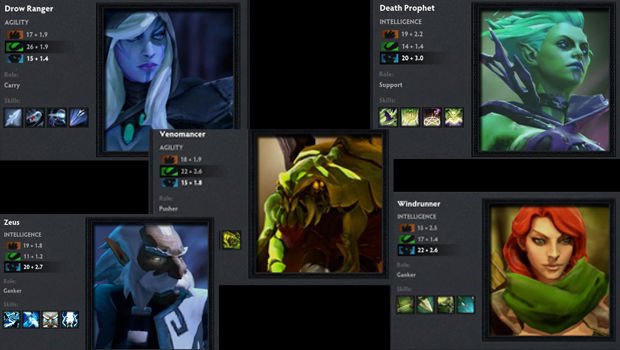 This also hurts the gameplay to some extent. Targeting specific enemies can become hard as they clump up randomly with each other in skirmishes. Targeting enemy heroes can be just as bad considering there is little that distinctly makes them stand out from the minions. Sure, there is a floating health bar that is a bit bigger than the ones over the minions, but there are still plenty of times where lots of minions and screen-obscuring special effects make conditions where you could lose track of all the players engaged in the same skirmish.

The interfacing also hurts the game as well, taking up way too much of the screen for comfort. Given the level of zoom on the action, this can lead to situations where you end up clicking on your HUD instead of a spot on the playfield in an attempt to run away. The ability to deselect your hero is also problematic, as it makes the basic controls of your character slightly more complicated than they really need to be. Although there is a button you can hit to instantly re-select your character, miss-clicking can screw you over. Thankfully, you can bind the command to select your champion to any button, but the camera command only ever remains pressing the selection button twice.

The shop system is something that has also been inelegantly handled. There are multiple shops scattered about the map, each with different items in them. It’s a holdover from DOTA that was supposed to help separate the different skill level of players, with more “advanced” players knowing what items are bought from where. It feels unnecessary in Dota 2, when the mini-map will ping which shop has the item you’re trying to buy. The organization of the items in the shop is also very lacking. The categories are by the type of item, but this makes finding items that affect specific statistics a hassle, requiring you to read all the tool tips and data for each one as you search. 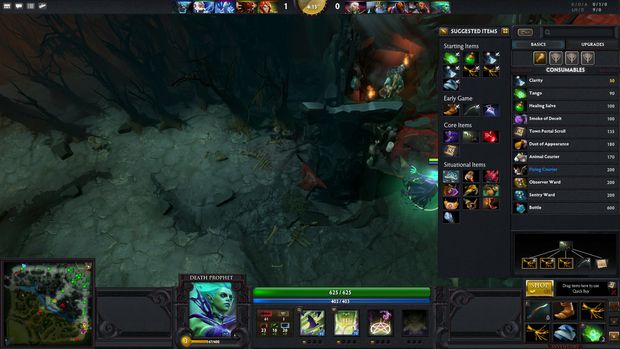 Dota 2 is still a beta product, and it shows. There are a variety of options that are unimplemented, or half-implemented. In private games, you can set up bots to play with, and they feel very reminiscent of how the bots are in Valve’s other games. Not many of the characters have bots to play with, and even on the easiest setting, most of them are annoying and hard to play with and against. Bot matches could still become something useful for training and practice, but as they are now, they just feel incomplete.

An option for a tutorial is visible, but remains unimplemented at the moment. There is stat tracking, and you can see what characters you like using, as well as success or failure rates with each. Some form of level tracking is shown, though it’s non-functional at the moment, which will probably be used for better skill assessment in matchmaking.

All in all, Dota 2 is a much slower affair than some of the other established MOBA games to have come out in the past couple of years. It feels like an odd mix of a modern game and an antiquated game. It’s clunky, and I would not say that it feels very friendly to new players looking to start playing a MOBA in its current form. Depending on how some of these unimplemented features turn out, they could make the game significantly more accessible for new people who are unfamiliar with the genre. A number of the problems I’ve found are things that can be fixed by the time the game goes out of beta. 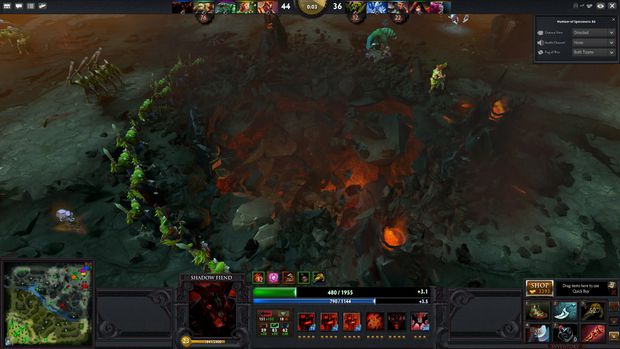 As it stands, Dota 2 feels highly aimed at fans of the original, who would claim that the other popular MOBAs are too simplified or too casual. For the most part, I would say that they will be happy seeking a new home in the sequel.

For everyone else, I feel that it is a wait-and-see situation. As for which MOBA game the famous Basshunter will choose as the best, and make a new song about, only time will tell.