All types of Devil May Cry fans seem to have formed their opinions on the upcoming DmC already, although to date there hasn’t been a whole lot to go on. The new game features a younger and more aggressive Dante and although Ninja Theory’s Enslaved was somewhat of a critics darling, not everyone was as charmed by the combat in that game.

At gamescom, Capcom and Ninja Theory were finally ready to show the actual important part. Not the hair, but the combat mechanics.

In DmC, young Dante winds up in a malignant version of the “real world.” With a mysterious spectral projection from a female in the game universe’s real world to guide him, Dante’s task is mostly to kick ass in the typical Devil May Cry style.

The regular combat is slightly tweaked from the previous iterations, yet undeniably recognizable. Gunshots at range, sword strikes, combos, and uppercuts to juggle enemies all make a return. Some melee combo attacks see Dante shoot out shockwaves that hit multiple enemies that were unfortunate enough to stand in a row. 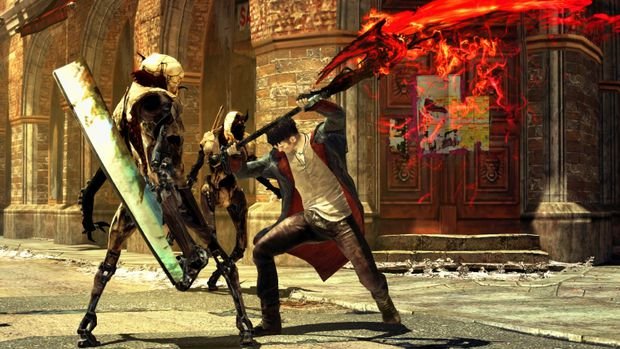 Compared to the previous titles, DmC places a lot more emphasis on aerial combos in terms of combat mechanics. There are a lot more juggling combos this time around and a few elements clearly illustrated this in the gameplay.

For starters, Dante has access to Demon and Angel powers that manifest themselves by grabbing enemies with a hook from afar (a Demon power) or by dashing forwards or backwards to maneuver yourself quickly between enemies. You can use these abilities to not only close the distance between you and the next enemy in the combo string of attacks, but also outside of combat for platforming and traversing the levels — both horizontally and vertically.

Using the Devil Trigger special ability, Dante blows all enemies in an area around him upwards and jumps up to join them. In a brief period of slow motion action, you can then kill as many enemies in a row as you can by destroying them in the air, using your skill with the combat system to chain your attacks from the top enemy to the one below them, and making sure you don’t miss any of them on the way down. During the Devil Trigger attack, your hair also turns white. So everyone can chill out, the all-important gameplay feature of white hair is still in the game. 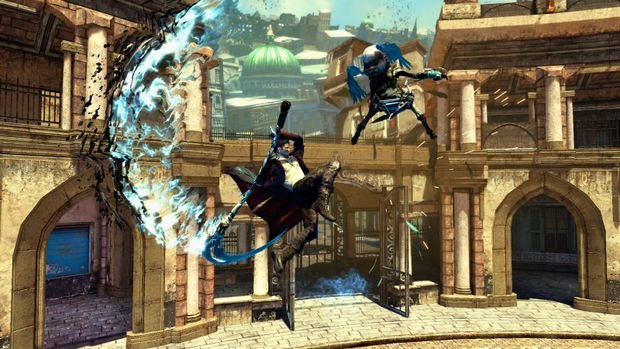 A few really cool aspects of the combat come from places where you don’t ordinarily look for it. The oontzy techno beat that blasts during combat is dynamic and reacts to your individual play style. During the Devil Trigger attack, everything goes to slow motion including the music, turning it into a very focused kind of super finisher move — provided you are skillful enough to chain everything correctly.

The camera is also a lot more action-focused, seemingly without breaking the combat’s flow or pacing. The dynamic camera will change distance and angles depending on the combat situation, and special finishers bring the camera up close and personal to show Dante ripping apart his foes before zooming out to the regular view. If you have played Enslaved before, you will recognize a lot of touches from that game’s camera work.

Ninja Theory’s experience with Enslaved clearly shows in DmC. The level design is of course wildly different, but aside from the different setting, the aesthetic feels somewhat similar to the studio’s previous game. A consistent pallet breathes life into the slightly off-kilter looking world, and the world itself gets ripped apart and changes all the time to keep the action flowing even when there is no combat. Moreover, Ninja Theory is taking their motion capturing one step beyond what they did in Enslaved or Heavenly Sword. 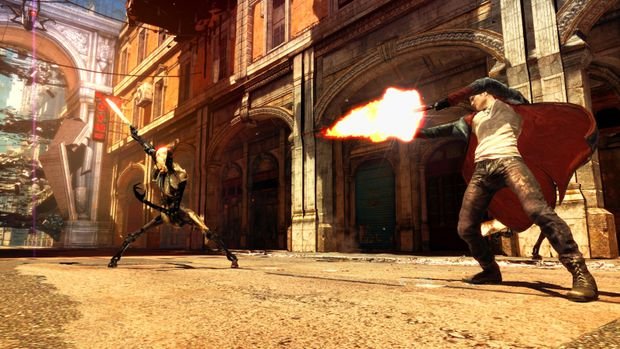 Ninja Theory’s Tameem Antionades spoke at length about his experiences working on Heavenly Sword and Enslaved during a GDC Europe session earlier this week. He highlighted the importance of not just having the right actors but also having a great motion capturing crew. They are using the same experienced crew for DmC as they did for Enslaved, and as Ninja Theory’s focus on the game is the narrative and cinematic one, it looks like DmC will have a lot more to offer this time around than any previous Devil May Cry title.

For those worried that DmC will simply be a complete Ninja Theory adaptation of your favorite action franchise, it’s worth noting that while Ninja Theory is using its experience with narratively driven action games, cinematics, and motion capturing techniques to focus on those parts of the game, Capcom is in charge of things like the combat mechanics. Basically, the game draws on the strengths of both teams in the fields where their expertise fits the best.

One section saw Dante run through a Cathedral, which kept shifting forwards as you progressed. The floors, the walls, the roof; everything magically gets torn away from you into the distance while you jump to the new floor sections in a bit of platforming. The result showed that at least the core mechanics of what you find in, say, Devil May Cry 4, is still there in some form whether it’s the combat or the platforming. 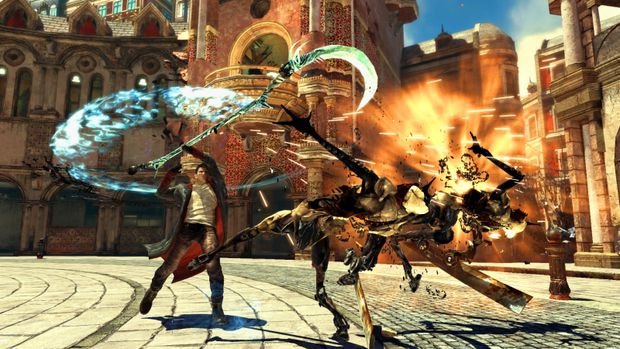 The only thing that had me slightly worried is that combat encounters looked like they were spread across a slightly larger space than the other games. Enemies take quite some distance from Dante when attacking him, which leads to a lot of jumping back and forth across the space to get to them. This might be to make the player use the Demon hook and Angle glide-dash mechanics to use the environment to your will. Most likely you’ll get the hang of it really quickly when you play it, but after Bayonetta it did look like there was slightly less tension to the combat in DmC.

Then again, it might have been the camera being pulled backwards further in these few instances and the dynamic camera does shift a lot to keep you engaged in the action. The game looks like it will have a lot of potential, and if the combat mechanics are solid at launch while there is an actual narrative that makes some kind of sense, fans of the old Devil May Cry games should definitely not discount DmC only because early videos looked different and they are unwilling to accept change.