Did my palms survive!?

Game accessory manufacturer Hyperkin recently announced the Pixel Art Controller line of PC / Mac gamepads. I took a look at the blocky SNES-inspired design and concluded that handling this hunk of plastic would have the same effect as rubbing your palms against a cheese grater.

The folks at Hyperkin were not about to let me drag their name through the dirt, so they hooked me up with a prototype controller so that I may get a feel for its construction. I spent the morning putting the beast through its paces, and I thought I’d share what I learned.

Again, this is a handmade prototype, so some of my criticisms may be addressed by the time the controller officially releases in September. 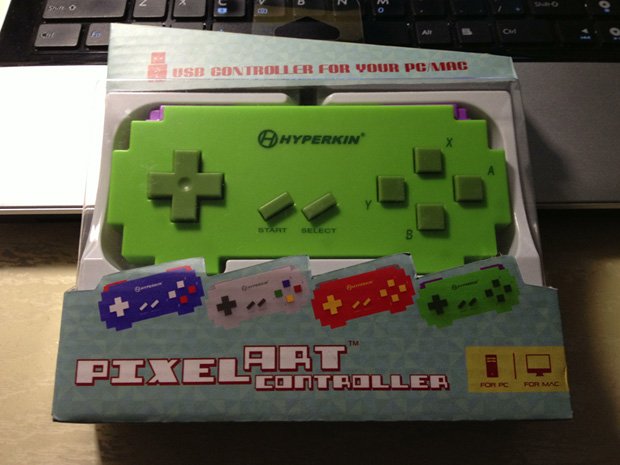 The Pixel Art Controller comes in a multitude of color schemes in addition to the standard US and European / Japanese SNES variants. I got sent Hulk green because that’s pretty much the choice of champions. It even has purple shoulder buttons because pants. 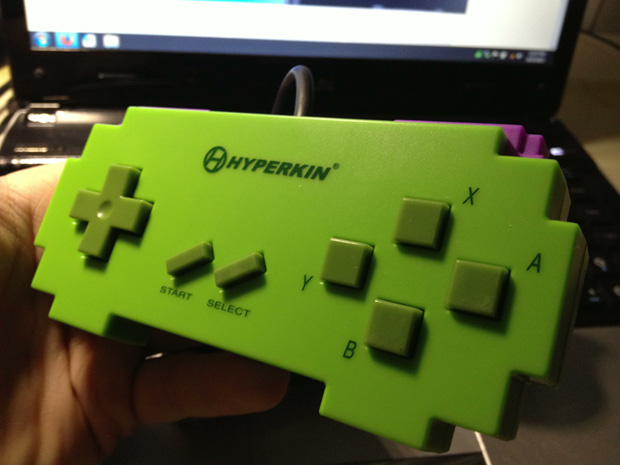 Here’s the controller in the buff. The layout is nearly identical to that of a typical SNES pad. Even the A, B, X, Y buttons are in the right configuration — I will never forgive Dreamcast and Xbox for flipping the letters around. The only hiccup here is that Start and Select have swapped places, though that’s something that can be easily redone.

The shell is a very hard plastic and the unit is extremely lightweight. Maybe a little too lightweight for my liking, but perhaps I could chalk that up to having grown accustomed to much weightier controllers with built-in rumble, battery compartments, and other odds and ends.

The buttons are very squishy and don’t have that “click” like typical first-party controllers do, which concerns me slightly. Thankfully, despite the unorthodox square shape of the face buttons, I don’t feel any sharp pricks when rolling my thumb across them. 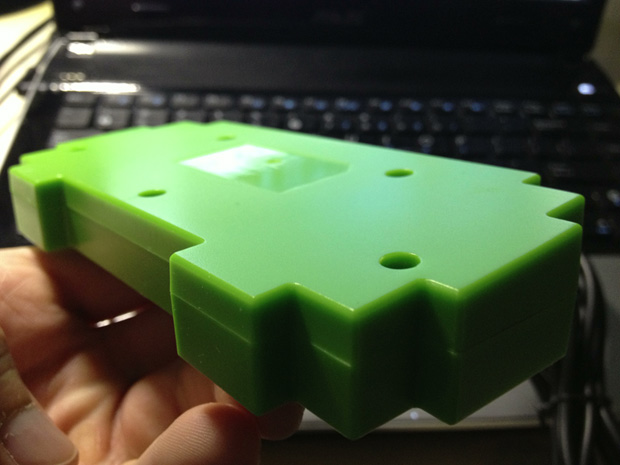 Nothing special on the reverse side except for a blank spot in the middle where I assume manufacturer information will be printed. I did notice that the back slants outward so that the controller is thicker near the top than at the bottom. It’s a very subtle difference compared to NES or SNES controllers which are flat. I don’t know exactly how this will affect players in the long run, but I didn’t notice any immediate benefits or downsides in my short session. 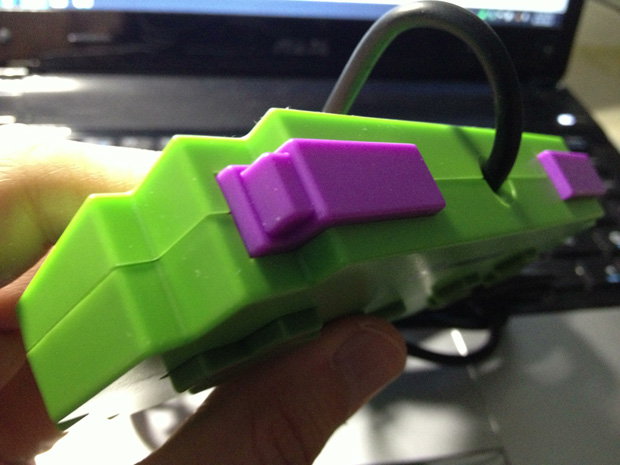 And here we have Hulk’s pants. The shoulders feel more loose compared to the face buttons, which makes it even harder to tell if you are properly depressing them. I just wish there was some kind of feedback, like a snap noise, to indicate when the shoulders or any of the other buttons have been triggered.

Lightly holding the controller in my hands, I didn’t notice any discomfort. Then again, you’re far more conscious of your grip when not playing a game. If I wanted to gauge my comfort level in a most extreme condition, I would have to test it with a most extreme game: 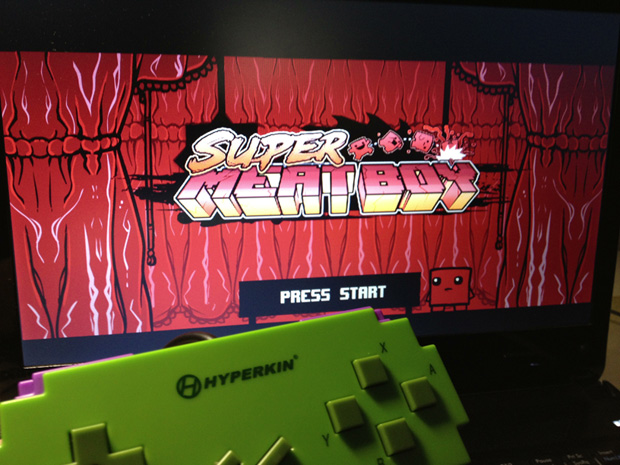 If the controller could survive Super Meat Boy, it could survive anything. I decided that playing through a couple of worlds would give me an adequate idea of how the pad would feel under a real-world scenario.

In an intense game such as this, my grip becomes increasingly more firm as the minutes tick by, as I’d assume would most others’. As I suspected would happen, I could feel the sharp edges digging into my index fingers as well as the patch of skin just below my thumbs. Not hard enough to leave any lasting imprints but just enough to make me feel a rather strange itching sensation. I’m thinking that if the edges were beveled a little more, Hyperkin could significantly reduce some of the sharp pressure while maintaining the blocky shape.

A much more concerning realization was that every so often my jumps wouldn’t register even if the button was depressed as far as possible. Or at least I thought the button was pressed down. Without the “click,” you can only hope you are applying enough pressure. Just to be sure this wasn’t the fault of the game itself, I retested with my 360 controller and suffered no similar issue.

Hyperkin hopes to get the Pixel Art Controller out the door in the next month, so I don’t know how many of its current shortcomings can be fixed in such a small window. From the beginning, I thought the pad was very eye-catching, a unique alternative to other USB pads that resemble classic game controllers. If the edges were just a hair smoother and the buttons just a tad more rigid, I guarantee it will make a world of difference.