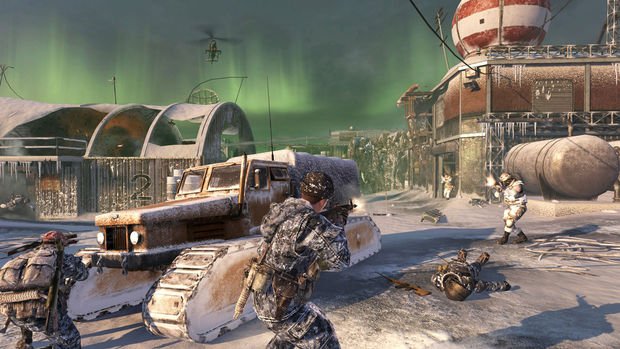 Black Ops, the latest iteration of the Activision-published juggernaut franchise Call of Duty, has received its first (of presumably many) DLC packs as a timed exclusive for the Xbox 360.  While most gamers fall into either the “don’t care” or the “already bought it” camps, some casual Call of Duty fans may be on the fence about a purchase.

With four new competitive multiplayer maps and one new zombie map bundled together at the current standard price of $15, the First Strike DLC just might be worth it to that hypothetical third group of gamers.  Read on for impressions of the individual maps. 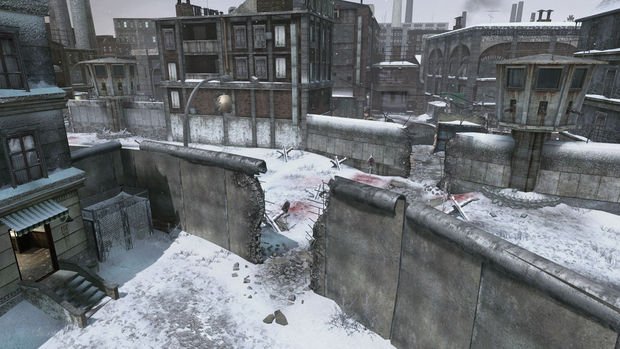 In addition to simply featuring new locales and map geometry, most of the maps in the First Strike DLC also have a special hook, further differentiating them from previous maps.  Berlin Wall has one of the more inventive gimmicks; running along the center of the map is a wide open alleyway guarded by autonomous gun towers.  While players can see (and potentially shoot) each other from one end of the alley to the other, traversal through the zone results in a swift death.

Turret-guarded off-limits areas aren’t necessarily a new idea, but typically they are used along the outer edge of a map to keep players in without resorting to baffling city planning or invisible walls.  Putting one in the center of the map changes the flow of the game up a fair amount, favoring long range combat over short. 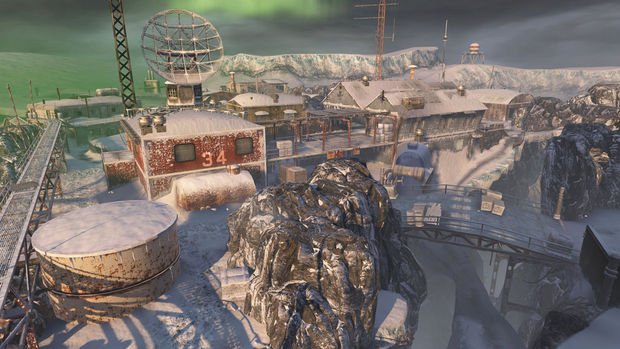 If Berlin Wall is the most inventive map in the pack, Discovery is the most visually appealing.  Certainly, the Call of Duty series has seen its share of snowy maps before, but rather than only white snow and grey stone, there is also an icy blue chasm splitting the map, and a beautiful green aurora in the distance.  Take that, standard brown and grey color palette!

Aside from adding color, the crevasse in the middle either funnels risk taking players over the central bridge or forces them to take the much longer road less traveled underneath.  Other points require players to jump from one side to the other, often leading to hilarious suicides.  Like in Berlin Wall, the wide open spaces in Discovery seem built to favor snipers more than most of the retail maps. 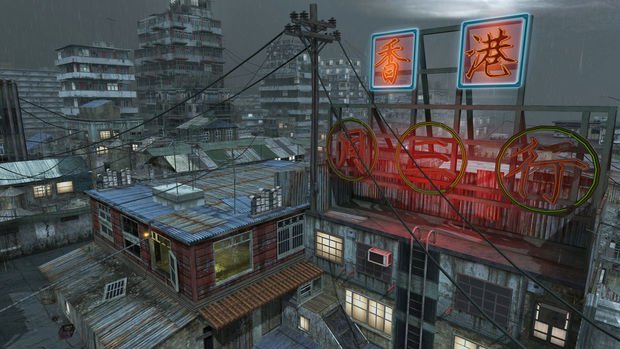 Easily the smallest of the four new competitive maps, Kowloon looks quite a bit like its counterpart from the Black Ops campaign.  Combat takes place on a series of roofs with various ramps and ladders to traverse the map’s multiple levels.  One building in the center of the map stands taller than the rest, with a general incline up toward it from every side.  The geometry obscures view from one side of the map to the other, and along with the myriad of indoor areas, Kowloon is the odd map out in that it favors running classes and short range weapons.

Its special feature is a pair of ziplines leading from the central building to either side of the map.  While they offer a fun, quick way to cross half of the map, and can sometimes lead to sneaky flanking maneuvers, most players notice a defenseless zipliner and will gladly take a free kill by camping the drop off spots or watching the windows where the zipline begins.  Ultimately, they are a neat gimmick with limited real use. 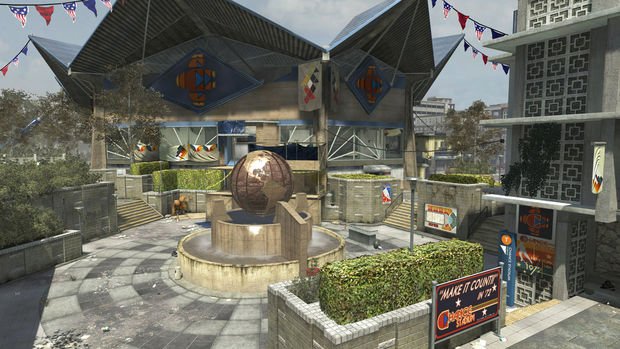 Of the four competitive maps, Stadium is probably the weakest.  Its strong point is in the location and the resulting feel.  Rather than taking place in a nondescript desert or a dilapidated city, Stadium looks unique simply because it is the only Call of Duty map that takes place in and around a small stadium.  The locale allows for a decent use of color, but it still seems washed out compared to Discovery or Jungle.

Much like Modern Warfare 2‘s Carnival, Stadium does little to differentiate itself from a gameplay standpoint, despite how much it differs aesthetically.  There doesn’t appear to be any special feature.  The wide open courtyard is a dangerous area to traverse, given the multiple windows overlooking it.  Some of the perches have only one entrance, allowing players to watch the courtyard with a single claymore guarding their backs, but they aren’t overpowered, since each window is vulnerable to the others. 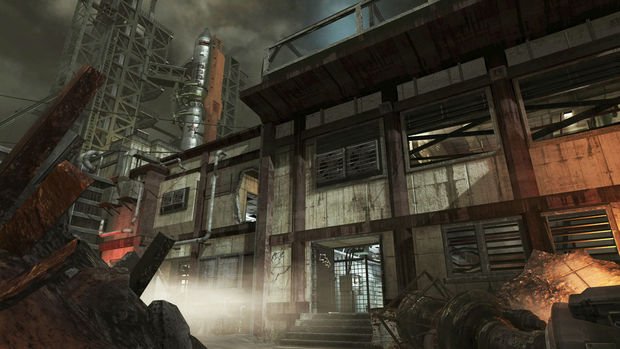 Lastly, there is the new cooperative Zombies map, Ascension.  Of all the maps in the First Strike DLC, it definitely does the most to change up gameplay.  This is expected, of course, due to the intentionally ridiculous premise behind Treyarch’s Zombies mode.  Ascension appears to be much larger than either Kino der Toten or Five, and certainly more intricately laid out.  It takes place in a Russian rocket launch site, and begins by sending the players far underground.

While the basic premise remains the same–kill zombies, earn money, buy weapons–some new weapons, perks, and enemies have been added to mix things up.  A sickle replaces the Bowie knife, matryoshka dolls act as cluster bombs, and the new Gersch device creates portable black holes to suck zombies into.  New perk sodas let the player run faster and allow him to drop a nuke when he is incapacitated.  In the intercalary rounds, spaceships crash onto the map, letting loose perk-stealing space monkeys, rather than the standard hellhounds.

Four Achievements have been added with this DLC, worth a total of 150 Gamerscore.  All four Achievements can be found on Ascension, and while they take some effort, they don’t appear to be particularly difficult, especially for those lucky enough to get some friendly outside help.

As a whole, First Strike is a pretty solid DLC pack.  1200 Microsoft points will always feel steep for a set of maps, especially for those who are either only interested in one mode or the other.  If you are still playing Black Ops regularly, you’d likely get your money’s worth with this DLC.  Otherwise, it might be wiser to postpone a purchase at least until it goes on sale.

Filed under... #Call of Duty#DLC