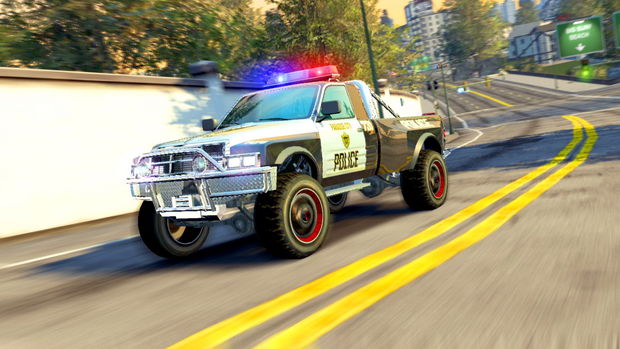 This past week, EA invited me out to give the new Cops and Robbers DLC for Burnout Paradise a test drive at their Redwood Shores studio. Can you believe that it’s been over year since Burnout Paradise launched, and they’re still supporting this game with new content? Criterion loves you all very much.

The Cops and Robbers mode is very simple — one team is the cops and the other team is the robbers. The goal for each team is to find and retrieve gold that’s located somewhere in Paradise City, and return it back to their home base.

Hit the break for more on the Cops and Robbers DLC.

33 new cars come in the Cops and Robbers DLC pack. All the cars are cop cars and for the most part, they’re reskins of other cars from the game. All of the cop cars have different stats — some have high speed but have a weak body, some are in the middle, and some have a strong body but are pretty slow. They all have different boost stats, too, but it’s not important, as all players lose the ability to boost when in Cops and Robbers mode. It’s an odd choice, and you really have to change up your strategy with the lack of boost.

Up to eight players can play together in Cops and Robbers, with four players making up each team. Everyone needs a cop car in order to play Cops and Robbers mode. Once you’re engaged in the mode, the cars for the Robbers will change in design a little — the sirens are removed, and the cars are all painted red.

Both teams will start off together as a group an equal distance away from the first gold stash. When you’re given the go, it’s a mad dash to get to the gold first. When someone gets the gold bars that are floating magically over the road, the gold bars will appear directly behind the vehicle and the car will lose half of its speed. Gold bars are heavy!

I started off on the cops side in the very first round I played in. The robbers were able to get the gold before my team could, and were making a run back to their hideout located in the Naval Ward. In order to get the gold back, my team needed to take out the player with the gold. The driver with the gold is slower, but he has three buddies riding his six, trying to protect him at all costs. Once you take out the player with gold, you’ll automatically get the gold. If you crash while taking the gold player out, the gold will spawn near the wreck on the road.

We weren’t successful in the first round, and the robbers were able to score. It was a three-round match, so my team still had a chance. After the first score, the gold will randomly respawn somewhere in Paradise City. It could be close by, or it could be clear across town. This time, it respawned on the far east end of the map. Luckily, one of my cop buddies was already heading in that direction and was able to get to it before the robbers. The cop got the gold and was heading back to the base located at the Country Club. The gold shifted hands a few times but we were able to score a point.

We were now tied up with one last gold stash left to deterimine who the winner would be. Long story short, my team lost. It’s been a long time since I last played Burnout Paradise, so all of the roads and shortcuts I memorized have long left my head.

That’s pretty much all there is to the DLC. One nice touch with this mode is that you can turn the traffic on or off. While it’s easier going through this mode with no traffic, I suggest always playing with traffic. It’s a lot more fun and traffic could play in your favor more times than not.

My major complaint with the DLC is with the game’s notifications. Every time either team is getting close to their base with the gold, a large notification screen pops up telling you how far the team is away from their base. It’s very obtrusive and blocks a good deal of the screen. I got into a few wrecks because I couldn’t see where I was going.

That mild complaint aside, Cops and Robbers is definitely worth picking up. It’s a lot of money ($10) for just one mode, but I had a ton of fun with it. Plus, just look at how much fun these guys have with the game.

The DLC is available now on both the Xbox 360 and PlayStation 3.