In case you haven’t heard, Awesomenauts is launching its Starstorm expansion, which is bringing all new content to the game in 2014. As the game’s first official meaty piece of DLC, the update will contain five new characters, more music, a new stage, replays, and a spectator mode. You can get a full look at what’s planned in the official roadmap.

Right now the first character, Ted McPain is available, as well as a new song, and team deathmatch mode. If Ted is any indication, Starstorm is going to be one awesome ride. 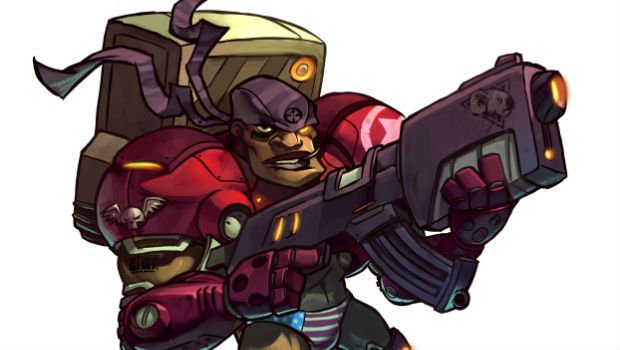 Ted McPain earns the immediate distinction of being one of the only three humans in the game, as well as the only African American addition to the cast — oh, and he also doesn’t wear pants. Right off the bat Ted stands out, and is not the “generic space marine” model he appears to be at first glance (especially if you rock his Party Boy skin) — though he does have a 40K/StarCraft space marine outfit.

In such a goofy game it would stand to reason that a semi-serious character wouldn’t really fit in, but after testing him out I’m pleased to say he feels like a true member of the crew. He somehow manages to pull off silly and serious in the same sentence, with a persona that’s dedicated to excellence, but with a touch of screwball to it — again, he’s not wearing any pants, here.

It helps that Ted is super fun to play as, and although he has undergone many fixes from his over-powered beta test state (even earning him the nickname Ted McOPain), he feels a lot more balanced in the live environment. His basic gimmick is that he can switch between a machine gun and a shotgun at any given moment — and while the former has infinite bullets, the shotgun has to be “reloaded” before you can fire it.

Basically what this means is that you need to have the shotgun “active” and unused to slowly restock your bullet count to the maximum of five. So while the shotty is your clear-cut superior gun for dealing with both creeps and enemy players, you need to micro-manage it correctly to really come out on top. It’s extremely powerful for sure, but only the best players will be able to really use it effectively, and it’s fun to learn how to strike this balance.

As each weapon is “active” and out, Ted’s secondary ability will change. With the machine gun he can “paint” an area of the map for an orbital strike, and with the shotty he can use a stimpack power-up, not unlike Terran Marines from StarCraft. Both abilities are fairly difficult to use, but can be extremely powerful if done right. The orbital strike is best used on lower ground, as it can raise up and hit enemies at a higher elevation; you can also paint a target right at a corner of an enemy turret, so when the creeps clash right at the base, the beam will hit the creeps 100% of the time. 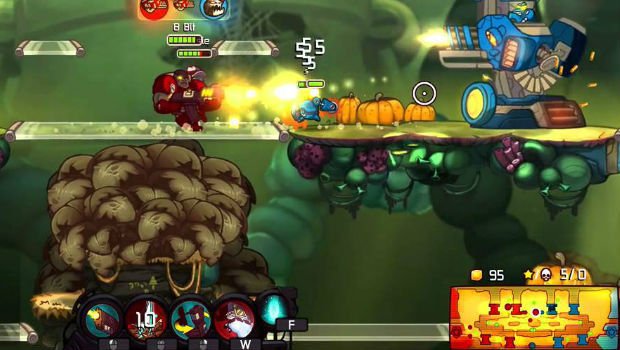 The stimpack has to be used at the right moment — usually before going into a teamfight. It knocks some life off Ted, but it also strengthens his power, and with the right mods, he can regenerate health or increase his movement speed. With the latter mod this is one of the only ways Ted can increase his maneuverability, because by god he is slow. Even with the speed boot upgrade he’s painfully limited in how he can get around, as he only has a medium-height single jump and no real escapes to speak of. It helps keep him humble in that sense, as the right players can run circles around him if they play their cards right and avoid a shotgun blast to the face.

My favorite add-ons for Ted in the shop are the ability to shoot grenades from your shotgun (which stay on the map for around 20 seconds), and drop a health pack from an orbital strike. Both powers add a ton of variety to Ted, as he’s able to not only drop health for himself, but his teammates, and even friendly creeps. The grenade power gives him more ranged capabilities, as well as the chance to set up traps like Yuri. The beauty of Ted is that he gets more interesting the more you play him, and his replay value extends with every upgrade you try out.

Ted is a welcome addition to the Awesomenauts cast, and I’ll be playing him for quite a while. It’s hard to believe the game is still going strong after such a smash hit of a Kickstarter, but here we are, waiting for four more characters and a heap of extra content next year. If you haven’t picked up Awesomenauts yet, make sure you grab it during a sale and at least give it a try — it has an excellent community behind it, and the PC version of the game will be well supported for at least a year.