Assassin’s Creed IV, point blank, may be the best game in the series outside of AC II. It offers the least amount of real-world trappings for those fans who dislike the sci-fi overarching plot and it features the only true open world in the franchise. It’s also a hell of a lot of fun to be a pirate.

While the next-gen versions of Black Flag might not offer up anything new, the good news is that there’s nothing wrong with them either. 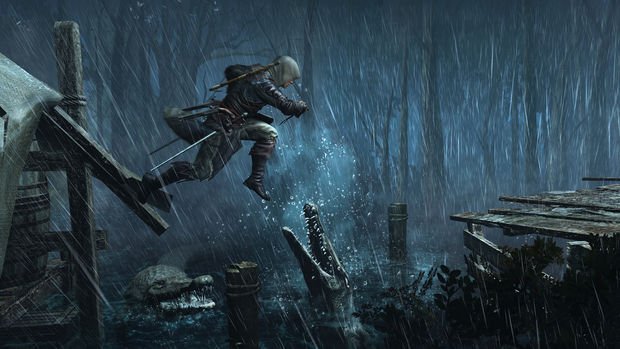 Even though I was just planning on testing out the next-gen versions for a few hours, I ended up getting halfway through a second playthrough before I stopped. It really is a gripping game, and the multiplayer component is better than ever. After playing the 360 and Xbox One versions side by side though, I was surprised to find that they look relatively the same.

If you’re hoping for a massive visual upgrade, you’re going to be disappointed. Ubisoft has said outright that they didn’t want the Xbox One and PS4 versions to look that much better. The official reason they gave was that they didn’t want the 360 and PS3 versions to fall behind — so all you’re going to get is next-gen plants (that basically just move with the wind and bend as you’re walking through them), some better lighting, and a slightly smoother framerate.

In some ways, it’s a shame that Ubisoft ditched the attempt to make the next-gen versions look markedly better, as it could have been a compelling reason to experience the game all over again with a new engine. It’s not like the 360 and PS3 games looked poor, and I would have loved to have seen what Ubisoft could do with the power of the new consoles.

Even so, Assassin’s Creed IV does look great no matter what platform you’re on, so it’s not like it’s a complete waste. While the Xbox One controller doesn’t add much, the PS4 allows for touchpad map manipulation, share button features, and of course, the grandaddy of all features — Vita remote play.

If you haven’t picked up the game yet and are looking at which version to get across every platform — consider the PS4. Not only does it have complete feature parity with every other version, but it features the extra Sony-exclusive Aveline missions that are also on the PS3 on top of all the goodies mentioned above. There is a $10 upgrade program if you own the original in some locations, but you cannot transfer data of any kind — single- or multiplayer.

There’s nothing particularly sexy about the next-gen release of Assassin’s Creed IV, but it’s still the same great game as the 360 and PS3 versions. If you already own it there’s very little reason to upgrade here. Should you pick one iteration up at some point, however, you really can’t go wrong with a next-gen console.