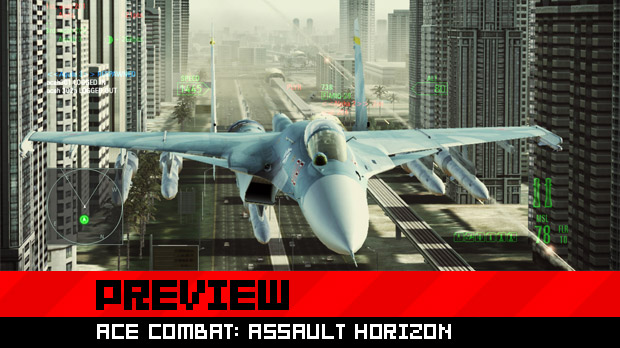 The new Ace Combat is not titled Ace Combat 7 for good reason; it’s a big departure from the previous games in the franchise. Perhaps because the audience for these kind of games has dwindled on the consoles, Project Aces has adapted its formula to fit a more shooter-oriented audience with Ace Combat: Assault Horizon.

The new cinematic Close Range Assault system gives dogfights a more visceral feel, but don’t we play these games to shoot four AMRAAMs at long range followed by a couple of AIM-9X missiles when we’ve closed the distance to enemy planes?

As part of Namco Bandai’s gamescom showings, a helicopter gunner section and a new multiplayer mode were elaborated upon. After seeing it, I honestly don’t know how to feel about this new title. 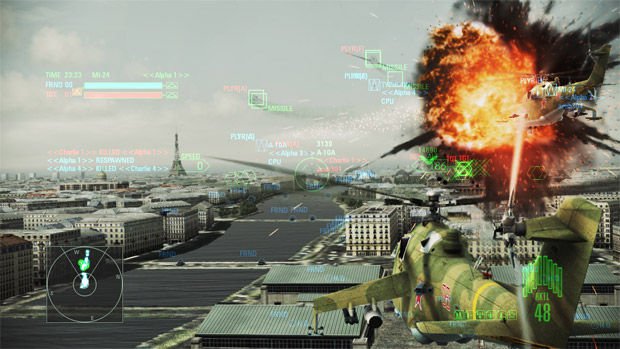 Assault Horizon has a different cinematic and story driven approach than Ace Combat 6. In-game cutscenes during which you are not in a plane can be manipulated by looking around with your head, and instead of relying on the traditional cutscene videos there is a bit of a better flow from level to level to tell the story.

Starting the game, the player sits through a Black Hawk gunner shooting gallery that could’ve come straight out of Call of Duty or any modern warfare FPS that has a helicopter with a gunner section. A cutscene even shows someone in a helicopter with the mask from Modern Warfare 2‘s Ghost. During an assault on some place in Eastern Africa, you blast hundreds of enemies into oblivion with your gatling gun. It’s fun, but it’s not really why people play Ace Combat.

These helicopter missions don’t form the bulk of the air combat, however, as indicated by the game’s multiplayer mode called Capital Conquest where things are a bit more traditional. 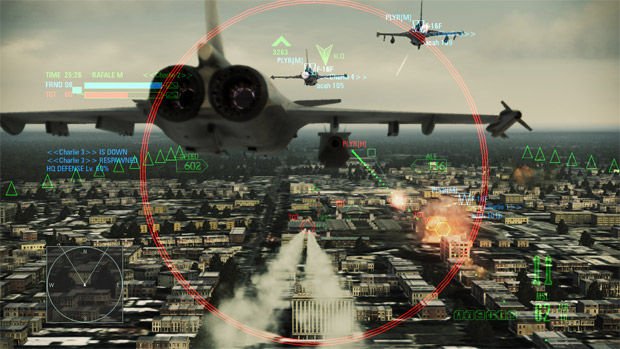 Players select a loadout with skills they earn (think perks) that can affect such elements like better turning rates, increased missile damage, and the like. Special team sharing skills affect an entire squad, with up to four players in a squad. This means that you’ll likely have two squads fighting alongside each other in a match, preferably with each squad member selecting different team sharing skills that complement the squad as a whole.

You will only unlock skills online, again similar to Call of Duty‘s progression system. During the match, you can score points to progress by destroying enemies, achieving objectives, winning matches, and even by attaining bonuses for getting a “revenge” kill on the person that shot you. 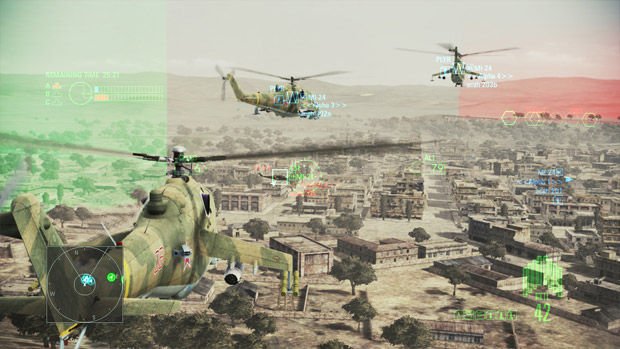 The blatant Call of Duty influence on Ace Combat: Assault Horizon is present on a lot of levels, including the more realistically grounded story and environment. Assault Horizon won’t feature any ridiculous super bosses, and it’s set in our world.

You can of course customize your aircraft for online play in all the ways you’d want to, not just for weapon loadouts but also for paint jobs. If you want to fly around in a purple F-22, you can. It’s an interesting approach to the combat flight sim genre, but some of the stuff like the helicopter gunner sequences don’t feel like they really fit into an Ace Combat game. Then again, the multiplayer combat is a bit more traditional and all the jets and real world weapons are there for your enjoyment.

When asked if this new, more realistic and shooter-style version of Ace Combat would be the new direction for Project Aces, or if they would make a proper Ace Combat 7 down the line, producer Kazutoki Kono responded that the team is pretty small and that they’d see where things will go after Ace Combat: Assault Horizon ships in October.