Back at E3, Nick Chester had a good look at Mass Effect 3 and the new ranged and melee combat mechanics that were played on the Salarian homeworld. During gamescom, we got the chance to take a closer look from the perspective of what fans of the franchise will be looking for.

Has BioWare kept those elements intact that made Mass Effect 2 such a beloved game, or did they change too much in the quest to make this final chapter the biggest and best game in the series?

During a mission on Sur’kesh, the Salarian homeworld, Shepard is tasked with helping out his old friend Mordin who is working on “a cure for something that impacts a species.” As it happens, he is working with a Krogan female on something. While the words “cure for the genophage” were not uttered during the demonstration, fans of the franchise can pierce through the veil of tightly orchestrated and rehearsed presentations.

With Liara and Garrus as his squadmates, (male) Shepard has to fight off Cerberus troops who intend to disrupt Mordin’s work and defend a sort of quarantine pod that the Krogan is inside when the planet is attacked. Even Wrex is mentioned in passing, although he sadly didn’t make an appearance just yet.

As others have noted before, the revamped combat system does seem a lot tighter. Weapons can be modified in different ways on a workbench of sorts, with statistics in stability, magazine size, fire rate, damage output and accuracy being the five modifiers that define the weapons. 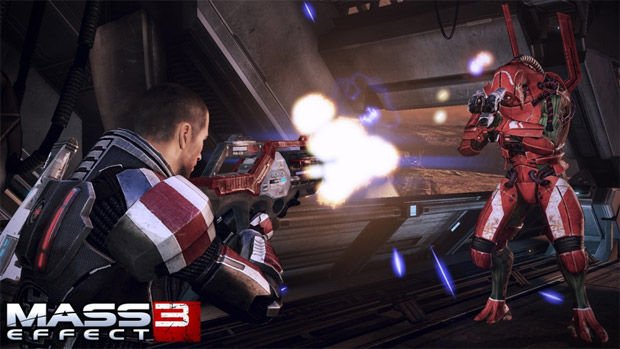 A new assault rifle shot a lot slower, but also a lot heavier to take down the invading Cerberus troops. The demoed Shepard was a Soldier class, with the usual Adrenaline Rush and different types of ammo at his disposal. When you take cover and want to hop over it, you now get an arrow that shows you which way you will hop over it. This might feel unnecessary to most veterans of the series, although it did look nice to have some sort of feedback to know when you can expect the fabled Commander to actually hop over cover instead of not doing so.

The omni-blade, while powerful, doesn’t give you an instant kill either. A new grenade acts like a slow motion weapon, giving you the tactical advantage to escape tough situations or wipe enemies at a faster rate. From the looks of it, combat is a lot harder in the third game. It was even being said that Normal difficulty is now more like Veteran in the old games.

Despite the combat changes, which seem welcome and not likely to alienate anyone who loved Mass Effect 2, the mission structure seemed mostly the same as what you’ve seen in the previous game. You fight a few waves of enemies, you run to an objective to push a switch, and you make some dialogue decisions. Which is probably for the best, as the third part in a trilogy is not really the best place to start breaking what wasn’t broken in the first place. 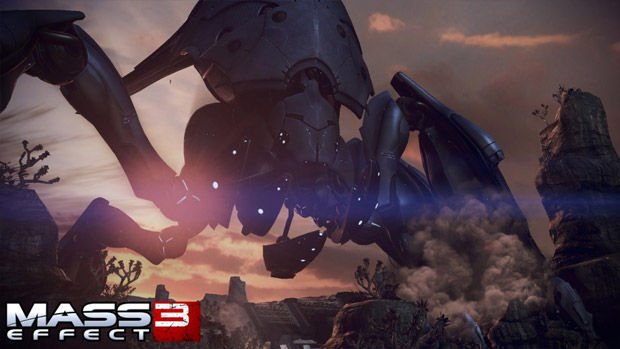 The levels did look like they were less obviously meant to show you where you could take cover, like in the past games. They seem more varied as you go from room to room, and enemies can drop from the sky or force you to move around the tactical space for better positioning.

During the mission on Sur’kesh, a deadly Atlas mech enters the fray. Controlled by a Cerberus pilot, it’s an evolution of the slow and killer robots found in Mass Effect 2. The Atlas shoots out smoke grenades, which doesn’t only occlude the enemy from view but also makes his health bar disappear from the UI. If you are able to, you can even kill the pilot and take control of the mech; but the Atlas will raise his arm to protect the pilot canopy when he starts taking too much damage in that area.

With Clint Mansell scoring Mass Effect 3, some fans were worried that their beloved soundtrack would change drastically. They shouldn’t worry; the soundtrack evokes music from the past games and sounds great.

This was especially evident during a mission near the start of the game, when the Reapers attack Earth. You see the Reapers lay waste to the cityscape while you run through some of it, helping some people along the way (but to what effect?) and even meeting a certain high-ranking military officer from the past games — probably depending on the choices you made in your playthroughs. 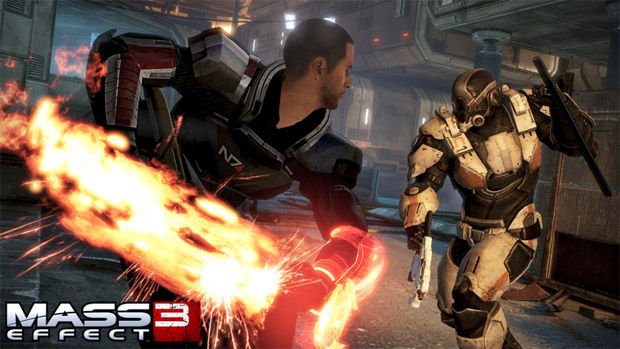 After some events, Shepard must help save Earth. Rally the races in the galaxy. Create a massive fleet to strike back at the Reapers. End what has been started when Saren fell under the influence of the Reapers, or arguably many cycles of galactic life ago. But not before departing on the Normandy with Ashley covering your approach to the iconic ship, which now has an Alliance logo behind its name.

Mass Effect 3 doesn’t look like it will be a major departure from Mass Effect 2, with a lot of things that worked last time around seemingly being left untouched or simply tweaked and polished. Other elements like the weapon upgrade system, some new skills, grenades, much more varied enemies with greatly improved AI routines, and more varied level design all portray a sense that BioWare did not want to depart too much from a game that sold well and won plenty of awards.

Anyone who is dying to see how Commander Shepard will protect his investments in his favorite shops on the Citadel will have to wait a few months yet. While Mass Effect 3 doesn’t look like it will be a major departure for the series in terms of huge changes in the core design, I think most fans will be perfectly happy with the opportunity to finish the fight even if it played exactly like Mass Effect 2. With the current improvements in place, we should be in for a treat that’s more tasty than Pyjak stew.