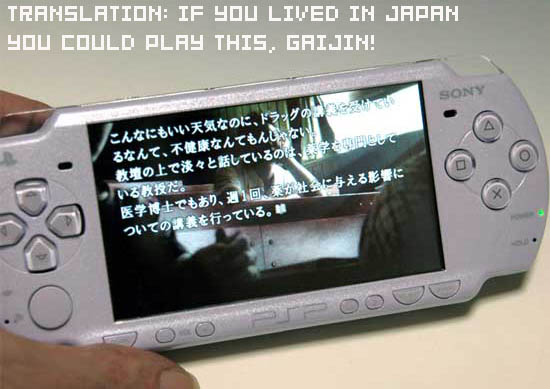 For some reason I love playing selections from my favorite games of all time on handhelds. There’s something about the charm of having PSP games, a full SNES library and a copy of Chrono Trigger in my handheld that makes Colette a happy girl. That being said, it’s starting to appear as if the Japanese are making a habit of that very thing with the PS3, using the PSP as a remote to play certain titles that the PSP can handle.

The newest title that seems to run just fine on the handheld is Chunsoft’s “sound novel” Imabikisou, which I salivated over on the front page a few months ago. All you have to do is boot your PSP from a  Wi-Fi spot and you got instant portable scaries. Considering the fact that it’s not a graphics-intensive title, it isn’t as rockin as if you could play, say, Assassin’s Creed on your PSP, but I’d still like to check it out. Apparently Lair works in this way as well, but since no one wants to play it, no one is sure of how well it runs.

[Via Siliconera – Thanks Adam!]