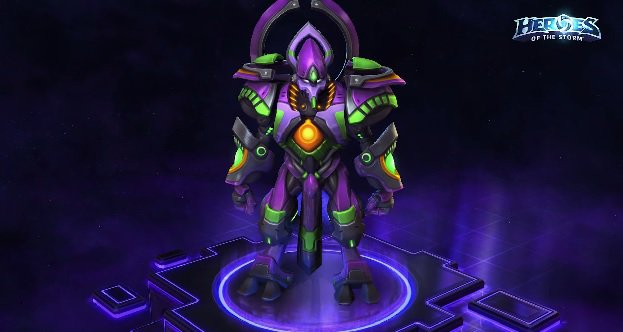 Heroes of the Storm‘s Artanis isn’t dropping officially until October 27, but those of you who pre-ordered Legacy of the Void can play him now, as part of an early access program.

While Artanis might be a formidable foe within the confines of the StarCraft universe, I’m not sure I’ll be using him to suit my Warrior needs.

In terms of his style, Artanis reminds me less of a traditional “tank” and more of a Sonya-like character. His kit is very aggressive, and outside of his self-preserving shield passive, he doesn’t really have a whole lot of skills that directly help or guard your team. Instead, he seems to be focused on survivability and screwing with the enemy with sustained damage. I need to spend more time crafting builds, but he does have the potential to be more tanky or DPS-centric with a wide variety of skills.

His Q is very fun, as it dashes forward for damage, then returns on the same line for more. On the flipside it’s often not very practical outside of wave-clearing, and it really seems like there should be a toggle option to disable the second dash. This meshes well with his E however, which fires an orb skillshot that switches places with another hero if it connects — sadly, it does not work through gates, so you can’t troll enemies attacking your towers, and it suffers from the fact that it’s one of the slowest projectiles in the game. Artanis’ W is less exciting, as it just queues up a double-hit basic attack at will. Later on you can buff it to trigger a charge, but it’s a very situational ability. Finally, his passive triggers a shield after he drops to 50% health.

Both Heroics are a ton of fun to use, even if their value is inherently limited by long cooldowns. My favorite is Purifier Beam, which has an unlimited range, and chases an enemy for eight seconds. It’s hilarious in certain situations, like when a foe is guarding an objective, as you force them to run around avoiding the beam. It’s also a beast at level 20, as you can buff it to move to another target after one dies — a killer in teamfights when people are getting picked off. The other one, Suppression Pulse, fires a single beam that blinds enemies for a few seconds and does a light amount of damage (typically not enough to even finish a hurt enemy off, but enough to change the course of a teamfight).

It’s important to note that he has no real escape capabilities, and even with his passive shield, he can get wrecked by roaming enemies or assassins. If you’re very resourceful with the orb you can make some crafty getaways by shooting them immediately after a rush, but for the most part, running away and using it will inherently put you further away from safety. Because he’s been released early for StarCraft II: Legacy of the Void owners, he also doesn’t have any skins yet outside of the color variations for his base model — yep, even the amazing Master Skin Eva Unit-01 pictured above isn’t ready quite yet.

Unless you were already going to get Legacy of the Void without question, I wouldn’t recommending springing for the Artanis early access period, and you’d probably even benefit waiting a few weeks to try him for free, or when he’s priced at 10,000 Coins. At the very least, now you can complete the dreaded “Warrior” and “StarCraft Hero” daily combination in one fell swoop!