The most exciting part of my Homefront: The Revolution PAX Prime theater demo was a newspaper. I caught a fleeting glimpse of the headline, surmised from that excerpt that I would find a delicious morsel of worldbuilding, and made it my mission to find said newspaper once my hands-on time began.

Unfortunately, Homefront: The Revolution plays like mulched garbage. The sensitivity slider made my reticle either too sensitive or not sensitive enough (commenters, on your mark) and the gravity of Earth-2 was twice the gravity of our Earth, so I did not much feel like struggling through gunplay and movement for a smackerel of potentially interesting storytelling.

From a design standpoint, the game ostensibly has everything we expect from shooters in a post-Far Cry 3 world. The gun customization is a clever idea, the constant battles between rebels and Korean forces make the open world feel alive, and it looks ‘aight. But even with all these toys, a simple texture energized me more than a thousand rail attachments ever could. 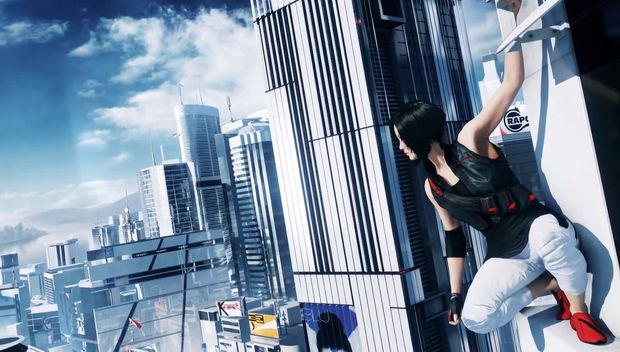 I had a similar experience playing Mirror’s Edge Catalyst. There’s a sequence early on in the demo where the augmented-reality device in Faith’s eye activates, pulling up a wide array of Apple-themed cyberpunk dystopian filler text. My eyes lit up and a grin splayed across my face. It was gone before I could fully enjoy myself, but it was just enough of a amuse-bouche. Even sitting here now, a good two weeks away from PAX, I can recall the metaphorical taste on my eyeballs.

The difference between the Homefront and Mirror’s Edge demos I saw is everything after the world building. Mirror’s Edge is aesthetically distinctive, and one of the demo missions had Faith deface a corporate billboard. Nothing was quite as exciting as that initial text dump, but you could see how it all connects. Homefront is visually and tonally dour, with explosions as the interaction de jour. There’s nothing about Korean-occupied Philly that even screams Korea. The enemies are profoundly generic. Even when the plot elements in Mirror’s Edge Catalyst danced on the edge of silly, they had a flavor all their own.

From what I’ve seen, Homefront: The Revolution doesn’t fully understand the tools afforded by its well-established setting. There’s that nifty trailer with the kid reading the propaganda, but aside from that the game’s demos and marketing exclusively play into the underdog fetish inherent to America. The day-to-day lives of Americans living under Korea’s thumb are far more interesting than the men and women killing soldiers on the ground. I understand that can’t be the entire focus of a game, but nothing about Homefront — from the guided demo I saw last E3 to the demo I played this year at PAX — makes me believe this game will fulfill my needs.

(Also, man this game does not play well. I feel like I need to hammer that part in.)