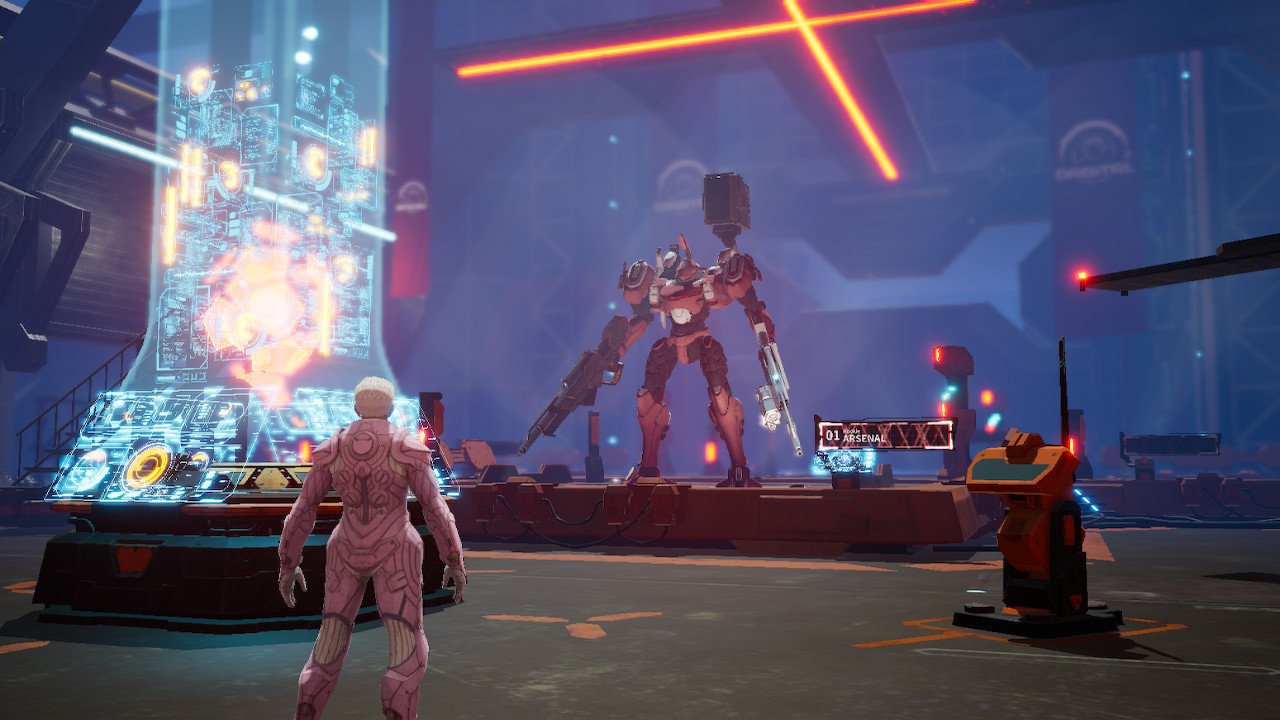 Baby you are the prototype

Earlier this year, the Destructoid staff posted their list of the 2019 games that we’re most excited about. A variety of diverse and interesting games made the list, including a few that have already launched to critical acclaim. For my entry, I settled on Daemon X Machina, the upcoming mecha action game from Marvelous. When it was revealed, I was immediately enthralled with the fast-paced robot combat, the desolate visuals, and the vast customization possibilities.

In that article, I likened the game to Custom Robo, though now that I’ve had a chance to test it out with the limited time demo available in the eShop, I realize that comparison is inadequate. Daemon X Machina is very much its own thing, and after just four missions, it’s still the game I’m most looking forward to this year.

The Prototype Missions demo starts out with the pilot creator, giving you a few choices of hairstyles, facial compositions, gender, and the color palette of your suit. I create an old man and deck him out in pink and white, like if Soldier 76 borrowed Mercy’s Pink skin. Upon awakening from stasis, my character, whom I named Gordie, is introduced to the AI unit known as Four who informs me that I’m an Outer working for an entity known as Orbital. I get access to my giant robot, known as an Arsenal, right away and head out on my training mission.

When I first start up the demo, I’m playing it in handheld mode. It looks…okay, like something a generation or two old. It’s still playable, though the HUD can be hard to make out. Everything is far more vibrant and clear when docked. For the four missions included here, not too many colors of the rainbow are seen on screen but the cell shaded graphics are crisp.

Handling of the Arsenal takes just a few minutes to get the basics down pact. The mech will jump and fly with the “B” button, boost by pressing and holding “Y,” and drop from flight by pressing the left Joy Con thumbstick. Each arm holds either its own weapon or a defensive tool, like a shield, that is activated with the right and left Z-trigger buttons while the “L” button controls its own weapon, which for the demo is the SAW-AM02 Thunderbird missile launcher. Getting an enemy directly in your sights isn’t a strict requirement as the game is generous with how well your weapons hit their targets. Enemies in your sights will have a box appear around them in one of three colors: white for when they’re in range, blue for when you’re locked on, and red for when you’re attacking them.

The first three missions really get me to push my mech to its limits, jumping in and out of combat, learning how to speed across the map without totally draining my stamina, and how to avoid taking too much damage. Most of the enemies I face are rogue AI robots that I’m contracted to kill. Two of the four missions are extermination missions, while the third is a defense mission where I battle both robots and other mech pilots. Nothing here is that difficult, but this third mission does give me troubles navigating the city streets. It’s much easier to fly, but I prefer the handling of my mecha as it glides across the ground.

These missions give a brief glimpse of the conflicts I’ll be tackling in the final game. Besides myself and Four, there are other characters representing different factions of this shattered world. Reaper of the Western VII and Rose Queen of the Panzar Crown are just two who are included in the demo. Some of these mercenaries help out in battle, others act as my competition. A snippet of their stories, as well as their motivations, is told through pre-mission dialogue and banter on the battlefield; just enough to build intrigue about all these different organizations operating in the post-moon fall Earth.

The fourth mission is a boss battle against a massive robot enemy with multiple weak points to strike. On my first attempt, I foolishly arm myself with my shield and a sword I scavenged from the wreckage of an enemy in an earlier mission. After my Arsenal is destroyed, I jump out and attempt to take it down on foot. Obviously, that’s not going to happen, and with the other mercenaries on my side not really doing much damage to it, I admit defeat and restart with a smarter weapon layout: a gun in one hand for long distance firing, sword in the other for close melee damage.

It actually takes me about 10 minutes to strike down this massive piece of machinery. Its attack pattern is easy to avoid, but its movements can be downright annoying. Many times when I zoom in for a heavy strike, it ruins my plans by jumping halfway across the map. Not only that, but one of its abilities generates a forcefield that pushes nearby Arsenals away. On several occasions, it does this to me, pushing my mech out of the bounds of the battle. When that happens, you lose control of your mech as it slowly flies back into the designated battle area. I understand that giving players total control of their robot when they go outside the lines could lead to people “cheating” their way through the game, but there has to be a happy medium here.

Besides that annoyance and one or two instances of framerate drops, the Prototype Missions demo does its job in getting me hyped for Daemon X Machina. It’s not exactly what I thought it would be and I can see myself avoiding handheld mode for this game as its involved HUD is better suited for my television screen. But it’s damn fun to play and I can’t wait to see what kind of custom robos I’ll be able to cook up when it launches this Summer, exclusively for Nintendo Switch.