Garden Warfare was astounding. It was a good shooter. It was also a good Plants vs. Zombies title, despite being a shooter. It had loads of free DLC. The game wasn’t perfect, but I was hooked — first on Xbox 360, then again, doubly so, on PC. My free time suffered greatly at the hands of its lengthy unlock system, which tied new characters, cosmetics, and one-time-use items to semi-random booster card packs. Yes, it was a grind. No, you didn’t need to resort to microtransactions.

The game garnered some six million players, which is good enough for a sequel. I’m sure those optional purchases helped. In Plants vs. Zombies: Garden Warfare 2, the undead have overtaken Suburbia. Whereas the last game’s Garden Ops mode had four plant heroes fending off zombie hordes in wave-based combat, the new Garveyard Ops has zombies playing defense for a change.

There are new characters, of course, but the returning cast has been tweaked (how, exactly, I’m unsure; but there will at least be rebalanced stats and abilities). My favorite of the fresh faces — and not just because he was the only one I got to play as — was the plump little Imp. He can hop in a mech and launch a barrage of missiles or stomp on pesky plants. Good #Titanfallsynergy. 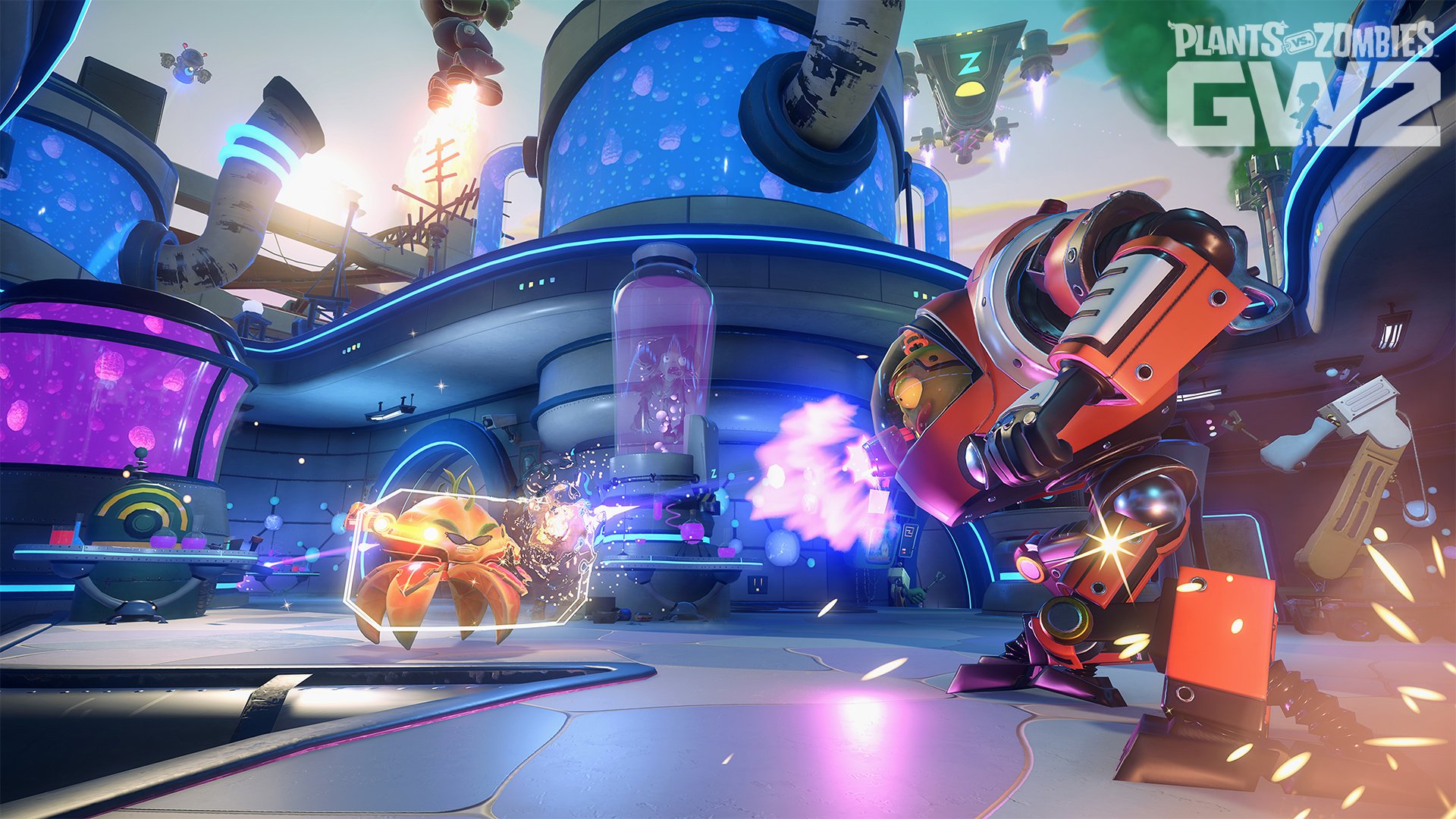 One of my teammates was a melee-centric superhero zombie named Super Brainz. There’s also going to be a dedicated zombie sniper character, finally, and a sorceress. All told, there will be six new classes from the past, present, and future. Speaking of: one level is a time-travel theme park, as in, a theme park whose “attractions” are accessible via time travel portals. Clever.

What else? Every mode supports split-screen play, which not even Halo is offering any more, and solo players can compete against AI if they’re unwilling or unable to dip into player versus player (which was the best part of Garden Warfare). There will be private servers this time, as well as 40 characters at launch and regularly scheduled free content updates. PopCap wouldn’t give any concrete details about character transfers other than “Yes, that’s happening.” Still great news.

I wish I could give more detailed hands-on coverage but, shortly into our round of Graveyard Ops, the power went out at EA’s preview event. Swearing ensued. I think an Xbox One even broke. Bummer. I’m curious to see PopCap uncover more layers of the Plants vs. Zombies universe — it sure has gotten strange since the original lawn defense game debuted six years ago.