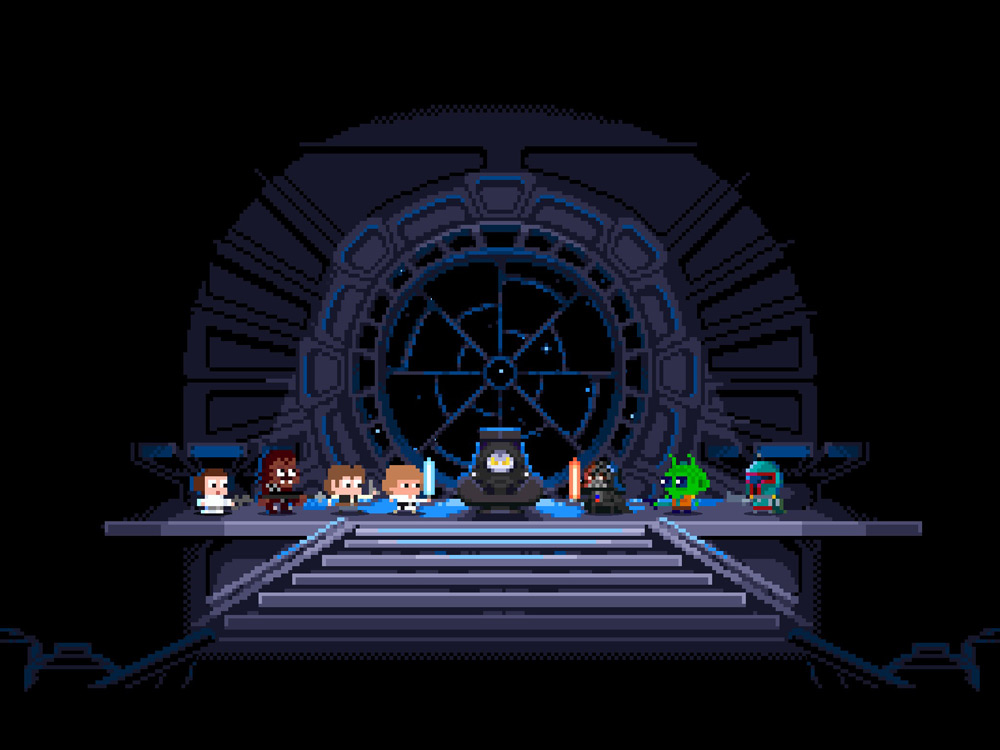 A long time ago, in a toy store far, far away

When I bought Bloxels last year, I didn’t realize just how much fun I’d have making my own levels with incredibly simple-to-use software. Was it meant for little kids? Sure, but I have the maturity of a nine-year-old so it was right up my alley. With the Bloxels board, I spent hours trying to recreate the original Metroid. This year, I’ll be spending the holidays working on an epic Princess Leia adventure with Star Wars Bloxels.

From Pixel Press and Lucasfilm, Star Wars Bloxels has the same, simple-to-learn level creation tools as the original, but infuses the whole package with that Star Wars charm. With the 13×13 square board, it only takes minutes to complete a simple level, or I can plan ahead for a massive labyrinth that players can get lost in. Since receiving my copy, I’ve had a blast trying to recreate my favorite stages from the Super Star Wars trio of games.

Bloxels technology works as so: I choose from eight different color blocks and place them on the Bloxels board. These blocks represent terrain, enemies, hazards, water and more. Story blocks allow me to add dialog and story instructions to my levels. When I have the design ready, I snap a picture of it with the app and it replaces the blocks with in-game assets. In the app, I can then change out the assets until I get the look I want. There are five stage designs to choose from, complete with backgrounds: Hoth, Death Star, Endor, Jabba’s Palace and Mos Eisley. Each level design may have its own version of the included characters. For instance, Leia in the Jabba’s Palace stage is wearing her Boushh outfit. It’s a nice touch.

Only the original trilogy of films is included here. While that means you won’t have to worry about accidentally playing a Jar Jar stage, it also means no Rey or BB-8. When levels are finished I am free to load them to the Play and Share board where they can be enjoyed by others. I tested Star Wars Bloxels on both my iPad and my LG Android and can confirm it works perfectly on both devices. In fact, if you want to see what the levels look and play like, you can download the Star Wars Bloxels app right now and give it a shot.

There are a few drawbacks to this version of the software. For starters, it’s just Star Wars. While the original Bloxels let us create our own characters, here we are limited to just those found in the Star Wars Universe. The good news about this is they’re exquisitely animated. The swinging of Luke and Vader’s lightsabers are far more detailed than what can be made with the original. All of the characters here, from Boba Fett to the lowly Imperial Soldier, are well detailed despite their size limitations. While it would be fun to have Greedo square off against a creature of my creation, the included enemies work just fine.

The bigger issue is the board requirement. With Bloxels, if I didn’t have the board available, I could still craft levels and characters in the app. Here, it seems I always have to have the Star Wars Bloxels board nearby if I want to work on a project. I get why that is because the board is basically pointless with the original app, but requiring it here rules out working on a level while on the go. For kids in the backseat of a car, this could be a disappointment.

But perhaps those two omissions are worth it because the games created here look so outstanding. The pre-made assets, characters, and backgrounds are vivid and absolutely look the part. Not having to worry about designing characters and other assets frees me up to do what I do best: design awesome levels. And that’s really what this software should be all about. I can’t wait to finish my big Princess Leia Hoth stage, and I can’t wait to see the thousands of other levels people make with this program.

[A copy of Star Wars Bloxels was provided by the manufacturer for this hands-on.]