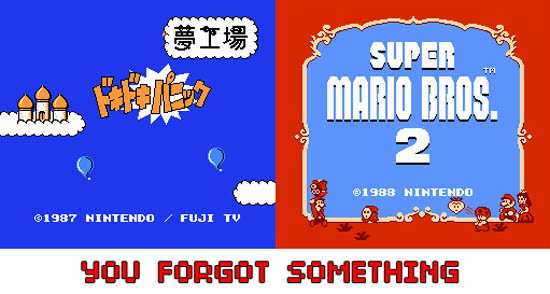 The magic of top ten lists is that almost everyone is a sucker for them. Almost everyone has something to say about the list, whether it be words of praise and agreement, or cries of anger for an “obvious omission.” I usually like to pass on these kinds of lists, but IGN’s Top Ten Tuesday for this week was baited perfectly, so I couldn’t resist.

Their top ten list of the best 8-bit soundtracks isn’t necessarily bad, though it should’ve been called “Best 8-bit NES soundtracks,” as no other console was mentioned. As a fellow game music fan, I’d say that they covered many of the “given” bases rather well. It was good to see classic soundtracks like Metroid and Castlevania, both of which had us humming along from the beginning. There’s also some pretty classy nods to Wizards and Warriors and Shadowgate — color me impressed. Additional props go to the inclusion of Dr. Mario, which is one of the few 8-bit games that could make gamers shake their asses, dance club style.

Now for the misses: I have no idea how Blades of Steel made the list. Where is Mega Man II? Where is Final Fantasy? Both Final Fantasy classics “Prelude” and “Victory Theme” were established in the 8-bit days. Also, how is there not the NES version of Tetris on this list? I’d say that they dump Blades of Steel and Punch-Out (good music, but not enough for the top ten) and get these two in there. Also, Koji Kondo’s Doki Doki Panic/Super Mario Bros. 2 deserves to be near the top, and I don’t care what other one needs to be bumped off to do so.

What are your top ten 8-bit soundtracks?