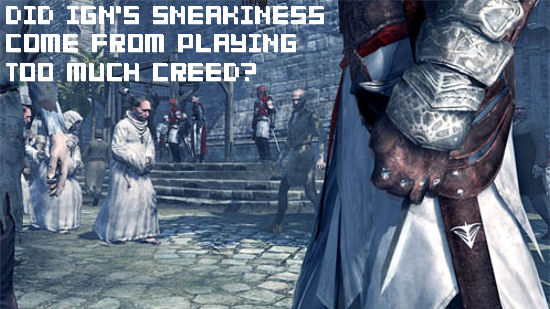 Yesterday I posted a report that IGN had critically slammed the PS3 version of Assassin’s Creed, claiming the framerate issues were so bad, they affected the gameplay and that the former Sony exclusive fared poorly in comparison to the Xbox 360. Lo and behold, I wake up this morning to find the Internet set ablaze with reports that IGN has actually modified the review.

I’m not sure why IGN felt the need to do this — pressure from Sony and/or Ubisoft, a need to impress PS3 fans and keep them reading, or maybe they just didn’t want Destructoid on the case. Either way, this kind of activity makes sites like us, who don’t have the luxury of IGN’s cash and traffic, who have worked hard for our credibility, look bad. It’s not professional behavior, and not behavior I condone. Even if I make a mistake on Destructoid, I keep it here, as my Elder Scrolls/MMO snafu proves.

I’ve already had a few people accuse Destructoid of making it up, though for what reason escapes me. If that’s the case, then I’d also say that this Digg page and this IGN forum thread, which talks about IGN’s framerate complaints, have to be suffering the same group hallucination as my colleagues and I. We’re not the only ones who saw it.

IGN itself has forgotten to wipe all trace of the complaints. In the review, the article now says that “None of [the framerate issue] deters from the gameplay though, so it is forgivable,” while the final verdict states that “The word is beautiful except for the pop-in and troublesome framerate issues. The animations are top-notch, but tough to enjoy with slowdown.” I guess it’s not so unintrusive and forgivable, eh?

I don’t personally care that IGN changed its review. Whatever it needs to do to keep running. Next time though, give me a heads up before I source your work, okay? Considering I’ve worked for IGN before, I’m very disappointed that it’s jeopordized my professional credibility and the esteem of this site, to say the least.

[Update: IGN has explained this as an act of error as opposed to sneakiness. More after the jump]

Well, this story just gets more and more confusing. The review has been rolled back to now include the text that was there in the final publication last night. IGN contacted Destructoid directly to say that the issue was a copy/paste error that had gone overlooked. For whatever reason, the finished publication had been gone into and swapped paragraphs or somesuch, at least by IGN’s reckoning. Confusion abounds afresh.

Crossed wires? Innocent screw ups? Who knows? What I do know, however, is that the people who kept accusing me of making quotes up and keep their traps shut now — I told you it was bloody there.

Through it all though … I still don’t know if I should buy Assassin’s Creed.