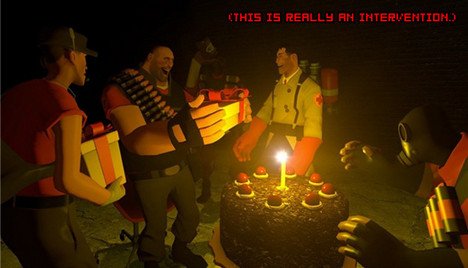 [Editor’s note: Sharpless takes a look at Team Fortress 2 and tells us how he would improve it as part of this month’s Monthly Musing. — CTZ]

In many ways, Team Fortress 2 is kind of the bastard child of The Orange Box. Half-Life 2 and its sequels are regarded as being innovative and quite legendary, and Portal is every games-are-art indief*ck’s favorite squeeze toy. TF2, while respected and well-liked, is the immature, rebellious sibling. It has nothing quasi-revolutionary to add to the gaming world, and it has no immersive narrative to draw people into it.

That said, I bloody love this game. Halo 3 can choke on the bile of its racist 12-year-olds, Gears of War can suffocate under a hulking mass of CliffyB’s hair gel, and CoD4 can just flat-out lick my love pump. While I enjoy all those games, I would much rather spend my time back-stabbing your Snipers, sniping your turrets, and listening to the Heavy laugh psychotically whilst mowing your team down in a hail of hot lead. I love the chaotic-yet-skillful, class-based gameplay and the colorful, endearing characters.

But would I change anything? Yes. Yes, I would. No game is truly perfect, and TF2 could definitely use an Engineer to tighten its screws. And I’m also generally critical as hell, so I’m sure I can come up with a shortlist of changes that would make it slightly more awesome, which you can read about after the jump.

Okay, now, believe me, I’m more than satisfied with the nine brilliant, hilarious characters Valve has already crammed into this game. But wouldn’t it be nice if you could tweak your characters just a little bit? Put a bowtie on the Spy, maybe give him a pipe instead of a cigarette? Perhaps you’d like to put one of those plaid, winged lumberjack hats on the Heavy. It’s not necessary, but it’s small and fun, something Valve would excel at.

Taking it one step further, how about gender? As you can see in the above fan-made image, a female cast is not that ridiculous of a notion. It would certainly make the female-type fans happy, as well as generally adding some always-welcome variety to the mix. And who wouldn’t like to see the Heavy find his soulmate (other than the Medic, that is)?

Another possible avenue of customization is weaponry. Choosing whether your Scout carries a bat or, perhaps, a crowbar (wink, wink) could add yet another fun dimension to the game. Of course, to a degree, Valve has started rolling this out for PC players, with the new additions to the Medic’s arsenal. If only they would make that class-specific loadout menu more robust and add it to the console version. Speaking of which … 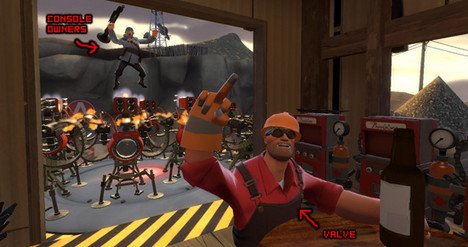 Better Console Support
Yeah, yeah, yeah, Valve is a PC company. I get it. I don’t deny that that’s their niche and they work it really well. However, I am not a PC gaming fan – at least not when it comes to FPSes. Cry me a river. Anyway, it comes as no surprise that Valve is being quite efficient at releasing patches and adding new, fun content to TF2’s PC version. The console versions, however? They’ve seen none of the content, with little hope of it ever arriving. So, what am I proposing?

ANYTHING. New maps, new gametypes, new weapons — hell, even new boots for the Pyro would be welcomed. If Microsoft or Sony insist on charging for it, I’ll bend over and take it like a fanboy. Hear me? Yes, I will let you microtransrape me. And I’m certain that Valve could add these things to the consoles just as easily as to the PC, barring MS and Sony’s inevitable meddling. If Bungie can do it with Halo, then the infinitely more-awesome Valve can do it too.

Frankly, while playing TF2 on a console is still fun, it’s kind of like playing in a cage. A not-as-fun-as-PC cage. Go play TF2 on a console. Chances are, you’ll never once see a single person on your friend list playing it, unless you happened to have met them while playing the game. I’m not suggesting that the PC players shouldn’t be shown some favoritism, but it would be nice if, as a console TF2 player, I didn’t feel like Valve’s red-headed stepchild. 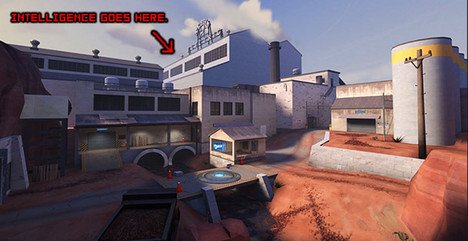 More, and More-Versatile, Maps
I’m pretty sure that most people out there will agree with me when I say that Team Fortress 2 doesn’t have nearly enough maps to choose from. The maps it does have are great, but the seven (technically, eight) maps do tend to grow somewhat old over time. (Admittedly, to their credit, they don’t grow nearly as old as most maps in certain other, more popular shooters do.) Starting with a minimum of ten, and releasing additional maps as time goes on, seems like a good plan to me.

Another problem with the game’s seven unique maps is that only one of them can be used for more than one gametype. For example, 2Fort is only capable of being a CTF map, while Hydro is only for Territory Control. I can see the benefits to building a map specifically for a certain gametype, but it greatly limits both the map’s usefulness and the game’s potential. By allowing some flexibility, fans could come up with some surprisingly fun map/gametype combos.

And while we’re at it, why not drop in a dumbed-down version of Garry’s Mod for the console players, while you’re at it? Perhaps something more akin to Halo 3’s “Forge” map editor, where players can move certain elements around and create maps that look almost nothing like their original layout. Not essential, but an interesting thought. And yes, I know that Garry’s Mod is superior. Go lie down in a volcano. 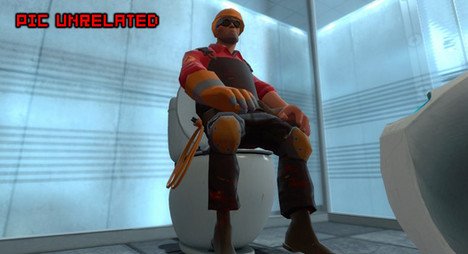 Split-screen Multiplayer
Lastly, one issue that’s often come up for me is the lack of split-screen. Of course, I realize that one-on-one games are thoroughly boring and virtually useless. However, I can’t count the number of times I’ve been playing Halo 3 online with my friend beside me, and I’ve gotten the urge to fire up some Team Fortress 2, only to remember, “Oh, that’s right. We can’t.” Allowing for two players would definitely boost the playability, as I’m sure I’m not alone on this one.

So, there you have it. That’s probably not an extensive list of things that many people would consider issues, but it’s more or less everything that bothers me. Sure, I’d like more spawn points, so I didn’t have to walk all the way across Dustbowl to get back to the second control point, but that’s all part of the game. Constructive criticism is one thing, but bitching is anoth …

Oh, sorry. I forgot that I was on the Internet for a second. Some logic slipped out. Won’t happen again. Anyway, how would you improve your TF2 experience, be it on a console or on a PC?