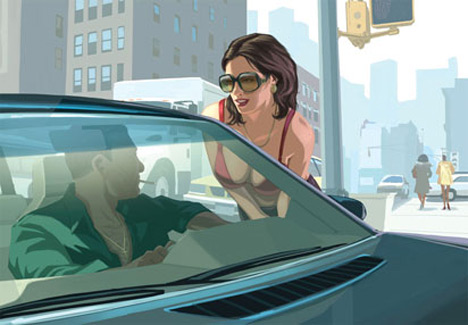 There is no question that Rockstar’s current Grand Theft Auto formula is bringing in money, but how memorable of an experience does each game really provide? Grand Theft Auto IV has received (almost) universally rave reviews, but ten years from now, how will it be remembered? Some will undoubtedly look back on GTA IV as one of the greatest games they’ve ever played, while others will only know it as “The one with the shiny Russian guy”, much like fourth entryin another beloved franchise. It’s not that GTA IV isn’t great; just that at it’s core, it’s just more GTA.

What could Rockstar do from here to create a truly different, memorable, and meaningful GTA experience?

In order to fully utilize the opportunities that come with making a game with the GTA name, one must know what that name really means. GTA may stand for the words “grand theft auto,” but anyone who’s played the games knows that stealing cars is just an expression of the game’s true meaning: It’s fun to be a sociopath. There is a part of every person that just wants  to cut loose and break rules; rules of law, rules of political correctness, and rules of basic human decency. GTA gives us the opportunity to break those rules in a safe, consequence free environment. Stealing cars, murdering strangers, dealing drugs, hiring hookers, all of it is food for the animal inside of us: a filthy beast whose code of conduct is dictated solely by the pleasure principal.

The sociopath archetype is no stranger to pop culture, and the GTA games have thus far done a fantastic job of borrowing from prior sociopath stories found in other media. GTA Vice City paid tribute to Goodfellas and Scarface, GTA San Andreas took its cues from the neo-blacksploitation “gangsta” culture of the mid-1990’s, while GTA IV’s scenario plays out like a bizarre amalgamation of the comic sociopath Borat and classic PTSD fueled serial killer John Rambo.

My problem with the past GTA games and their influences is that they are all so obvious. The generic “bad ass”, be it a Caucasian gangster, a Black “Gangsta”, or the shell shocked foreign veteran are all limited in their capacity for range of emotion. Scarface, Fifty Cent, and Rambo (and their GTA counterparts) are apt to express no more than the following three emotions: anger, worry, and boredom.

I propose something more.

Imagine a GTA game staring a woman; a woman addicted to unnamed substances, who steals cars, deals drugs, screws anyone for money, all with the disaffected, disinterested stare of a monster. Already we have the opportunity for more genuinely original narrative scenarios than any GTA game in years, all sure to bring an entirely new level of controversy to the GTA name. For starters, people across the country, even some GTA fans, are sure to say right off the bat that being a hooker in a video game goes too far. To these people I pose one question: why is being a hooker worse than hiring a hooker? Every GTA game since GTA III has featured the option to have sex with hookers, why is it some how worse to actually become one?

While our hooker hero -lets call her Gladys- would remain true to brutal, barbaric psychological motivations traditionally found in the world of GTA (become king of the hill, kill all rivals, trust no one), she would also possess an instinct that previous GTA protagonists were incapable of: the maternal instinct. Gladys would have two children, a thirteen-year-old boy (who loves M rated games) and a seven-year-old daughter (who owns every iteration of the Imagine: Babyz series).

Gladys works to meet her own primitive urges to steal from, kill, and/or ball who ever she wants, while working equally hard to hide her “job” from her children (not to mention the Department of Social Services). These kids are the only two people on Earth that Gladys cares about other than herself, and despite the fact that she is a horrible person, she still wants her kids to turn out alright. Imagine the irony as Gladys lectures her son on playing a GTA-like game, while she herself is as lowly and revolting as any previous GTA anti-hero. She’s slaps his ass and locks him in his room without supper for playing GTA, then hits the streets to live GTA.

Hypocrisy of this kind is funny because it’s true to life, and it’s about time GTA  starts mocking some of their worst detractors; abusive parents. How many kids have been punished via a beating for playing violent video games? I’ve seen it happen ever since the days of Splatterhouse, and I’m sure it’s happening with many a GTA IV loving kid today.

This proposed GTA game, GTA:Whore, wouldn’t have to stop there with its mockery of parents against violent videogames. There are many other “enemies” of GTA that could get a similar treatment.  As Gladys grows in both her ability to hide her true nature from her kids and her skills at networking up the ladder of the criminal underworld, she eventually builds a Heidi Fliess like empire of blackmail, high paying Johns, and drug smuggling, all under the guise of the presumed legitimate cosmetic and jewelery company “Pearl Necklace”. In the spirit of GTA: VC, Gladys becomes a high powered CEO, still taking the time (and pleasure) in committing crimes on her own, while simultaneously running her own personal crime army.

From here, our society’s obsession with the super rich could be fully exploited: CEOs, children of CEOs, and the people who love them could all be roasted in an even more pointed and detailed manner than in previous GTA games. As Gladys blackmails Donald Trump, Paris Hilton, and Charlie Sheen look-a-likes with the terrible things they’ve done with her, we’d get a virtual glimpse of the underbelly of high society as it most likely exists (but is edited out of reality TV).

From there, it’s off to politics. It would only make sense for Gladys, the world’s richest woman, to make a run for the presidency. The opportunities for parody in this, GTA:Whore‘s “third act”, are perhaps the most bountiful. After all, how different are the lives of our nation’s politicians than those of characters in GTA? How many of out nations governors have been caught doing coke with hookers only to be re-elected? And lets not forget that it wasn’t that long ago that out own Vice President shot an old man in the face. Not only did the politician avoid jail time, but eventually he got an apology from the very man he shot. We’re only one step away from a politician that is actually dealing drugs and killing people who is later congratulated.

The potential for sub-plots in the “Whore, CEO, Politician” story arc are truly endless. Love interests for Gladys could include a Bill Clinton-like figure, A Gover-nator, a P Diddy-esque entertainment mogul, the Pope, Oprah, any of our world’s myriad of high profile men in power. Gladys’s kids could get their own atrocious reality show, be victims of blackmail and violence themselves, and, as the apple seldom falls far from the tree, could both potentially succumb to lives of crime. Will Gladys care enough about her kids to pull away from her amoral life? Will they live long enough for her to even make that choice? When the game wraps up and all is said and done, Gladys will have seen the level of psychopathic tendencies necessary to be an effective Politician/C.E.O., will she prefer life on the streets? All questions only possible in a GTA game where the protagonist has motivations beyond seeking money, power, and revenge.

A GTA game starring a woman could work. Despite its history of questionable  depictions of women, the GTA series has been surprisingly successful with female audiences. That’s not to say men should be alienated. That shouldn’t be an issue though, as since Lara Croft made her debut over ten years ago, it’s been clear that games starring women have the ability to appeal to both sexes.

There is no reason not to take this kind of chance with the GTA franchise, as there is no franchise more bulletproof. With the small risk of simply casting a single mother as it’s protagonist, Rockstar could effectively multiply the shock value and social commentary of the GTA experience ten-fold. In this case, adding a female lead wouldn’t just be a gimmick. It would be a window to a narrative experience more rich and multi-dimensional than any GTA before it.