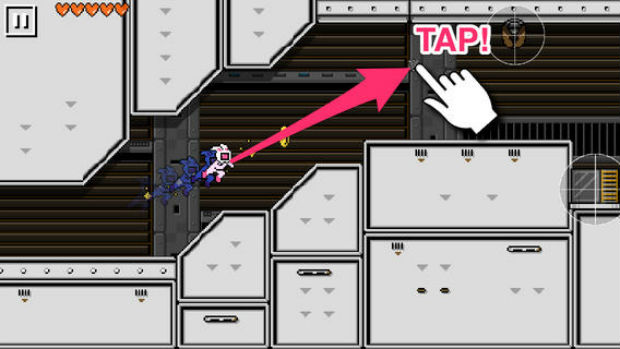 I was browsing through the App Store on my weekly search, and came across a rather odd looking game. It appeared to be a Mega Man homage, even going so far as having the same 8-bit style and sprite movements. It’s called UsagiMan (Rabbit Man, in English), and it happens to be a pretty awesome free game.

Basically, instead of forcing you to use an unwieldly virtual d-pad to get around, you’ll tap the screen to “hook” onto certain parts and fling yourself forward. You can tap on enemies to fire your arm cannon, and while they’re stunned, you can go for a fling smash move for more damage. There are even kooky boss fights and some other homages like “Wily Gates” to pass through.

Although it is ad-supported (and they get in the way sometimes), you’ll be able to rocket your way through the game’s relatively short amount of levels all the same, and pick up a few upgrades along the way.