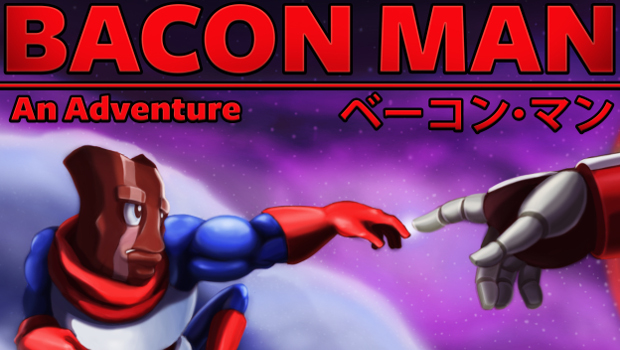 A lot of people complain that every platformer on Kickstarter uses 2D sprite art. Well quitcher bitchin. This one uses fancy looking polygons and it looks pretty great. The game is called Bacon Man and it’s “an adventure” where you fight “sentient, frozen burgers”. The burgers are called Iceburgs. There is also a playable character named Feta, enemies called Shrimp Valkyries, and a nemesis named Pork King. Yes, the food puns are swarming like angry bees on this one.

It’s a surprisingly expensive looking game given its humble Kickstarter goal of $20,000. Sometimes I think those low goals work against a developer, like with Ninja Pizza Girl. Potential backers may be thinking “If you only need a few thousand, why don’t you just ask your Dad? Doesn’t he love you? Why should I support your game if your Dad doesn’t even like it? I hate you too now.” On the other hand, Bacon Man is currently sitting at around 98% on Steam Greenlight. Maybe the Steam community doesn’t care as much about a Dad’s love.

Or maybe people think the game looks too much like Super Meat Boy? Both games have spinning spikes and heroes that are made out of some kind of muscle tissue, so… it’s a rip off? We’ve got exclusive comment from Neal Laurenza of Skymap Games on the soon-to-be sizzling Meat Boy Vs. Bacon Man comparison controversy below. It’ll burn you up.

“Like Meat Boy, the game is extremely difficult and teaches players by throwing them into a spike pit. What makes Bacon Man different is it has moves you can use to fight or flee enemies. Every action is also a method of mobility, so an uppercut or a toaster gun shot can propel you into the air a tiny bit. Learn to master these moves to get awesome movement and serious damage.

Bacon Man has a weird sense of humor and plays differently from other platformers. We think that the game will make a name for itself in the burgeoning genre or meat based platforming games. :)”

Sounds like the “Shotgun Jetpack” from Cave Story but all the time. Pretty neat. It’s also got local co-op, which may be good news for those who like huddling around their computer monitors with groups of friends like so many sausage links, but the rest of us may be hoping for a console port. Thankfully, the game is being built in Unreal Engine 3 specifically for that purpose, so as long as it makes that measly $20K, I bet we’ll see Bacon Man on TVs eventually.