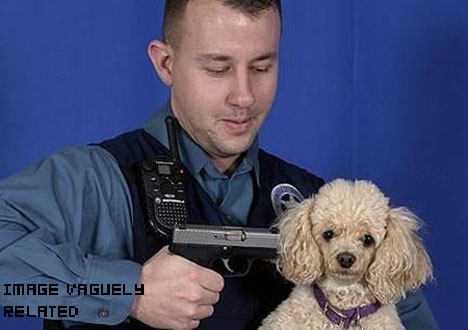 The new videos on the Japanese DR:CTYD website (seen by selecting chapters 5 and 6) feature something I didn’t think I’d ever see in a video game; a man playing fetch with zombie poodles by chucking saw blades at their heads. The poor little dead things really get into it, too! It’s cute, gross, sad and funny all at the same time.

Other highlights include some creative uses for corn oil, Frank blowing away tons of zombies with a wide variety of weapons, and the introduction of Otis’s new side-kick; a guy named Greg who can apparently teleport you to the gun shop any time you want. Sure it’s weird, but given how the game will involve a lot more gun play than the original, it makes sense.

That’s not all the DR:CTYD news for the night! Over at Joystiq.Nintendo, there’s a story on the game’s new “sniper mode”; a series of stand alone target practice exercises that involve shooting red parrots (but not blue parrots), zombies (but not the people they’re munching on) and zombies in servebot masks (but not the nearly identical looking humans hanging out next to the zombies, also wearing servebot masks).

Crap, I just realized this will probably be the last news I post about DR:CTYD before it comes out early next week. News about a controversial down-port/remake of a 360 game that people hate to see come to the Wii, I’LL MISS YOU!!!

Hey, anyone got any Dead Space: Extraction news lying around that I can post?