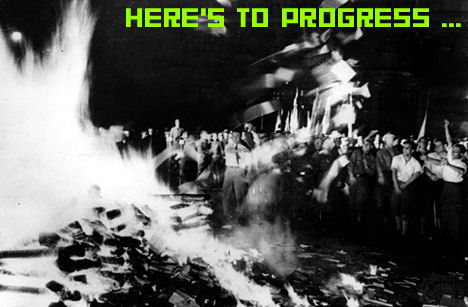 Simply amazing. Yet another moron has come out of the woodwork to jump on the “games are evil” train and share his myopic, frightened views with the world. The real kicker here is that he suggests having a “game burning” without the slightest trace of irony.

Rev. Richard Patrick had this to say, blaming entertainment for crime, rather than, y’know, criminals:

We are considering having something similar to a rally where parents and children can bring CDs and video games that they consider are destructive to the mind set of our youth and have a burning, just like they had a gun buyback last year…

[Violent media] has a tremendous influence on young people and violence. That’s basically all they see. Most of them try to emulate what they see, when in reality, the people they see don’t even live in those communities. Some of the rappers they see on TV portraying crime don’t live in the urban areas — they live in the suburbs somewhere. It’s all a facade.

Preach on, Reverend! I’ll be sure to hold my tongue when you convince children to burn their videogames because they’re being “influenced” by them, not that you’d be doing anything like that, right? Hypocrite.

It’s just scary that the word “burning” can be casually tossed around like that, as if it’s completely natural and not at all mental. Society really hasn’t traveled far from the days when books were scary to crowds of clucking morons, no matter how much we think we’ve evolved as a species.