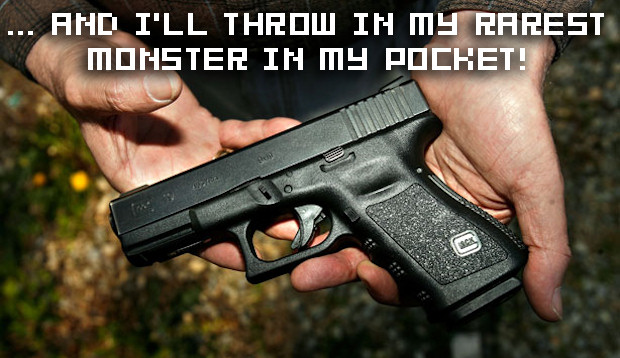 A foolish child caused his middle school to be locked down this past week after bringing in a handgun. However, rather than pay tribute to Columbine or Virginia Tech, the boy had brought the firearm in merely to swap it — for a PlayStation Portable.

The boy nabbed the gun from his father’s collection, and brought it to Mason Middle School in Tacoma to trade with another kid. When I was his age, it was all about swapping POGs and Mini Boglins. I now have the image of kids rifling through an armory like it was a deck of Pokémon Cards going, “Got, got, need, got, got, got need, need, got. I’ll swaps yer .45 for my Winchester.” What is the world coming to?

The gun wasn’t loaded, but he did bring some ammo with him. The boy’s father also stated that a second gun had gone missing, and the school was locked down following rumors that it was floating around the campus somewhere. The boy himself is in juvenile detention.

It’s where he belongs, too. Trying to trade a gun for a PSP? What a bad deal.