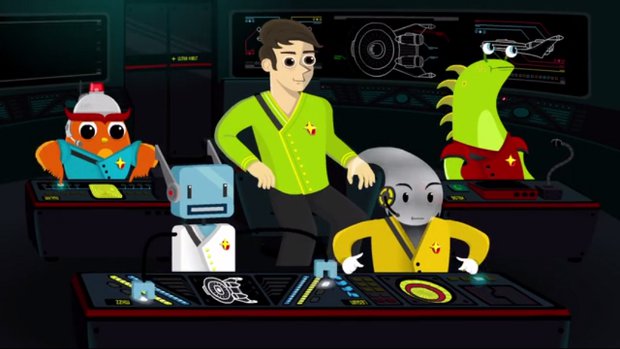 Ditch that keyboard and get yourself a spaceship

Last we saw Icarus Proudbottom, he was teaching us typing, and before that he was demonstrating his chocolate fountain. Suffice it to say, the Icarus Proudbottom franchise is all over the place, in the best way possible. Now, Icarus takes to the stars as the captain of a spaceship in Icarus Proudbottom: Starship Captain.

Though the previous titles in the series were relatively short affairs, Starship Captain aims to be a longer, more fleshed out experience. Also unlike previous games, it will feature an updated art style; Holy Wow Studios explains that the previous pixel art style did not gel with the setting and gameplay. It is being billed as a cross between Artemis Spaceship Bridge Simulator and old LucasArts adventure games.

Due to its expanded scope, Icarus Proudbottom: Starship Captain will not be free like The Curse of the Chocolate Fountain or Teaches Typing, and it will be seeking funding on Kickstarter. Holy Wow is shooting for $50,000 as its initial goal, with plans to release on PC and Mac initially, then Android and iOS later.