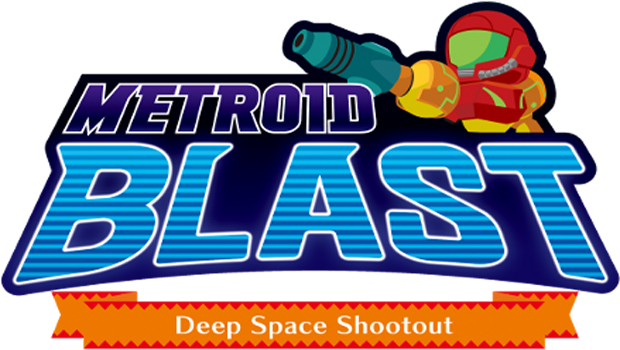 [Note: This was my first run through the game, before I figured out that you can jump. Thanks to Mike Futter of Ripten for hanging out with me.]

There is no denying that Other M didn’t live up to the standards of many Metroid fans, and you can count me among the people that felt let down by the game. Though I didn’t find Other M‘s writing to be as bad as some made out to be (it make sense that an orphan raised by alien people who spends most of her time inside a giant robotic suit might not have the best social skills), the way the game handled combat often left me cold. Auto-aiming in a Metroid game just felt wrong.

That’s part of why Nintendo Land: Metroid Blast felt so right. It offers an arcade-style take on how a third-person Metroid game could play, and despite the fact that it’s just part of a “mini-game collection,” it still plays more like the other Metroid titles than Other M did.

When playing as the character on the ground, you have all of Samus’ standard powers at your disposal; arm cannon (which can be aimed in any direction), morph ball, grapple beam, and jump. The jump distance is really short, however. It’s best used to dodge enemy fire than to traverse the landscape.

Dodge moves can be a risky element design-wise, as players may take to spamming them. Metroid Blast prevents that from happening by making every third consecutive jump end in a goofy “victory pose,” like an Olympic gymnast who just pulled off a triple flip. You’re frozen in place during this pose, totally vulnerable, which will gently teach players not to abuse the game’s dodge mechanic while also being adorable.

With the basics established, the game throws waves of enemies at you. It’s your task to find the best position in the environment to take them out. In my short time with the game, I saw traditional Metroid enemies like Geemers, Space Pirates, and Wavers, all depicted in a cute, super-deformed style that ties all the “attractions” in Nintendo Land together. Wavers attack from overhead, so you’ll have to keep your eyes up to keep track of them. Another option is to grapple to higher ground or teleport to platforms above in order to get a better shot. It felt like there were multiple ways to cope with most situations, and plenty of room to expand your strategy.

Geemers are the same defenseless little porcupine crabs you remember from prior Metroid titles, though they could be pretty intimidating in large numbers. Space Pirates are another thing entirely. They are quick to take cover and fire back, turning the game into more of a shootout and less of a target practice. It only takes three hits to die in Metroid Blast (you keep track with a Dead Space-style in game HUD on the player’s back), so you can’t be careless while taking on a horde of enemies who can give as good as they get. 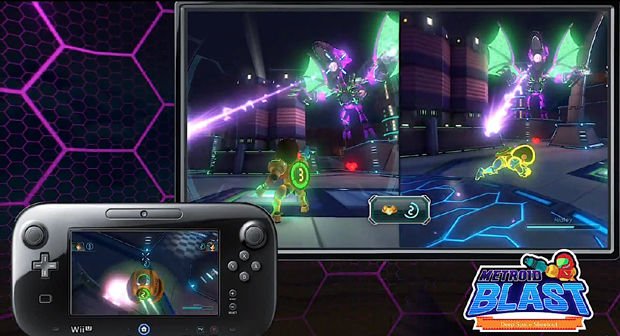 If you’re playing co-op with someone using the Wii U GamePad, they can provide cover fire from the skies in a cute miniature version of Samus’ ship. While the added mobility of the ship makes it a lot easier to dodge enemy fire, it also makes it harder to land a shot or to grab power-ups. When my co-op friend in the ship (Mike Futter) was finally blown out of the sky, he crash landed in a dramatic fashion that had us both freaked out.

The game wasn’t over yet, though. Unlike in other Nintendo Land attractions like Zelda: Battle Quest and Pikmin Adventure, you don’t share health with your crew in Metroid Blast. Instead of game over, my pilot pal emerged from his destroyed vehicle, and began running around the battlefield half naked, unarmed and under dressed. I quickly shot up some enemies in hopes that they may drop some health for him, as one more hit would have presumably been the end of him. A couple of dead Space Pirates later and I scored him a heart. As soon as he grabbed it, his armor was back, and a new ship instantly formed for him to fly off on. Before long, we’d blown all their asses away and it was on to the next level.

That was my experience from level five of Metroid Blast‘s co-op campaign mode. I saw at least seven more levels after that, and who knows what else from there. We know that eventually you’ll be taking on Ridley, and with any luck, more Metroid icons like Kraid and Mother Brain.

All Metroid Blast needs is the inclusion of a real, Metroid style floaty jump, and I’d be ready to see a full-fledged Metroid title that plays just like this. In the meantime, I’ll be playing the crap out of the game when it drops on November 18th. It’s among my favorite in the Nintendo Land package. Metroid fans, and fans of local co-op shooters, should definitely give it a shot. It’s come a long way since 2011.