Dropsy: A Point & Click Hugventure is impossible to play without thinking of the phantasmagorical adventures we embark upon when we go to sleep. Its technicolor dreamscape and overwhelming positivity just might negate any coulrophobia you might harbour.

There’s a certain sentimentality that makes Dropsy a more compelling adventure game than I would have suspected. 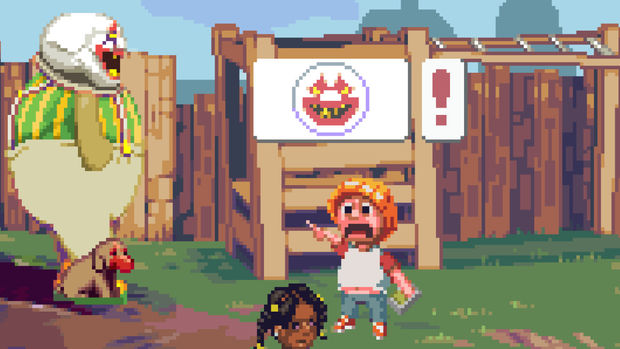 Dropsy was once a beloved clown and hometown celebrity, and his discomforting visage was overridden by his ability to bring joy to all. He performed with his parents in a Big Top circus not far from a small town, until a horrible fire tarnished his life and reputation. Following his mother’s death, Dropsy, his dog Eughh, and his father live in the remnants of the circus tent, trying to scrape together change via odd jobs to stay alive.

Now that I’ve got you all good and sad, I want you to know that despite the tragedy Dropsy has endured, his primary motivation is to love everyone the way he wants to be loved. Even though he looks like an overall-clad specter caked in greasepaint, he wants to go around town and hug anyone who will let him. Problem is, most people aren’t receptive to a damp, creepy clown getting any where near them. Dropsy’s inability to speak to humans doesn’t help, either.

This is where the point & click puzzles come into play. Each character you meet has small cartoon bubbles over their heads that give you some hint as to what they want. A little girl might be upset that her flower isn’t growing, or a homeless woman might be cold and starving. After interpreting these hints and solving a light puzzle (usually involving handing someone the correct item), you’ll be able to hug them. I get the warm fuzzies each time I figure out what someone wants and earn that damn hug that Dropsy so desperately deserves. 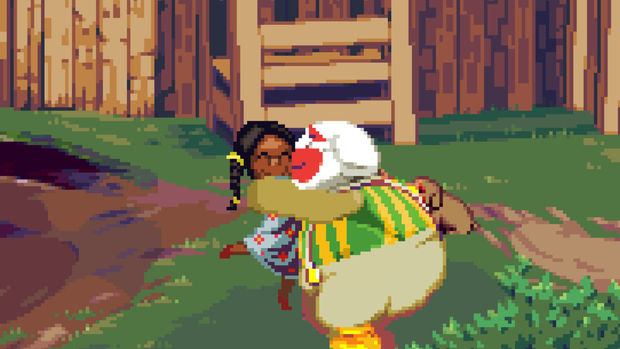 Surreal dreams and initial objectives (starting with placing a picture on your mother’s grave) provide context for Dropsy’s actions. A game where you’re earning hugs might seem directionless to some, but the non-linear exploration in Dropsy punctuated by meaningful story beats was enough to keep me going through this beta. Whether I was getting closer to my father and learning how to deal with our new lives or fist-bumping a bouncer to earn his respect, my time as a clown felt well-spent.

A day/night cycle brings in new people and challenges to interact with. I’m already becoming intimately familiar with these digital strangers as I find out what they want most. The lack of dialogue and text (which makes the game playable in any region!) add to this dreamlike world. Instead of listening to vocal perfomances, I’m interpreting people’s needs based on small pictures and my surroundings, and so far the solutions always feel within reach and never far-fetched. Dropsy definitely isn’t The Longest Journey, but I don’t think I’d have it any other way.

Chris Schlarb’s music deserves special mention, as I rarely feel as optimistic as I do while playing Dropsy. The musical styles change from area to area and range from smooth jazz to a sort-of prog rock. Regardless of genre, it’s always brimming with the earnestness you feel when you’re about to tell someone you love them for the first time. The corners of my mouth felt like magnets of the same polarity of my chin, where no matter how bad my day was, a smile was going to happen.

I’m probably a tad more than halfway through Dropsy now, but I’ll have more to say in a review after the game’s release on September 10.