‘It’ll clean you out, but it’ll leave you hollow inside’ ~ Frank Drebin

When classic-style sprite-based graphics came back into fashion a few years ago, a lot of people called it a retro revival. Truth is, good old dot art never really went away. Polygons may have largely taken over during the PS1 and PS2 eras, but you could still get great 2D games on the GBA and DS during that time. Case in point, Gekido: Urban Fighters was a PS1 game first, with chunky butt textures and thicc-as-hell polys to spare, and it did OK, but it wasn’t until Gekido Advance: Kintaro’s Revenge hit the GBA in 2002 that people were really impressed with how these games look.

That’s probably why out of the two games, it’s Gekido Advance: Kintaro’s Revenge (now re-titled without the Advance part of the name) that’s been re-released on the Switch. Those classic sprites still hold up great, even by today’s standards, making it one of the better-looking games in its genre on the Switch eShop. It also adds two-player co-op, which is a fine addition, though it’s a shame they weren’t able to give the new protagonist a standing animation. That’s no big deal though. The problem is, the game holds tight to the limited replay system of the arcade games that inspired it, but it drops the classic structure of titles like Final Fight and Double Dragon in favor of a slow-paced, key-hunting, “adventure” framework.

The first stage of Gekido: Kintaro’s Revenge is a small village that you can dash across on foot in about a minute. That’s including going inside all the homes with open doors and exploring every nook and cranny. Still, it took me close to an hour to beat the first stage after initially booting up the game because of all the backtracking and random enemies that pop up.

When I say pop up, I mean literally. Hordes of undead monsters climb out of the ground at a near constant basis because Gekido: Kintaro’s Revenge is also a zombie game for some reason.

These zombies are a weird match for game that already has a jumbled aesthetic. Though it takes place in our present day, everyone here is dressed in the style of feudal Japan, and more so, no one seems very surprised when zombies suddenly show up and start killing everyone. Tetsuo, the game’s lead character, looks more shocked at the sight of a woman who knows how to fight in stage two than he is by a ghoul armed with bone knives who tries to stab him at the start of stage one. Hey Tetsuo, I’m the one who’s watched the past eight years of The Walking Dead as they’ve originally aired, not you. You don’t have any right to be more desensitized to zombies than I am. 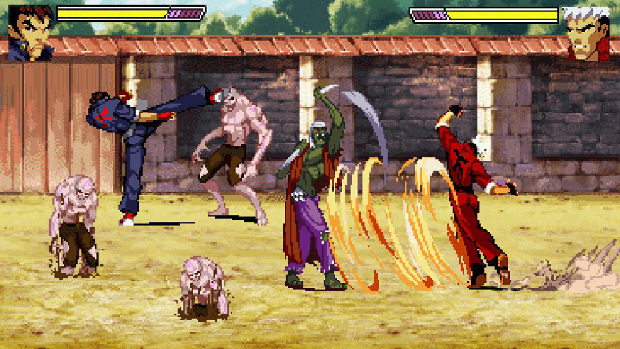 Still, the mix of monsters, cliché kung-fu fighters, fashion boys, and random animal enemies like bats and crows makes for a fun trip down video-game-logic lane. I’d be eating it all up if it weren’t for the fact that the game can be a slog. It’s common to run into a locked door, be forced to backtrack through a bunch of new enemies that have spawned in areas you’d previously cleared, find the key, then wade back to the door from earlier, only to realize that you brought the wrong key for that door. Then it’s off to hunt for a new door for your key with the hopes that behind that door, you’ll find a new key to use for your old door from before. It’s a real chore.

I don’t mind when a game has artificial padding, because let’s face it, all games are artificial, and more importantly, padding doesn’t have to be painful. I’ll run around the same town in Animal Crossing for years in a row, catching the same bugs and shaking the same trees over and over, because it doesn’t feel like work. It feels like vacation.

Sadly, Gekido definitely finds itself on the wrong side of that binary more often than not. With only a couple of combos to learn and no block button to speak of, combat in the game gets repetitive pretty early on. They try to mix it up by dropping random power-ups all over the place, but about half of them actually screw you over (slow you down, reverse your controls, etc.) and even the ones that are helpful aren’t all that interesting.

Sometimes it feels like talking to a bored parent who can’t think of anything to talk to you about but they desperately want to engage with you so they just spit out nonsense words like “Looptid” in hopes of getting the conversation going. What, your mom never calls you up in the middle of the night and just starts saying “Looptid” over and over again? Huh. I guess it’s just me then.

It’s not all bad with Gekido: Kintaro’s Revenge though. The graphics really are a treat most of the time, and the co-op works great with split Joy-Con. The boss fights are also a standout, as they require some actual strategy, which is a nice change of pace from the monotonous combat that leads up to most of them. The devs also added some new modes like Survival and Relic Hunter. They keep the base graphics and gameplay the same, but go whole hog on the combat or the exploration/collection aspects of the game, respectively. Neither change things up in any significant way, but if you are looking for an excuse to play a little more with a friend, you could do worse.

Just get ready to be sad if you ever run out of lives. Survival and Relic Hunter modes have no continues, so they are purely high score affairs. In the main campaign, each stage works as a permanent checkpoint, but when you restart, you don’t get all your lives back. Instead you start with however many guys you had when you first got to that stage. That means if you get to the last stage with one life, and you lose it, then you have to start the stage all over again with just that one life. If that’s how things turn out for you, then you may want to bite the bullet and just start over from the top in hopes that you can get to the last stage with more lives the second time around.

If that kind of recycled content and unashamed filler drives you bananas, then you may be better off just watching a long play of this one on YouTube.