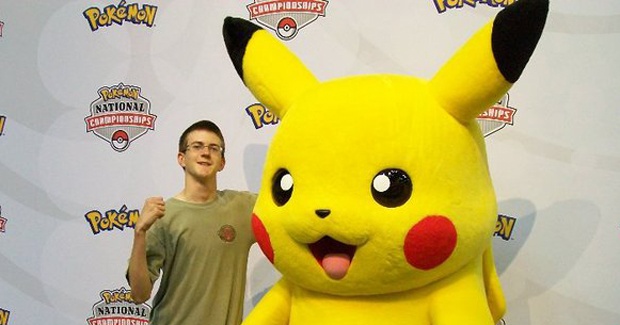 A lot of people see Pokemon as a simple game marketed to children and young adults suffering from childhood nostalgia. That perception discounts the highly popular competitive scene that still drives millions of players to keep up with the series. You can play Pokemon as a lighthearted turn based RPG about catching a bunch of weird monsters, or you can take it to another level. To a competitive Pokemon player, the game offers a nearly endless combination of moves, stats, strengths and weaknesses to coordinate and organize into a fighting force of extraordinary magnitude.

We recently caught up with Ray Rizzo, 3 time Pokemon World Champion, to discuss his thoughts on competitive play, the future of the series, and how to be like no one ever was.

Destructoid: What compels you to be a Pokemon Master? What makes the game more exciting to you than other competitive videogames?

Pokemon is a game I have been playing since I was a kid, so it’s something I find enjoyable. I think that inspired me to become better at it. Compared to a lot of the other, more mainstream, competitive games, Pokemon is a turn based strategy game where you are trying to outplay your opponent each turn (and in some cases you are thinking multiple turns ahead). I still find the more mainstream games like Halo, Call of Duty, or Super Smash Bros. enjoyable, but I like how much more of a strategy based game Pokemon is compared to them.

With every iteration of Pokemon, the developers introduce new styles of battle, with the latest being 3-on-3 rotation battles (introduced in Pokemon Black/White). Why do you think that these new forms of play don’t tend to catch on in the competitive scene?

What are the top five things someone needs to know in order to play competitive Pokemon?

You need to play online against other players, not just the computers in the game. You need to be willing to improve and not give up, because you are likely going to lose most of your battles when you first start out playing against human players. You need to think about why you are using the Pokemon/Attacks you use, and how they mesh with each other, specifically type matchups. Some of the more advanced aspects of the game are not easy to figure out. It’s beneficial to join an online community to make new friends, as well as strategize with and battle other players. Lastly, you need to remember to still have fun. I’ve seen a few players take the game too seriously. When you lose, you should still try to learn from it and improve yourself, but remember your primary reason for playing any video game is for fun, and competitive Pokemon is no exception.

If you were developing the next Pokemon game, what are some of the features that you would (or wouldn’t) include?

I would like to see more 3D incorporated in the games. I enjoyed the 3D GameCube Pokemon games a while back, and I think utilizing the 3DS or the upcoming Wii U to make another 3D Pokemon game would be cool. I would also like to see the number of alternate forms of Pokemon get cut down. It was cool and unique the first few times, but now too many Pokemon are getting new forms in my opinion.