Surgeon Simulator is the type of game that easily lends itself to stories. The precise mechanics involved provide anecdotes wherein each player can fondly recall specific moments of their playthrough. Though my time as a surgeon has been limited and feels as though it was eons ago, I still remember my first transplant in vivid detail.

When thinking of the various experiences that might be improved with VR, Surgeon Simulator never crossed my mind. Being able to look at my various tools and around the room with a turn of my head didn’t seem necessary. I was wrong. Wearing an Oculus Rift and standing next to an unconscious patient with scalpel in hand makes this feel even more personal. 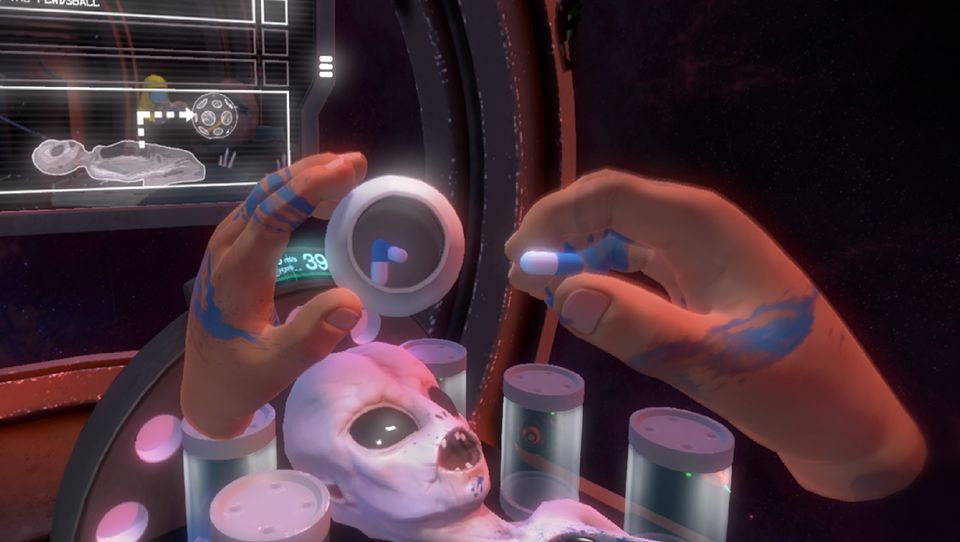 The Oculus Connect 2 event felt very rushed, so I hurried to my demo appointment for some hands-on time with the Rift. A Hollywood-looking Oculus employee charmingly asked what type of genre I wanted to start with. “Horror,” I quickly blurted out, anxiously wanting to experience some spooky VR. He looked taken aback, and quietly said “Well, we don’t — well, I guess aliens are scary…” and booted up Surgeon Simulator. It’s not what I would have picked, but I went with it anyway.

After fitting the headset onto my noggin and the Oculus Touch controllers onto my meathooks, I opened my eyes and found myself aboard a space station. There was an extraterrestrial splayed out on a table, its midsection an open maw hungry for my hands and tools. Beyond the corpse was a window peering out into the void of space. Glancing about the room, I took stock of what surgical instruments I would require. I needed to remove an explosive, glowing orb from the alien’s stomach before it destroyed the station.

As I used my real-life hands to direct their in-game counterparts towards my first tool, Hollywood began recommending I grab the bonesaw. I turned my head in his general direction (remember there was a whole reality between him and I) and told him “Quiet, nurse. I am the doctor now.” I heard a combination of a grunt and a giggle and continued on my way. I grabbed a hatchet and began cutting into the alien. Again, he protested and I cut him off with a “Shhh…”

I let go of the hatchet and realized I was in a zero-g environment. It casually drifted away from me as I turned to my next tool, a four-pointed device that looked like a shuriken. With all my might, I flung it into the alien’s stomach(?) and watched as it began ricocheting off of the various surfaces in the room. Glass was now floating all around me, but I waved it away in annoyance. Next, I grabbed a clock and started smashing it into the alien just to see what would happen. All that happened was a mess that I told Nurse Hollywood to clean up when we were done. 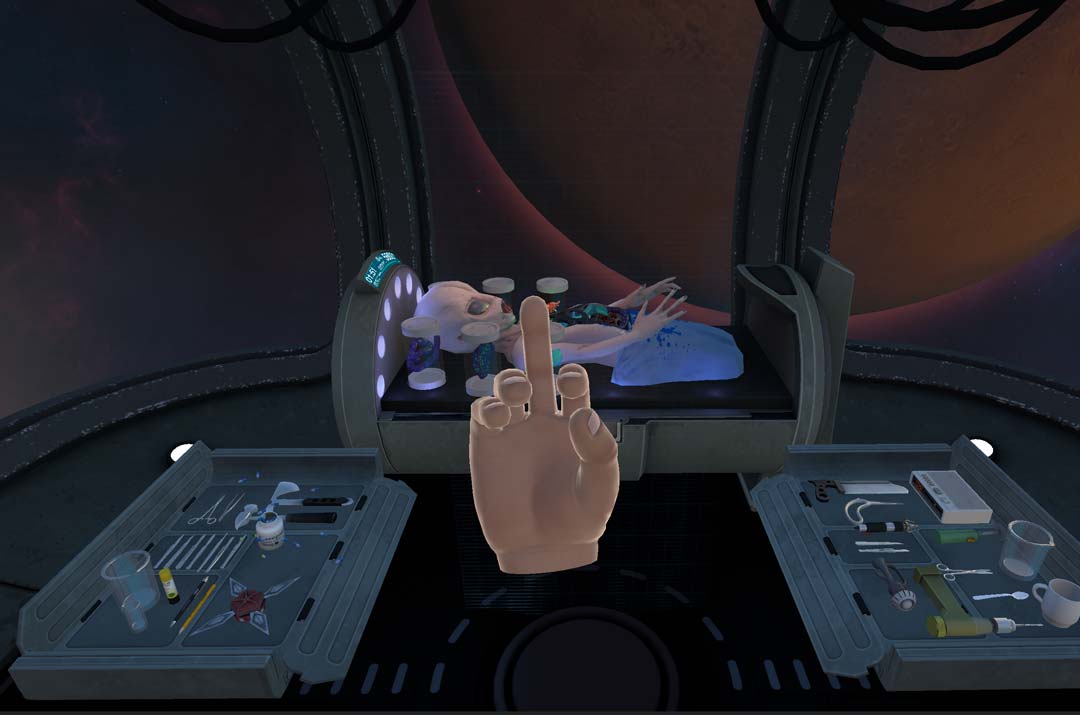 Time was beginning to run short, and I begrudgingly reached for the bonesaw. I hacked into the ribcage-looking protusion and used both hands to grab the orb, and chucked it out the garbage shoot. It drifted outside the window and exploded non-chalantly. To celebrate, I grabbed my alien friend’s cold (I assume) dead hand with my left hand, and gave him a high five with the right. His hand drifted back slowly and without purpose, and Nurse Hollywood, sounding quite afraid, whispered “What just happened? Did you just…” And I nodded triumphantly. I took off the headset and handed it back to the wide-eyed man who wasn’t sure what he had just watched.

The combination of the Oculus Rift and Touch lent Surgeon Simulator more presence, and it helped me role-play (something I don’t really do outside of D&D) even with a stranger staring at me the whole time. Something about shutting out the rest of the world makes you feel more involved, though it’s tough to ignore outside factors. That’s why Nurse Hollywood became one of my surgical instruments; if I was going to look ridiculous in front of him, he was going to be part of it, dammit.