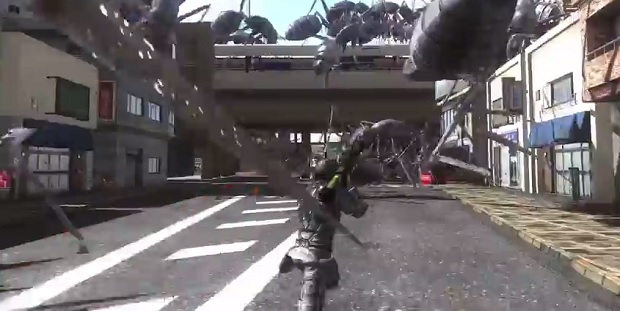 I bet you’re recoiling in shock

In the course of covering videogames, sometimes you go into an appointment knowing exactly what’s going to happen. You know precisely how the game will play and what the demo will be like — everything’s just crystal clear. That’s how my first look at Earth Defense Force 4.1: The Shadow of New Despair on PS4 went. There sure are a lot of bugs, and oh boy, do you ever kill them.

Dropped off in the middle of a giant city, I was given ten minutes to defend Earth with my forces. Equipped with a machine gun and a rocket launcher, I set off to blow as many giant ants into rust-colored oblivion as I possibly could. Real talk: If the game kept track of this sort of thing, I may have done more damage than good. But, we’re here to fulfill our exterminator superhero fantasies, so let’s not dwell on semantics.

Anyone that’s familiar with the franchise won’t be surprised to find out that The Shadow of New Despair isn’t going to push the PS4 to its visual limitations. Right now, everything looks pretty rough, and I’d doubt it ever gets significantly better. Every asset in the game is just more jagged than we’re used in 2014 (and the past several years), but that’s to be expected with EDF. It’s almost a calling card of sorts.

Another calling card is just how much cathartic, dumb fun it can be. Yep, good thing I killed those huge bugs so now I can go take care of the giant ants climbing on the skyscraper and then I can massacre this other group of them. Relentless, unceasing insect murdering. It’s not for everyone, but it looks as if The Shadow of New Despair will be right up EDF fans’ alley. And, that alley will probably house some bugs that needs blown up.